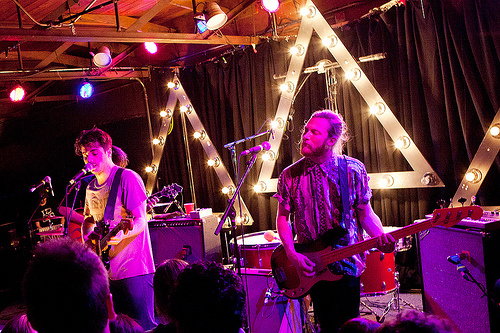 A few weeks ago I showcased a couple of songs from the band Delta Spirit who released a new album in March. I bought that album the day it was released and have listened to it nonstop since then, mostly in the car when I’m shuttling Leta to school or running errands (I gave up NPR until the election is over so that I don’t purposely drive the car into a brick wall).

At first I thought, cool. Good stuff. But the more I listen to it the more I think, SHIT IS REAL. This will end up being in my top five albums of the year.

I cannot recommend this album enough, primarily because it’s pure American rock. It’s loud and thick, layered and passionate. The sound feels like a pair of gloves wrecked from years of heaving wood and tools in an effort to build something bigger and better. And then there’s Matthew Vasquez’s voice, something so distinct and primal and arresting that you feel like you finally found a sound for what it means to ache.

I got to see them live last night at a small venue downtown (when I saw Salt Lake City listed in their tour schedule I may have involuntarily shouted a string of celebratory profanities so colorful that now I can’t take the sacrament FOR YEARS). The show was loud and raucous and rough, but more than that you could feel the mutual appreciation between the band and the crowd: a group of men who’ve worked really hard at something they absolutely love, and the fans who were thankful that they’d put in that kind of heart and sweat into creating something so transforming.

Go see them live if you can. Someone may just end up in the rafters.