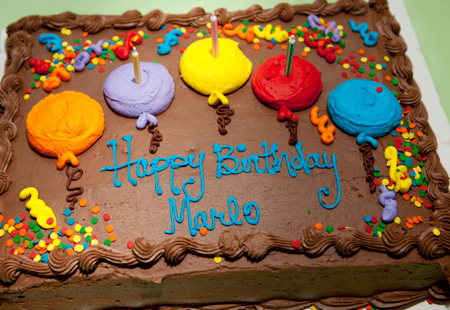 You know how summers go, right? Vacations, college reunions, family reunions, camp, hair implants, breast reduction surgery, that New Kids on the Block Cruise where you actually get to mingle with Jordan Knight. Schedules are crazy, am I right? You know what I’m talking about. Right now you’re thinking about how you had to take time off of work to get in a car with your mom and drive seven hours to spend time with your aunts and uncles in a tent. You didn’t even know you were capable of murder!

So the fact that I actually pulled off a third birthday party for Marlo is nothing short of a miracle. And if this were a certain type of mommyblog you’d soon see exquisitely styled photos of the homemade party favors and cake made from scratch, the colorful bunting bearing her name, the perfectly symmetrical finger sandwiches prepared for adult guests. Listen. I love those mommyblogs and how they make me feel like a total failure.

This mommyblog bought all the food at Costco. Pre-packaged artichoke dip. A bulk bag of chips. Frozen mozzarella sticks and taquitos. A cake selected from a directory, a cake large enough to feed Idaho. I called my family two days prior to her birthday and said, hey! You want to come over and get fat? So, yeah. Very little planning. But man, that kid had a blast. All that attention. All those people there for the free food for her. All those new stuffed animals and bottles of bubbles and that check from her grandfather to be deposited into her college fund. When she turns eighteen she’s going to be like, DUDE! Down payment for my double-wide! My gift to her was a piñata, and because I know nothing about piñatas I had to trust Tyrant’s judgment. He’s half Mexican, so, you know, he learned how to hit a piñata before the doctor cut his umbilical cord. OH! PLEASE TAKE ME SERIOUSLY. Please tell me that I’m being insensitive and that I should know better. Because when it comes to Weimaraners and Mexicans I AM OUT OF CONTROL! See, I thought you just went out and bought a piñata and it was ready to go. Hang it from a tree and let blindfolded kids beat it into pieces. But, no! Piñatas require work. You have to fill them with candy yourself. And then Tyrant says, “We should throw in a few rolls of quarters.”

The? A few rolls of quarters? Those things would come flying out of that piñata, hit a kid in the head and knock him out. MEXICANS ARE MURDERERS!

And he’s like, “There is no way you graduated valedictorian. Only if you were homeschooled.”

I guess you don’t keep the quarters wrapped up in the roll? HA. OKAY. You sprinkle them in with the candy and toys? How was I supposed to know this? It’s not like there is an Internet full of information just sitting out there ready to dispel all of my racist tendencies!

The piñata was probably the most exciting ten minutes of the party if only because my sister’s three boys are each strong enough to juggle a set of Hummers. Every adult had a phone in hand ready to call 911. Marlo barely tapped the thing, and my stepdad mumbled something about how we were going to be there all night when THHWAAACK! One of my sister’s boys just looked at the thing and its head popped off. And it was like those kids had never seen quarters before! No one fought over the chocolate or the gum or the tiny train whistles. They were wrestling and fighting each other over quarters. And so here is where I give Tyrant credit where credit is due. It was all his idea. And so the medical bill for my nephew’s black eye is coming straight out of his paycheck.