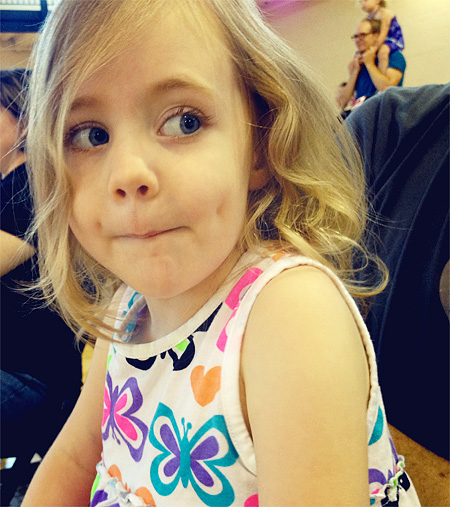 “You want a bite of my potato?” I asked.

She nodded, her dimple still perfectly interrupting the line of her face. So I scooped out a bite, made sure it was cool enough to eat and brought the fork to her mouth. She immediately winced, shook her head and made an ungodly noise. FINE. Her sister gets the island. I’m keeping the planet for me and my lesbian sister wives.

“At’s not a potato,” she explained.

I was about to ask her to elaborate on her knowledge of root vegetables when she said, “I want the red potato.”

“This is the only kind of potato we have,” I explained. “This WHITE kind. This. This is a potato.“

You guys, I am not being racist against potatoes. Don’t even go there.

She shook her head again and repeated, “The red potato.”

I slowly took a bite of my lunch, set down my fork and then shrugged. “I do not know this red potato of which you speak.”

As I turned to continue eating she disappeared into the kitchen. I heard her drag the foot stool across the room, some commotion near the cabinet where I keep her bowls and a whole bunch of wrangling around on the countertop. Thank god I don’t keep a full set of knives right there! HOO! Nope! Those knives are waaaaay up on the top shelf in the pantry! Well, NOW they are!

“I got one! In a bowl! A red potato in a bowl!” she squealed as she hopped off the stool and came running to my side. I turned my head to see her holding a bowl. With a tomato inside of it.

“WOOK! A RED POTATO!” she screamed.

She blinked again. I dramatically raised my eyebrows, I guess because I thought it might prompt her to respond? Surely someone who thinks a tomato is a potato is going to catch on to that kind of cue.

She waited several seconds before she leaned in and whispered really slowly, “It’s a red potato.”

Who is selling ponies?