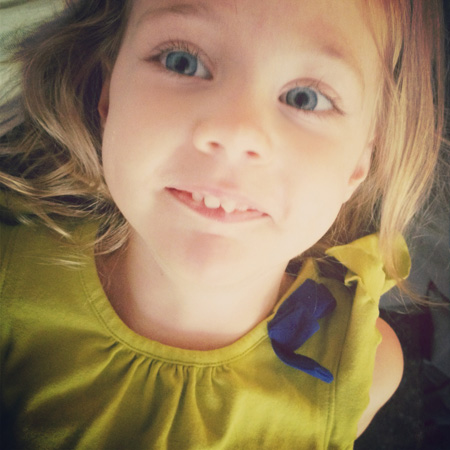 Friday afternoon during lunch I poured Marlo a bowl of shredded parmesan cheese to snack on after she had finished a bowl of noodles which she always asks for in this manner: “Noodles! In a bowl! Not too hot! Don’t stir it!” If you ever have to serve her table at a restaurant you’re going to want to pee in her soup.

Within a few minutes she started performing a fun new trick she picked up from what I can only assume was a stray animal and began chewing up the cheese and then spitting it out. Parmesan cheese already smells like dirty feet, it’s not like you need to regurgitate it to make my lunch time extra special, but thank you for being so thoughtful, Marlo. Only thing you forgot was the follow-up burp. Here, wipe your mouth on my shirt.

I told her to stop and when she refused to do so I removed the bowl from her reach. There were several shreds of cheese sitting on the table in front of her, and she started flicking them to demonstrate that she was not happy. I told her to stop doing that as well, and that’s when she yelled, “NO! I WILL NOT STOP!” I won’t lie, a part of me wanted to flick her smack on the nose and tell her that now she understood how the cheese feels except the cheese would live to see its fourth birthday.

Instead I pulled her out of her chair and set her down next to the post you can see behind her in this photo. I had every intention of walking her over to her time out spot, but I had a mouthful of salad I wanted to finish swallowing. In those five milliseconds a synapse cracked in her brain and she lost her mind, first by trying to claw her face off, then by shaking her head as if an evil spirit was taking over her body and it got into a fight with the three other personalities who live there.

Then she turned around to face the post. And I guess because it was the closest thing to her, she put her mouth on one of the 90-degree corners AND TRIED TO BITE IT. WHILE SNARLING.

My child tried to take a bite out of the wall.

Oh, really? I’m going to take away her cheese? Well then she was going to fill her mouth with a wad of dry wall! PWNED!

No time out needed after that because she was stuck with the bitter taste of the wall in her mouth for several minutes. And so from now on whenever she’s engaged in bad behavior, I’m going to point to the nearest wall, cock my head and say, “You want to chew on the plaster from that one? Didn’t think so.”