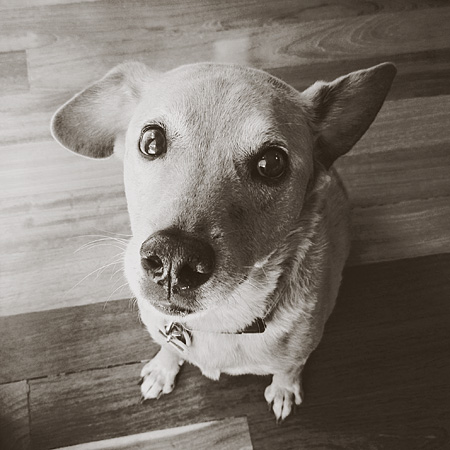 One night last week I turned over in bed only to come face to face with Chuck’s cold, wet nose. If you think I’m dramatic when I’m awake, you should come see what happens when I have a bad dream or, you know, wake up to find an animal staring me in the face. If Leta wants to get in bed with me at night she’s learned not to wake me up because my sudden, involuntary reaction will scare her even more than the nightmare she just had about a ten-foot-tall tarantula trying to climb into her mouth.

My first thought upon learning that Chuck was in bed with me (after I leapt three feet into the air and sang an opera of obscenities) was, AWWWWW! Puppers wants to snuggle! Because Chuck does not ever sleep in my bed. Ever… wait. Scratch that. Yes, he does. Chuck sleeps in my bed when I am not in it. During the day that’s where he prefers to nap, but if I walk into the room and pretend that I’m going to sit on the mattress, he will roll his eyes and then slowly get up and sulk away like, great. You just HAD to come in here and shit on my good time.

The second thought I had was, OH NO. What’s wrong? Is he sick? Is he sensing an earthquake? Can he tell that the Second Coming is about to happen? Because for Chuck to be sleeping in my bed when I am in it? For him to CHOOSE to be next to me in bed? If Chuck had a list of Awful Things In Life and the items on that list started from least awful to most awful, the last three things would look like this:

– DEATH
– SLEEPING NEXT TO HEATHER
– PEOPLE WHO DO NOT APPRECIATE MORRISSEY

Something had to be horribly wrong in order for him to go, you know what? I’d rather be in bed next to that vile human. Let’s do this.

I figured that if it was especially grave that it would make its presence known rather quickly. Like, Jesus Christ would suddenly appear and I’d burst into flames because I haven’t paid my tithing in, what? 15 years? I am pure kindling when the Mormons prove they’ve been right all along.

If he was sensing an earthquake, well, there wasn’t a hell of a lot I could do about it from my bed in the middle of the night. Except scream. And last I checked, screaming has a bad track record of keeping the roof from caving in. Doesn’t mean I won’t try it in the event of an actual disaster.

So I went back to sleep and figured I’d see how he was behaving the next morning. And, you guys, he was weird. He would not leave my side. In fact, he made sure that his body was pressed to my leg when I got Marlo out of bed and headed downstairs. And then he wouldn’t eat. And then he wouldn’t go outside. If you’re a dog owner you know that this type of behavior is a giant red flag. He’s either really sick or something catastrophic is about to happen. Like, Michele-Bachmann-getting-elected-president level of catastrophic.

And then I heard it… a piercing chirp coming from a smoke alarm somewhere in the house. Just a single chirp every 45 seconds or so. Chirp… chirp… chirp… and every time it happened Chuck would wince like the chirp was smacking him in the face. After going through every room in the house I realized it was coming from one of the three malfunctioning alarms I had disconnected from my room, Leta’s room, and Marlo’s room, alarms I had placed at the back of a shelf behind a bin of cleaning supplies in the pantry. Obviously it was chirping in Morse code about its raging distaste for Bona Drag.

So I got rid of those smoke alarms, and within about thirty minutes Chuck was acting totally normal. He ate treats and ran around the backyard. He walked out of the room when I walked into it. Just like that. Problem solved. Except, I got to snuggle with my dog for a night! And now it isn’t going to happen again, at least not until The Great and Dreadful Day of the Lord!

So you can go ahead and think that I’m an terrible person for recording the sound of that malfunctioning chirp on my iPhone, and I’ll just go ahead and correct you. I am a selfish person who’d be willing to torture her dog into a night of snuggling in bed.