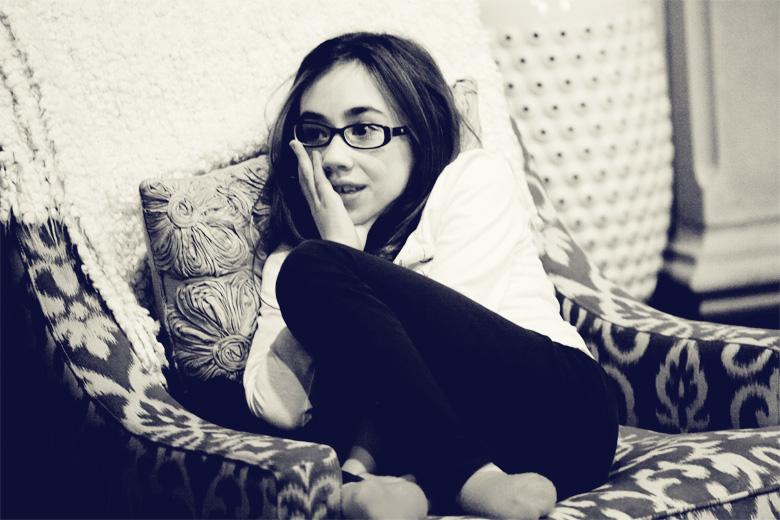 One afternoon during Leta’s second grade year at school she brought home a special certificate decorated with her school’s mascot. It was a reward for having committed an act of kindness, and when I asked her how she had earned it she shrugged her shoulders like seven-year-olds do when they are focused on the cartoon they want to watch after a long day at school and not on anything coming out of your mouth.

The key to get your kid to pay attention is to talk to them only when your mouth is full of chocolate.

The following day when I walked her into school I pulled her teacher aside and asked her if she could explain. Apparently Leta was standing in line with her class along the hallway to the cafeteria when some older kids walked by and started picking on someone who was short for her age. Leta immediately stepped in and told them to stop, that what they were doing wasn’t right, and then she guided her classmate away from the scene. One of the lunch aids witnessed the whole thing and informed Leta’s teacher.

I had to resist dancing like Elaine Benes right there in that classroom.

Pride doesn’t even begin to describe what I felt, but the emotions I have about her generosity are so much more intricate than that. Yes, we have been very diligent about teaching both girls to treat everyone with respect (one of the kids is having difficulty with this skill but I won’t name names MARLO), but Leta has always been very sensitive and in tune with other people’s sensitivities. When Marlo gets upset, Leta feels it in her own body, and not just because Marlo likes to swing her limbs in the direction of other people. She took up for her classmate because she knew it was the right thing to do, but I’m sure part of her motivation was because she could physically feel the other girl’s pain.

That’s a very special attribute to possess in a personality, and one of the many beautiful things about my daughter. People who know Leta have told me that they sensed this about her the first time they met her. Her gentleness is as present as her skin.

But it’s also quite scary. In kindergarten and first grade, kids sometimes say mean things because they don’t yet have a filter in place. They don’t know they’re being mean. They understand what it means to be hurt, but they don’t know that they may be inflicting pain. That’s why we don’t round all of them up and bus them to prison even though we really, really want to.

And then something terrible happens. Filters develop but so does the capacity and the desire to hurt. Kids start to say mean things because they want a reaction, maybe out of a need to feel powerful, maybe out of an insecurity, maybe because they are mimicking the behavior of the adults in their life. Maybe they once saw a comment thread on YouTube and thought, “Hey! I want to try that.”

When I was in fifth grade my dominant Hamilton genes had prevented me from developing at a rate similar to every other girl in my class, and after being teased relentlessly for my lack of curves I begged my mother to get me a padded bra. Sadly, there did not exist in 1985 the technology that we have today in terms of curve enhancement. If you wore a padded bra you looked like you were wearing a padded bra, except the one my mother bought me made it look like I was stuffing my bra. I don’t know what those kids were thinking as they pelted me with wadded up tissues one afternoon as I walked from the back of the bus to get off at my stop, why they needed me to feel so terrible about myself, but it worked.

I wonder what they would have said if I had asked them: “What are you thinking? Why are you doing this?” If they had been forced to analyze the emotion behind the desire to hurt me, would it have made them hesitate to do something similar in the future? Or were they too young for that kind of self-exploration?

I thought of that incident when Leta came home a couple of months ago visibly upset because someone had made fun of her glasses. I hugged her, told her I was sorry that this had happened, and instead of telling her to ignore the whole thing, instead of just writing it off as “sometimes people are mean,” I asked her why she thought that kid had done this. She kept shaking her head and saying she didn’t know why, she didn’t understand, a lot of kids at school have glasses but the girl hadn’t made fun of theirs. So I tried to explain that it had nothing to do with Leta or her glasses. It had everything to do with something going on in that kid’s life, and she took it out on Leta. She is still trying to figure herself out, I told her. And in her confusion, she tried to hurt her.

“Trying to figure herself out?” she asked.

“Well, just like you learn how to add and subtract and multiply numbers,” I said, “there are a lot of things to learn about yourself, especially as you get older.”

“I don’t get what you’re trying to say.”

“But that’s not fair to me!” she pointed out like the lawyer she will one day be.

“No, it’s not. And if this is what happened, she probably felt good for a little bit, but it didn’t fix her problem. In fact, she probably went right back to feeling bad. Hopefully she learns that being mean to you wasn’t the answer. Hopefully she’s figuring that out.”

She finally nodded and I told her she did a good thing by not bopping her right on the head.

Her life will be filled with these encounters (if my own is any indication), and when the inevitable happens, when someone tries to hurt her again and succeeds, this will always be the discussion I want to have with her. I won’t ever tell her to just get over it, I won’t ever wave my hand and tell her that she needs to choose not to be hurt because that is probably the most ridiculous thing you could say to someone as sensitive as she is. But if she can explore why and where someone has to be to act in unkind ways, that it has absolutely nothing to do with her, then that process can help her move forward. I happen to know that it works.

This post brought to you by Secret Mean Stinks. Gang Up for Good here.