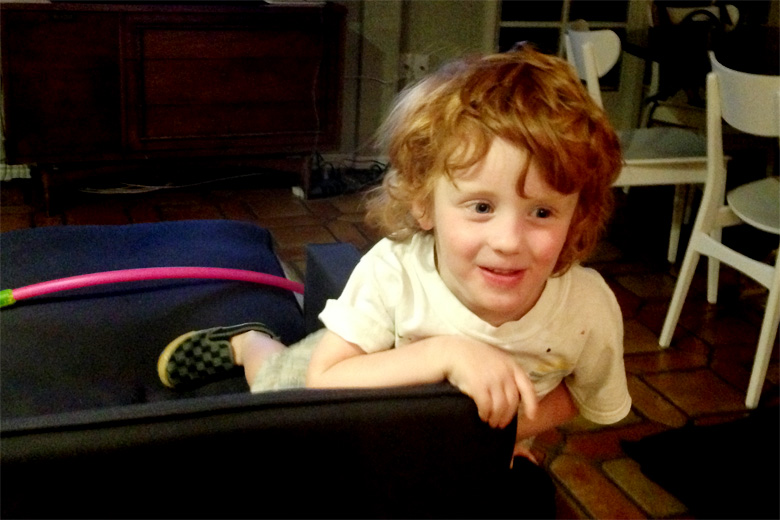 Last Thursday afternoon I got a text from my friend Stacia asking if I could watch her younger son Beck for a few hours that night. She had an emergency, and this was one of those instances when I was so happy that I could serve someone else, and no, I’m not about to go all Mormon on you. Unless you need me to. Do you need a potato casserole? A priesthood blessing? A rousing, operatic rendition of “The Spirit of God Like a Fire is Burning”?

If you were in primary and didn’t jump out of your seat when you got to the, “We’ll sing and we’ll SHOUT!” part then you need to reexamine your testimony, Terry.

I know, I know. I said SERVE. It has such religious connotations for me, but it’s true what they say. Nothing is better for your well being than getting out of your own shit and helping someone or something else. And in that sense, maybe I was being selfish. I needed to get out of my shit. So when she texted I was like BRING HIM OVER. I don’t get to serve as much as I should, and maybe that’s he part of the puzzle that’s missing from my overall happiness. NOTE: this is not an invitation for you to tell me that it’s Jesus who is missing. Jesus is not missing. In fact, he’s very busy being the lead singer of a moderately successful rock band.

My mother had taken both of my kids on a road trip down south, so it was just me and Beck. Yeah. A boy. A species I know nothing about raising. So when she dropped him off I was like, um, so… video games? Dirt? Sticks? ROCKS. I’ll give him rocks! We can blow shit up! And I will dress him in something blue while we’re doing it.

She shrugged and said anything would do. How easy does SHE have it? If I were to drop Leta off at someone’s house I’d be like, “Well, we brought ten library books. If she finishes them before I return and you have nothing else for her to read you’ll all probably die.”

And then for a good hour he just ran laps outside with the dogs, back inside through the hallway and then again into the backyard. Around and around. Finally he stopped, blinked those unearthly blue eyes and said, “Heather, I’m hungry.”

So, here’s the thing: where I come from, children do not address adults by their first names. Never. It’s an unspoken rule. I am Ms. Armstrong. Stacia is Ms. Sidlow. Jesus is Mr. Christ. And when I first moved here and noticed this happening I got all Southern self righteous about it. Like, how dare that child not understand the life and the years I have lived beyond him? He just called me Heather as if I haven’t graduated college, lost a loved one, plowed those fields, and birthed a child in a pasture by myself with nothing but a bucket of water and a spoon. The nerve.

I bought into the idea that forcing children to address adults as Sir and Ma’am was the primary way to reinforce the idea of respect. And maybe on some level it works. Maybe I should buy into it. But I’ve witnessed so many children here who have not grown up with that cultural construct who are just as respectful and lovely to adults as those who are raised in the South. And they address me as, “Heather.” It’s an aspect of living in Utah that I have come to embrace. That and the abundance of Subarus, people who wear camping sandals when they aren’t camping, family decals on the back windows of cars that consist of over 14 figures, and kids named Bracken.

So I asked him what he’d like to eat while I silently panicked. My kids don’t eat anything, really. So my refrigerator and cupboard are sorely lacking. Would he like some non-flavored air?

He asked if I had any mac and cheese, and oddly there were two boxes of organic mac and cheese at the back of the pantry. I showed it to him and he said, “I’ve never had that kind but I’ll try it.”

He didn’t flinch, fall to the floor and gag himself into a coma?

(I know it’s a personality difference, not a gender difference, YOU WHO ARE ITCHY TO SERVE UP A LECTURE.)

AND THEN GET THIS. That kid had four bowls of mac and cheese that I had cooked on the stove. FOUR GODDAMN BOWLS. He’d finish one, dig out every single piece of pasta and then ask, “Heather, can I have another bowl, please?” Can you have another bowl? I think I might have just discovered why you cooking people like to cook. Because at that moment I wanted absolutely nothing other than to search out a recipe for country fried steak, gravy, biscuits and okra. Cook it all up and just stand there and stare at him while he ate it. Take notes on which dish he liked best and then adjust the recipe.

I wanted to send him home forty pounds heavier.

Why yes, Beck. You can have another bowl. And then I’m going to give you a gallon of ice cream as a reward for, one, getting me out of my own shit for a few hours, and two, allowing me to experience the joy of watching a child eat multiple servings of something that I cooked without me having to dangle his favorite Barbie over the toilet.