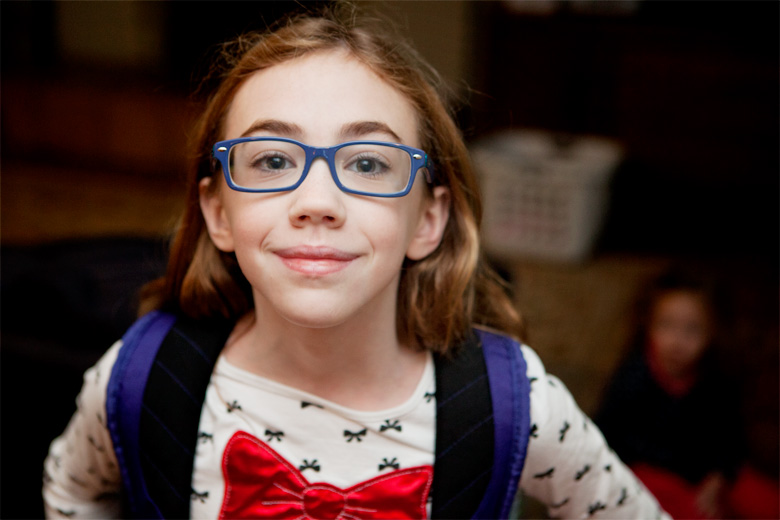 Recently Leta has been asking to leave a little earlier for school in the morning, and the second time it happened I resisted every urge to interrogate her:

You have to understand. This is a kid who from kindergarten through third grade would sit inside the car and wait for the bell to ring. Only then would she reach to open the door. She hated showing up early because that meant sitting in the car and the car was so boring and because I have such raging envy for anyone who has the time to be bored I’d sit there in the front seat and go, okay, fine, for the next ten minutes I’m going to talk about my butt.

Now she has the door open before I’ve even stopped the car. She’s up and out, smiling, swinging her backpack over her shoulder and saying goodbye to me and Marlo as fast as she can. Even if the bell doesn’t ring for another twenty minutes. It’s bittersweet, this development, because it means she’s more confident and is quite fundamentally enjoying her life. But I don’t get to talk about my butt anymore.

I am already an Obsessive Earlier, a term I just made up for those of us who think that showing up on time to something means we’re late. I can’t be alone. I can’t be the only one. Please tell me that there is someone else out there who shows up EVERYWHERE at least ten to fifteen minutes early just in case. Just in case of what? Oh, let’s see. Nuclear war. Famine. Rolling blackouts. Rising sea levels. Icebergs.

Also, I just really don’t want to be a late person. It’s pretty much the same thing as being a murderer. Yes, I’m capable of stringing together horrifying obscenities on the Internet and sometimes (often) in front of my children, and I’ll be the first to tell you that I never drive the speed limit. Those are character flaws I can live with. If you are a perpetually late person I’m sure that you have many other lovely qualities and are probably a far better parent and citizen than I am. But you and I CANNOT EVER take the same car to an event. And if you are somehow tasked with driving me to the airport, I’m sorry, but I’ll have to shoot you.

I already get Leta to school pretty early. Obsessively early. And here she was asking me to get her there even earlier. So I was finally like, dude, what is going on, and I asked it in the most non-threatening way I knew how just in case she really was involved in something she wanted to keep hidden from me. I know, she’s only nine, but you have to establish that trust early. So that when she does up and join the College Republicans you find out from her and not from her virgin boyfriend Clifton.

“Oh!” she said, suddenly very excited that I had asked. “The breakfast!”

“Yeah. If you get there early enough they have this breakfast that you can eat. I LOVE the hash browns!”

“Wait,” I said, totally confused and not just about the fact that she was excited about food. “Are you paying for this breakfast?”

Oh ho ho ho ho. A free breakfast. At school. Yes, the entire Internet has been flipped on its head in the last few years, but that does not mean that I am in an income bracket where my child qualifies for a free meal, and oh holy shit, what is the angry letter from school going to say to me about this?

Hey, hardworking taxpayers! Thanks for getting my kid to eat! You’re awesome!

Except, I guess the breakfast really is free for every child regardless of household income. I should probably phrase that as a question because I haven’t received the angry letter or a bill from school yet. Yes, I know, I could just ask someone at her school, but I’m too busy being early to remember to stop my car and ask someone the damn question. I did google it, and although I didn’t find anything official I did find a blog post by a conservative Utahn who is suuuuper upset about the whole thing and says that THIS RIGHT HERE, this free breakfast, this FOOD is indoctrinating our kids and teaching kindergartners to take someone else’s money. I hope she does an angry search for UTAH SCHOOL FREE BREAKFAST and finds out that my nine-year-old hooligan is, every morning, raiding her purse.