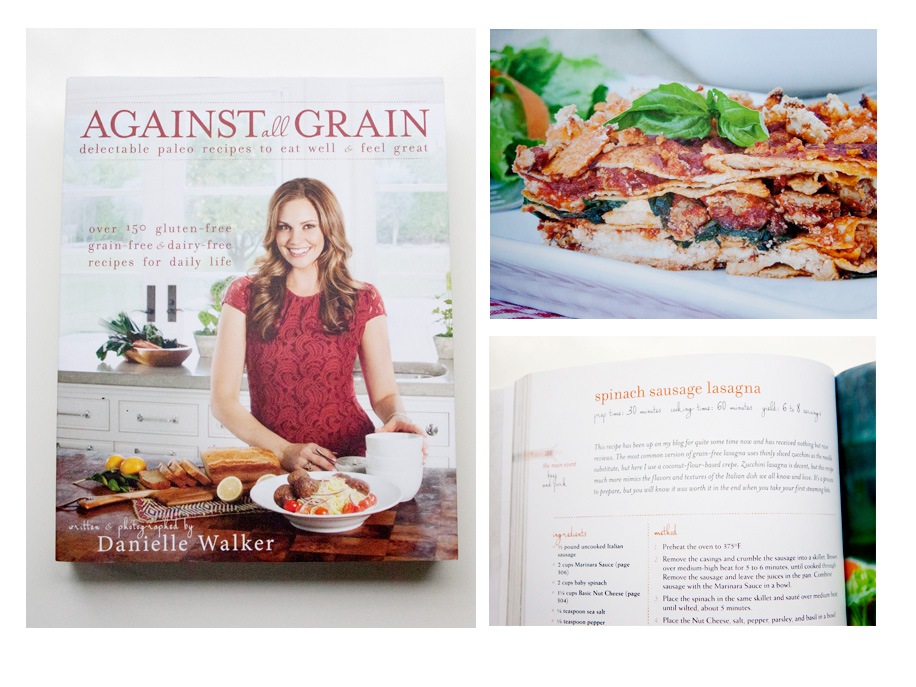 It may seem ironic for me to feature a cookbook because I am not known for my culinary skills or prowess in the kitchen. But last week during a late lunch with Dane and Tyrant I realized that I’m stifling an urge to become fanatical about the Paleo diet. Do not worry, I’m not going to turn into one of those people. I’m not going to go door to door with a caveman puppet and a pamphlet detailing how to carve the marrow out of the thigh bone of the antelope you ran down and strangled with your own hands. But wouldn’t that make a great story? You’d be like YOU ARE NOT GOING TO BELIEVE WHAT SHOWED UP AT MY HOUSE TODAY. Because my hair would be in dreadlocks and I’d be wearing a skirt woven out of the pelt of a goat.

I’ve been eating this way for two and a half years, and it has been nothing short of life-changing. So many ailments that I suffered and just chalked up to being human are gone: bloating, sinus infections, constipation, frequent colds, chronic fatigue. I no longer walk around ravenously hungry all day long. Sure, this diet may not work for you, but if I can bring attention to it and that attention helps someone who wants to make a change in the way they approach food then I don’t need to wrangle that goat and shave its coat for my wardrobe.

is a fantastic resource for anyone who wants to make this kind of adjustment to their life. In 2007 author Danielle Walker was diagnosed with ulcerative colitis, a type of inflammatory bowel disease, and after months of suffering and a near death experience, she was put on a harsh regimen of drugs that only exacerbated her condition. Two years later she tried a grain-free diet and saw such vast improvements to her health that she eventually transitioned to the Paleo way of eating. She hasn’t seen a flare-up of her diagnosis since the summer of 2011.

DING DONG. KNOCK KNOCK. PALEO FANATIC AT YOUR DOOR. Hi, my name is Heather, and I’d like to bear my testimony. Sinus infections CAN SUCK IT.

She details all the ingredients in her pantry, the equipment she uses in the kitchen, what types of foods to avoid, and then metes out the recipes into sections like “small bites,” “the main event” and “sweets and treats.” She also includes resources, menu suggestions, and several success stories from fans who’ve tried out her creations, all in a very relaxed, clean and beautiful layout that is in no way preachy or evangelical.

So. Nudge nudge. Here is a another wonderful resource for you if you are interested in making some changes. In the name of the Hunter Gatherer, amen.