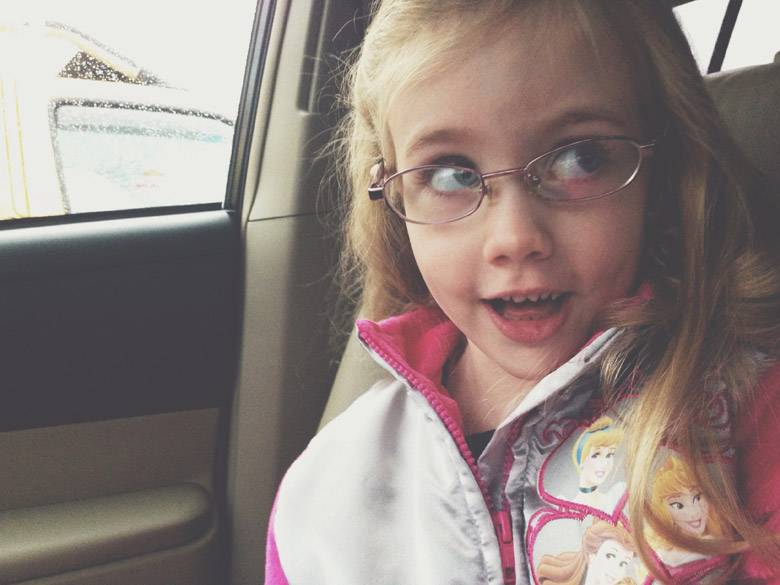 Last week I attended parent-teacher conferences for Marlo at her preschool and it was pretty much what you expect for preschool. You’re not there to discuss how well she completed her homework or how well she’s memorizing multiplication tables. You’re there to find out how much you owe the school because of property damage.

I know that her teacher thinks Marlo is a lovely child HOW COULD SHE NOT, and she had nothing but fantastic things to say about her. She’s adjusting to new routines, cleans up after herself without having to be prompted to do so, can create patterns with three different colors, and has several friends in class. She actually went on and on about what a pleasure she is, her easy going nature, the way she tries to include everyone when playing. I explained that before I drop her off in the morning I turn her DEMON switch to off.

Then she finally paused and a wry smile crawled across her face.

“You know how much we love Marlo’s stories,” she said and I was like OH MY GOD WHAT DID SHE SAY THIS TIME.

“Yeah…” I nodded. “I hope no one is scarred by the one about the hand.”

“Oh, everything is fine!” she assured me. “She’s got such an imagination, and the detail she goes into is really amazing for a kid her age. Yesterday she was talking about the baby boy who lives in her house.”

“Right. So… what we’re doing here with her is emphasizing which stories are ‘real’ and which are ‘pretend.’ And she’s catching on. Mostly.”

Essentially: your child is a delight and wonderful to be around except she’s an outright liar.

She suggested that I do the same at home with Marlo, have her admit when she’s making something up, and then perhaps illustrate some of her stories. But it’s a little more complicated than that. Because some of the stories she tells are true, they just aren’t hers. Anytime Leta talks about anything Marlo immediately adopts it as her own. Yesterday Leta talked about doing jumping jacks during PE. And so during dinner Marlo told me that she had done jumping jacks during PE. She stole Leta’s story. A liar and a stealer. But a delightful one!

“Marlo, do you even know what a jumping jack is?” I asked, already veering from what the teacher told me to do. I’m supposed to emphasize “pretend,” not try to trap her in the lie WHAT CAN I SAY IT IS JUST SO TEMPTING AND FUN.

“Yesth!” she responded and then she took another bite of her food.

“Convenient that you did not elaborate. What is a jumping jack?”

She set down her fork so that she could place both elbows on the table and shake her hands at me as she said, “THAT THING.” As if she was soooo tired of having to remind me to pay attention.

“Show me what a jumping jack is,” I said.

I suppose she stole eye-rolling from her sister as well because she did that four or five times before she climbed down from the table, sprawled herself face-first on the ground and started writhing. Not so much a jumping jack as a really good interpretation of an exorcism.

There are endless ways you can bond with your child — while reading books together, at the park, through music — but by far my favorite way to bond with Leta is giggling uncontrollably at the Marlo Show together.