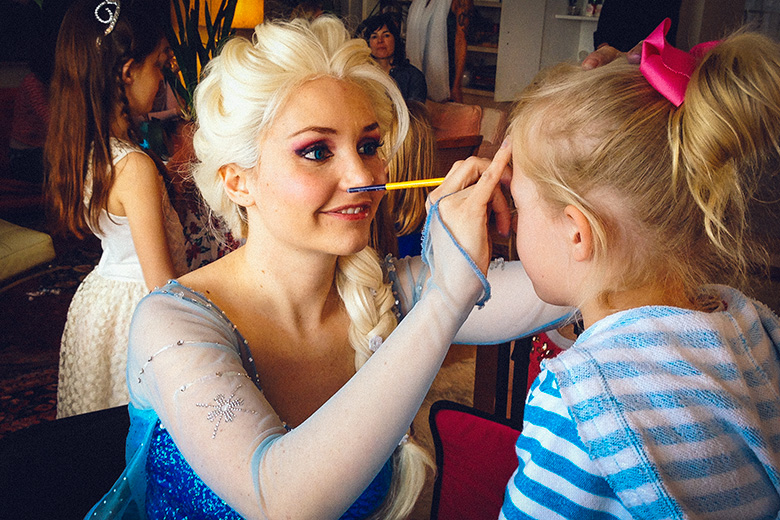 On Saturday afternoon after dropping Leta off at her friend’s birthday party I drove Marlo up to a birthday party as well, one thrown by my friend Rachel for her daughter Georgia. Marlo isn’t close friends with Georgia, but does that really matter when Queen Elsa would be in attendance? Did that just make you shudder? Elsa. Ellllssssaaaaaaa. From now on no one is allowed to say that name out loud unless their hand is inside the puppet of a snake with googly eyes and they are using an exaggerated lisp.

I’m going to take pity on you and refrain from linking to anything that has to do with the movie Frozen. Except for this. Because this will not ever stop being funny:

If that makes no sense to you because you are insulated from the TOTAL CONSUMING MADNESS that is this movie, go here.

Whoever wrote that movie and those songs had to have made some sort of deal with the devil because I know of six-month-old babies who instantly perk up and start singing the words when they hear anything from that soundtrack. This movie hit kids and spread like the plague, and I bet your child has attended one if not several Frozen-themed birthday parties in the last few months. And they loved every minute of it, right? They did and you indulged them and we, you and I, we deserve a cookie for not flinging whatever device they are using to watch that movie ONE MORE DAMN TIME out a two-story window, shrugging our shoulders and calmly explaining, “She did just tell me to let it go.”

Rachel found a local woman who looks remarkably like ELLLTHHHSSSSAAAAA (think: snake with googly eyes) to show up in costume and wow the kids. And did she. She talked and interacted with them as the character would, and then she sang “the song” in her own voice as perfectly as if it had been written for her. We showed up just as she turned the backing music on, and after picking her jaw up off the floor Marlo clutched my arm, pulled me to her face and shout-whispered, “I TOLD YOU SHE WAS REAL.”

That morning she and asked me for the hundredth time, “Is it going to be a real Elsa or a fake one?”

I had to consider my answer very carefully. “Well, it’s not going to be a cartoon.”

“I don’t know, Marlo!” I answered trying to build the excitement.

Leta was sitting a few feet away with her head in a book when she looked up. “Is an actual person showing up?”

“Yeah,” I mumbled, and then I mouthed these words while miming them: “A PERSON DRESSED AS ELSA.”

“Mom,” Leta said with the tone you would address a woman who has come out of the bathroom with toilet paper hanging out of the top of her pantyhose. “You do realize that she could have seen you.”

You want to know why I love age ten so much? Because Leta then mouthed and mimed back to me, “YES. WE DO. IT IS A PERSON DRESSED AS ELSA.”

Turns out that was real enough. Because usually in these situations when Marlo doesn’t know anyone very well, she’s my shadow and clings to my leg the entire time. Saturday afternoon I barely saw her for over three hours and had to physically drag her away from that party. This woman not only looked like Elsa, she could sing and be cordial with kids AND she could paint faces like no one’s business.

I pulled Rachel aside halfway through and joked that this woman had to be Mormon because God had given her an unfair share of talent. She can sing! She can dance! She can speak 14 languages! She can crochet top hats for orphaned mice! WHAT CAN SHE NOT DO?