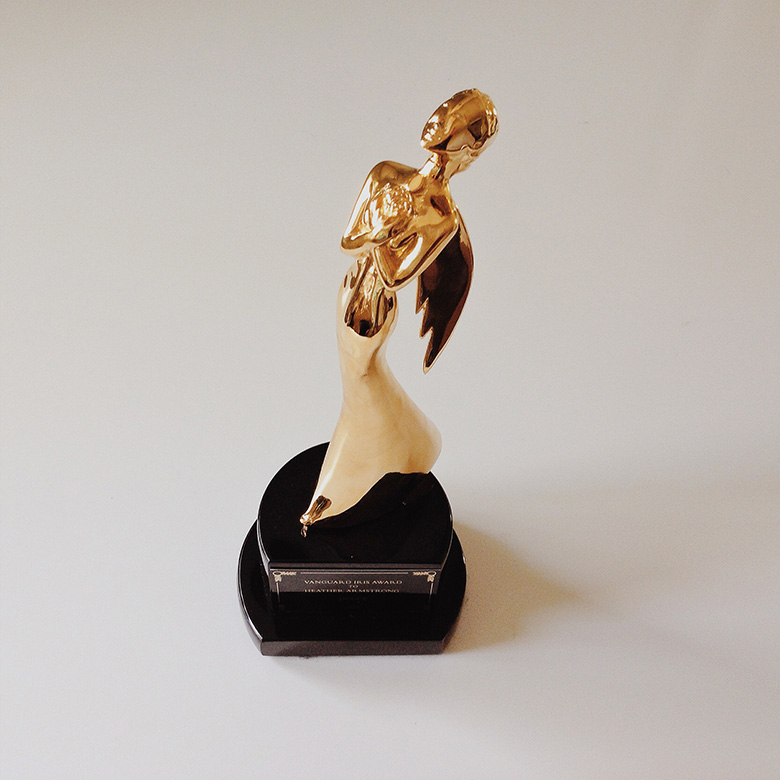 Last Friday afternoon I sat with my good friend Kristen Howerton on a keynote panel at the Mom 2.0 Summit that we thought was going to center around how we as bloggers who have built platforms can use them to bring attention to domestic and global issues even when those issues aren’t at the core of the content that we create. The panel ended up looking somewhat different, but the idea of discussing that subject matter had drawn me to Atlanta. I had initially booked my return ticket for Saturday morning because my mother was watching the girls, but the event organizer Laura Mayes, another good friend of mine, asked if I’d extend my stay so that I could present three Iris Awards:

The Iris Awards honors the parent blogging community and its body of work throughout the year. The Awards recognize the finest expressions in art, commentary, commerce, philanthropy, ideas and connections, all the while celebrating the emerging industry created by its pioneers and leaders.

I attended a rehearsal Saturday afternoon at the Buckhead Theater and witnessed firsthand the amount of work and love that Laura and her partner Carrie Pacini had put into organizing this event. It was staggering in detail, even if I did poke fun at the copy (sorry, Laura!) that had been written for me and my very, very, very tall co-presenter Ryan Hamilton. It’s just, there is a reason I am not an actor who delivers someone else’s words. I know my skills and that is definitely not one of them. So you’re probably wondering why she’d invite me to present these awards. Well, obviously she hoped I’d disregard the script and break into a song about my butt.

Ryan is 6’6″ and I was going to be wearing heels putting me roughly at 6’3″, so most of the rehearsal was occupied with trying to position the teleprompters so that we could both see them. He happens to be a people pleaser like myself and we were like, listen, we can just hunch over like a troll, it’s not a big deal, look, LOOK AT US HUNCH. Then he and I got into a hunch-off and I was like, Ryan, I can people please in my sleep. YOU WILL NEVER OUT HUNCH ME.

One of the technicians worked their magic so that everyone, short and tall, could read the monitors, but not before one of them said to me, “We’ll fix this. We just didn’t expect you to be so much larger than the others.”

I’m going to change my bio for everything now and it’s going to begin with, “You will not even believe how large I am.”

Cut to that evening after everyone had dined on a few cocktails and posed for photos. All the nominees had assigned seating at the front of the room, and since I was on the ballot for the work I’ve done with Every Mother Counts, I sat down on the front row where my name was taped to a chair. I was running through the script for my segment of the ceremony when Laura and Carrie took the stage. After we all applauded their presence they began:

Carrie: A forerunner. A ground breaker. A Vanguard.

Laura: We want to begin the first Iris Award ceremony with the Iris Vanguard Award. The is an honorary Iris Award for pioneering spirit and outstanding contributions to the world of parent blogging.

Carrie: The word pioneer is used so often that you forget that it comes at a price and requires rare measures of courage, creativity and dedication….

Laura: Our first Iris Vanguard recipient exemplifies these things, along with a little disregard for the establishment

About halfway through that Laura shot lasers out of her eyes at me and grimaced. At first I thought she was flirting with me, and while Laura is quite dashing and magnificent and everything I would want in a sister wife, I kind of like penises.

And then it suddenly hit me: whaaaa-haaaaaaat? WHAT? Ha. Hahahaha. Ha. Ha. Haaaaaa.

I shook my head back at her and she did it again. Lasers beamed out of her eyes and burned a hole in my dress which she will kindly stitch back up once we are on the compound and I’m in charge of watching all the offspring. The room started to spin a bit and then I actually remember thinking OH WAIT SHE HAS NO INTEREST IN THE SONG ABOUT MY BUTT WHATSOEVER.

Carrie: We would like to now present, fittingly, the first Iris Award… the Iris Vanguard Award… to Heather Armstrong.

I think I mimed to both of them something about having to take the stage? Do I? Have to walk? How? Did this happen? They both nodded furiously and I do not remember how I got up and walked on that stage, but there I was standing next to them, bawling, totally earnest and embarrassing tears staining my cheeks, tears that will surely be mocked because it’s just a damn award that no one has ever heard of. But it was a totally spontaneous, gut, unfiltered reaction. And then I had an Iris award in my hand. They then led me over to the podium where I guess I made an acceptance speech, but I can’t remember any of it. It was probably totally incoherent and head-scratching. Well, that’s not entirely true. I do remember one part. Very early on I dropped the adjective “motherfucking” and if I offended anyone in the audience then I definitely should have followed it up with “suck it.”

I was so surprised, so sideswiped by this honor that I had not prepared anything to say. Which is why I am writing this post, now that I have had some distance and time to gather my thoughts. I could have gotten up there and read a list of all the people who have been an integral part in making my website so successful: friends, colleagues, agents, coders, lawyers, assistants, editors, publicists, ad networks, and accountants. The list is long and robust and filled with talent that I have tried to absorb through association. I could have dedicated it to my readers and community without whom I am just a bunch of crazy ramblings in some remote corner of the Internet. My audience is trusted family, and without them (you) I would not have the privilege of working on this website. Thank you.

This stage of parenting with Leta is so incredibly different from anything that has come before it. Instead of just attending to her needs I am actively teaching her about her own humanity. I’m trying to cultivate and empower certain values within her both by example and by sitting side-by-side with her as she navigates what it means to work. I have dedicated myself this past year to her piano practice, to every math problem she brings home, to the hand gestures she uses when delivering an oral presentation. I am actively engaging her in conversations about her friendships, the things that make her happy, the things that frustrate her to tears. I’m investing so much of my own energy into drawing out the contours of her soul.

The most magical thing has happened because of this. Yes, she’s excelling in her schoolwork, and she’s mastered piano pieces that impress judges. She’s learning and figuring out how satisfying it can be to push herself, and it’s so beautiful to watch. But that pales in comparison to the fact that she knows that I care. She knows that we are a team. She knows that whatever obstacle gets in her way, I am there and I will help her get over it together. She knows she can call on me, and I will always be there.

I didn’t think she would notice, you guys.

I’m holding back tears as I write this. I thought she’d resent me and kick and scream and see me come into the room and think UGH MORE WORK I HATE THIS. Instead, this other bewitching thing has happened: it has brought us so much closer together. Instead, our relationship is deeper and more meaningful than it has ever been. She notices and she has pulled me into her embrace because of it. She runs to me. She lingers when we hug. She asks me to stay up a little longer because she wants to tell me more.

I don’t have any idea how long this will last. You parents of teenage daughters have war stories and I’ve listened to them with my jaw on the floor. But you have to understand that even if it stops tomorrow I will have at least had this brief intimacy with her that is at the core of my relationship with my own mother, the person who taught me everything that I know about what it means to be a solid human being.

I am successful because my mother showed me how it is done. She invested herself in me, and I owe her everything. I hope that she knows that I knew what she was doing. I knew that she cared and wanted me to learn how to work, how to be generous, how to be loyal. She is the reason I know how and where inside myself to dig deep. I was paying attention. I recognize the tireless campaigner she was on my behalf.

My bumpy, irreverent parts we will just safely blame on her sister Lola and the fact that I share some of her DNA. (Why yes, I am hungry enough that I could straddle a dead cow and eat a bologna sandwich.)

Mom, you were the one who helped me build that miniature Parthenon. You were the one who made me memorize those speeches about Nathan Hale and Paul Revere and Thomas Paine. You were the one who drove me to and from chorus practice, encouraged me to take AP Physics, attended all the volleyball games, the one who cheered the loudest when I walked across that high school stage having graduated the way that I did. I watched you, I felt you by my side.

As someone who has built a career chronicling parenthood, know that every day I get up and hope that I am giving my daughters just the tiniest glimpse of what you gave me. The whole story of my website is me trying to show you that I was paying attention.