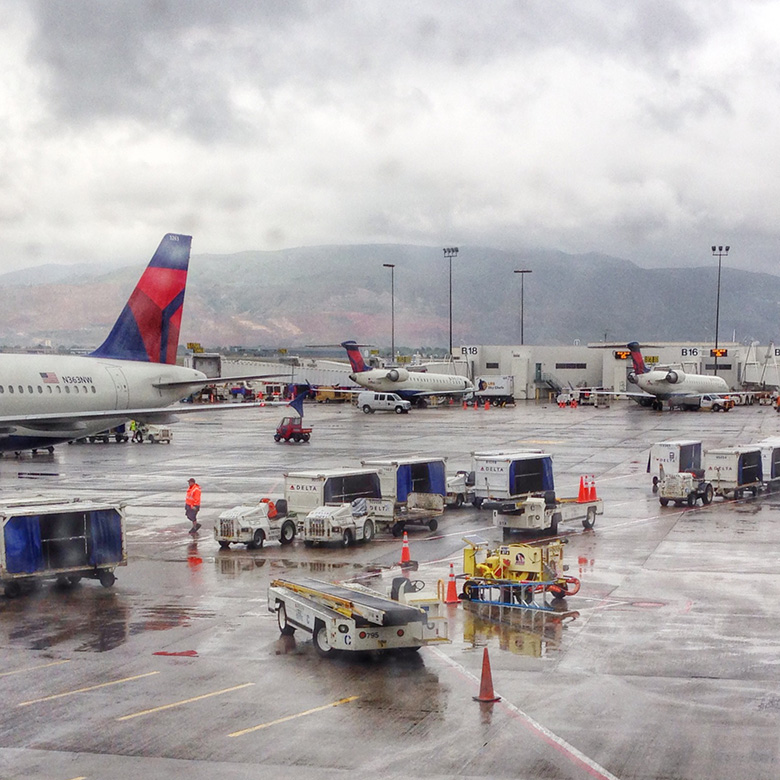 On the Wednesday morning that I left for New York I arrived at the airport only an hour before my flight was scheduled to leave. This is not normal in any way whatsoever. Normal is two hours or more. Three hours is sometimes too late. I’ve mentioned here before that I am chronically early and no where in my life is this more glaring than when I’m traveling by plane. Anything could happen between my house and the airport. Anything. Traffic. Power outages. Car trouble. Measles. Hair loss. Cavities.

To make matters worse, Tyrant routinely offers to drive me and I routinely take him up on this offer. He’s gotten much better over the years and takes the route that I prefer and not the one that winds up through Idaho and back down through Oregon, but there have still been instances when I can sense he’s going to miss a turn or worse, brake unnecessarily at a stop sign, and I’ll have a heart attack right there. He’s far worse for my health than high fructose corn syrup.

The night before that flight a small storm had rolled in and the tail end of it was still lingering over the valley. After I got through security I high-tailed it to my gate because I only had 45 minutes to spare. And in that 45 minutes, in that short walk from security to my gate, the Second Coming of Jesus Christ could occur and while I’d be really happy for all my Mormon friends and family, I’d be justifiably pissed. You choose NOW to come cleanse the earth? Why not wait until I’ve at least boarded!

Along the walk to the gate I realized the airport was far more crowded than usual, people spilling out like Skittles everywhere. Here’s a serious question, and maybe you can help me answer it: what type of person do you have to be to stand at the entrance to the gate three zones before yours is going to be called? Oh wait, I know the answer: an asshole.

If you’re seated in Zone 3 and are standing anywhere near the entrance to that gate when they are pre-boarding those who need extra time or assistance I am legally allowed to walk up to you and poke you directly in the butt. For free. No questions asked. A judge would look at the complaint and go, “It says here you’re an asshole. I would have poked you harder.”

By the time I got to my gate I had heard more than several people talking about a plane getting hit by lightning. Ahem. Clearing my throat for a second because now that I write that I realize HOLY SHIT. LIGHTNING. The thing that comes out of the sky and destroys entire forests with one zap. Just then someone came over the intercom and announced that MY plane, the one that was supposed to be departing in 43 minutes would be delayed temporarily due to some “mechanical issues.”

You know what else can happen between my house and the airport? APPARENTLY LIGHTNING.

That temporary delay very quickly turned into a four-hour rescheduled departure, and when I texted Tyrant to let him know I’d be parking my butt at the airport for awhile he immediately started to do some investigative work. The line to try to rearrange flights at my gate trailed out into the terminal like a wandering vein, so I hopped over a few gates to do some investigative work of my own.

“Hey there,” I said greeting an agent, nary a complaint or whine anywhere near my throat. I used to work for an airline, remember? Agitation will get you nowhere very quickly.

“That flight to NY over there, the one that’s been delayed… you know anything about it?”

He immediately put both hands on his head as he began to shake it.

“Not in the 34 years I’ve been doing this job have I ever seen anything like this!” he shared.

“Was it lightning?” I asked.

“Yes. It was. And they’re saying at least five others.”

“Wait,“ I said holding up my finger. “Six planes got hit by lightning?”

“IN UTAH?” I shot back incredulously. THIS IS UTAH. My kids have no idea what a thunderstorm even sounds like.

“Yeah, crazy, right?” he said. “All as they were landing. Been a weird, wild storm.”

Because I have a bit of mileage under my belt he did me a favor and booked a seat for me on a later flight in case my flight experienced any more major setbacks. I thanked him, and as I was walking to a shop to grab some water Tyrant called to let me know that he’d secured a seat for me on yet another flight because, well, my plane had been struck by lightning. And they weren’t replacing it with another aircraft. They were “inspecting” it back at the hangar.

If you ask me THAT is exactly what the Second Coming of Jesus Christ looks like.

This other flight was leaving soon, so I had to run to another terminal to make sure I boarded on time. I had to shove my way through a crowd of people MOST WHO WERE NOT GOING TO BOARD FOR AT LEAST 100 MORE ZONES, heart-racing, out of breath only for the screen at the gate to suddenly broadcast that it was cancelled. What followed next is certainly the basis for all those scenes in television shows and movies where the character is running through terminals, accidentally knocking people over and awkwardly apologizing, sweat beading on her forehead and upper lip. I racked up over 7,000 steps on my fitbit racing from one cancelled flight to the next, finally ending up at my original flight begging for my seat back. So what if it had been struck by lightning. YOLO, am I right?

Here’s the odd thing: I fly all the time. In both 2011 and 2012 I flew over 60,000 miles. Last year alone I flew over 75,000. I’ve experienced a few delayed flights over the years, but I have not ever had a day like that at the airport. In Utah. Where it routinely snows four feet in less than two hours and pilots can still land the plane with their feet while taking a selfie with one hand and cooking an omelet with the other.

The good news is that the gate agent gave me back my seat, and when we boarded the pilot announced that they had “borrowed” this plane from another route. I think he was lying and chose to announce that bit of news instead of this one: “Holy shit, did everyone see that Donny Osmond is sitting in row 4? No? Well, it doesn’t even matter if this is still the plane that was struck by lightning because now we have the Lord’s blessing!! WOO WOO!”