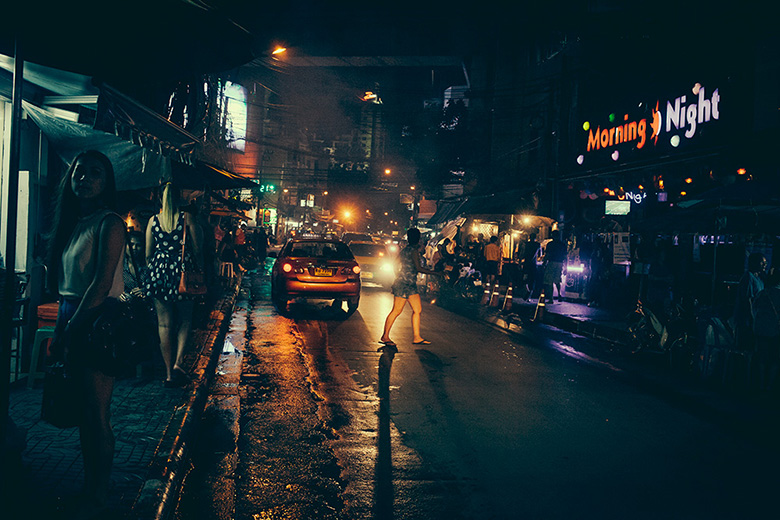 I took this photo the last night I spent in SE Asia on the walk back to a quick debriefing after going undercover again with investigators into brothels to talk with girls in the commercial sex trade (Kristen has written a must-read piece on the difference between sex trafficking and sex tourism and what the Exodus Road focuses on when doing its work, points I will touch on in upcoming posts). I had not taken my camera out on previous nights as doing so can be tricky and compromise the work, but was given the thumbs up to do so that night given that, with certain precautions, it might be beneficial to gather some photos.

It was that night when speaking with one particular worker that the whole substance of the trip circled around and hit me right in the gut. I sort of grasped it while I was sitting there, but it would be another 38 hours before the emotion of it finally hit me with the fullness of its force.

After a 14-hour flight from Hong Kong to Dallas, I showed up to my gate to depart for Salt Lake City only to find out that my flight had been delayed by three hours. Apparently this was happening to several flights scheduled to depart to other cities around the same time, and normally I would have been as upset as the crowd of other passengers sprawling out from the gates into the terminal, all scrambling to find alternate flights or call and reschedule appointments. People were jostling and pushing and turning red in the face from screaming at gate agents whose hands were tied by realities outside of their control.

I slipped off to make several phone calls to my kids and my mother and to respond to a few urgent business-related emails. I hadn’t slept but a few hours on the previous flight and was feeling delirious from the jet lag, physically unable to muster frustration over an extra few hours added to what was already such a long period of travel. When I finally boarded my flight and took my seat, everyone around me was complaining about events they’d missed or had to rearrange because of the hassle of the delay. And I understand that hassle, have experienced it myself and believe they were all entitled to that frustration. Pain is relative, and I nodded at a few of them in recognition.

But when the doors closed and the plane began pushing back from the gate, I looked out the window at the right wing, this miracle of modern technology that would lift me into the sky and take me home to my two little girls and dogs. And I started to cry uncontrollably. I began sobbing, so I grabbed my neck pillow and shoved my face into it so that no one would hear me.

“Ask her what she would be doing if she could be working her dream job,” I had said to the undercover investigator who could speak the language of the 19-yr-old sex worker we had just bought a drink in that dark brothel.

He looked at the ceiling for a second as if gathering the words to ask her the question when in fact he was trying to look for the words to explain something to me.

“See…” he began. “She just won’t understand that. The notion of a dream job is not something that these girls have the luxury of doting on or even considering,” he said. “In fact, if I used the word ‘dream’ she would ask me if I was talking about sleep.”

She had told us a few minutes before that she had traveled here to support her mother and father back home. Working in the commercial sex trade is for most uneducated and poor girls in this part of the world the most lucrative job they will ever know. In many cases there are no other options. They sell their bodies to feed themselves and their families.

“Can you ask her what she would love to do with her life if she didn’t have to work here? Would that make sense?”

He didn’t answer me and instead turned to her with a look of curiosity and began speaking in her native tongue. When he was done, she sat there for a very long time in complete silence. I didn’t know if it was because she had never been asked that question, never been given the chance to consider something else. Then she bit her lip in what I think is a universally spoken way of trying to dam up an emotion you might not want someone else to see.

Her answer was spoken much more softly than anything else in our conversation up to that point, and I could hear her voice trembling. The investigator translated:

“She says she would like to have children of her own and wishes she could have enough money to be there and watch them as they grow. But she knows that won’t happen. That’s why she stays here.”

Earlier in the week I asked one of the investigators if he ever got into these situations and was tempted to take a girl home either to set her free or even temporarily relieve her from one night of barbarity. Did he ever let his professional guard down and experience that kind of response? He shook his head but not to say no.

I know it serves no purpose to ask myself this question or cry uncontrollably at the fact that I had to get up and walk away from that young girl who was gracious and trusting enough to share that little part of her soul with me through a bitten lip, but why was I lucky enough to be born where I could want to have children and afford to be able to watch them grow?