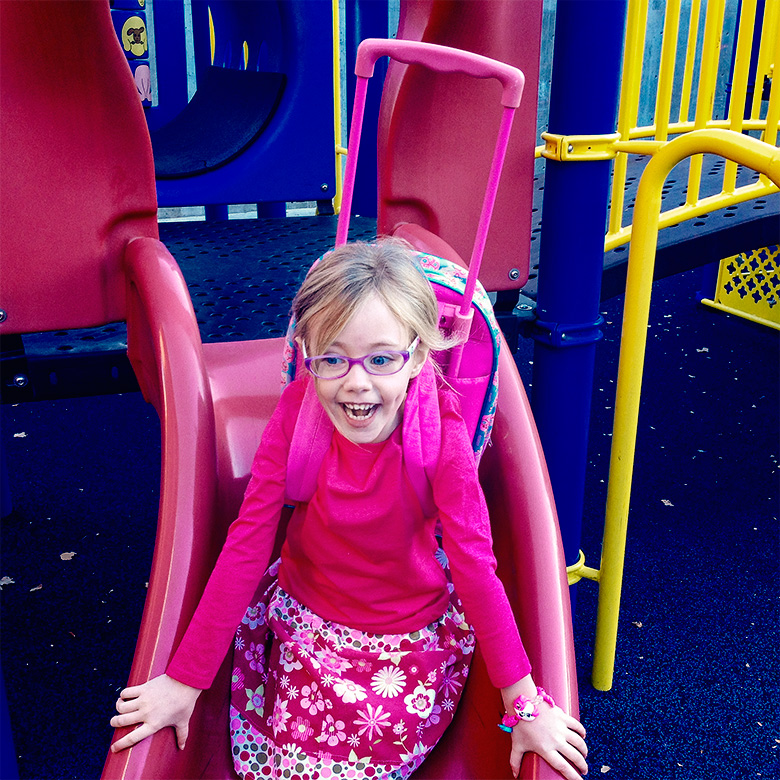 Marlo’s anxiety has shown a ton of improvement during the school day since we assembled the notebook of photos for her to keep in her backpack, but her drop offs have continued to be a little rough. Okay, very rough. I thought we were making progress because she wasn’t crying the entire time she was hanging up her backpack and coat, but then one day she planted her feet outside the room, stiffened her entire body and said through trembling lips, “I am going to stand here forever.”

And she was serious.

One morning a couple of weeks ago a fellow parent whose son is in Marlo’s class noticed that she was having a difficult time letting go of my neck. I’d squatted down to give her one last hug when she transformed into an octopus, wrapped every limb around my body and nearly choked me to death. I compare Marlo to an octopus quite often, usually when I’m trying to describe what it feels like whenever she’s sitting in my lap: imagine that an octopus has you in a headlock with three of its tentacles and is using the rest to tap dance on your thighs. That.

After Marlo tearfully entered the room that mother, a woman named Kelsey, approached me and touched me gently on the arm.

“I hope you don’t mind… I noticed that Marlo sometimes has a hard time going into class and my son has experienced the same difficulty with this transition,” she said not knowing that I very much wanted to hug her and then request that she cradle me like a baby and carry me home.

“Oh, yeah?” I responded, so full of relief that someone could empathize. “Has any technique really worked for him?”

We swapped numbers and set up a play date between Marlo and her son Jonah to gauge how well they’d get along, and after nearly two hours of running and hiding and gleeful screaming we felt more than confident that the two of them were a good match. The following morning we decided to meet up early outside the classroom to let them run around, hoping that it might distract Marlo from the anxiety she feels about going inside.

Keep in mind that I show up early every morning hoping that she’ll let go of my body, grab a fellow classmate and run in circles like almost every other kid is doing. But she has refused to do so. She has clung to my leg or my neck and buried her head next to mine every single morning. That is, up until that morning with Jonah. For the first time this year I stood there feeling somewhat naked having no octopus draped across my torso. It was so incredibly disorienting. I really did feel physically exposed, like I should hurry up and hide my boobs.

Yeah, I know. I’m a “would hide my boobs first” kind of person. If you’d hide your crotch first, that’s fine, we can still hang out together. But I can’t promise you that my brain won’t involuntarily analyze your areolae.

Marlo and Jonah have played together every morning since then, and by day three of this partnership Marlo was going into the classroom with a little hesitation, but without any crying or protestation. I’d look at Kelsey and mouth the words, “IS THIS REALLY HAPPENING?” And she’d give me the thumbs up. And then I’d moonwalk, spin in a circle and jump into splits. Don’t worry, I only pulled two muscles. It only hurts a little bit when I walk or sit or breathe.

And then this morning… from the moment we got out of the car she ran four steps ahead of me to chase a whole group of kids. She jumped and laughed and told jokes in funny voices, and when the bell rang, a sound that usually pierces straight through my gut because it signals the inevitable heartbreaking scene of my child in the throes of grief, she walked over to me, kissed me on the cheek and then sprinted into the classroom. Without looking back.

This time my arms shot spontaneously over my head and I started jogging in place. Very much like this:

I know regard Jonah as The Magical Miracle Worker. His friendship helped her feel safe, helped her gather the courage to physically and metaphorically cross that threshold. I am now so indebted to Kelsey’s small act of generosity. I can’t thank her enough for touching me on the arm that morning and offering her support. I have too often wanted to do the same for someone else but held back because I didn’t want another mother to think that I was being judgmental, and Kelsey has shown me that the benefit of reaching out far outweighs that risk.