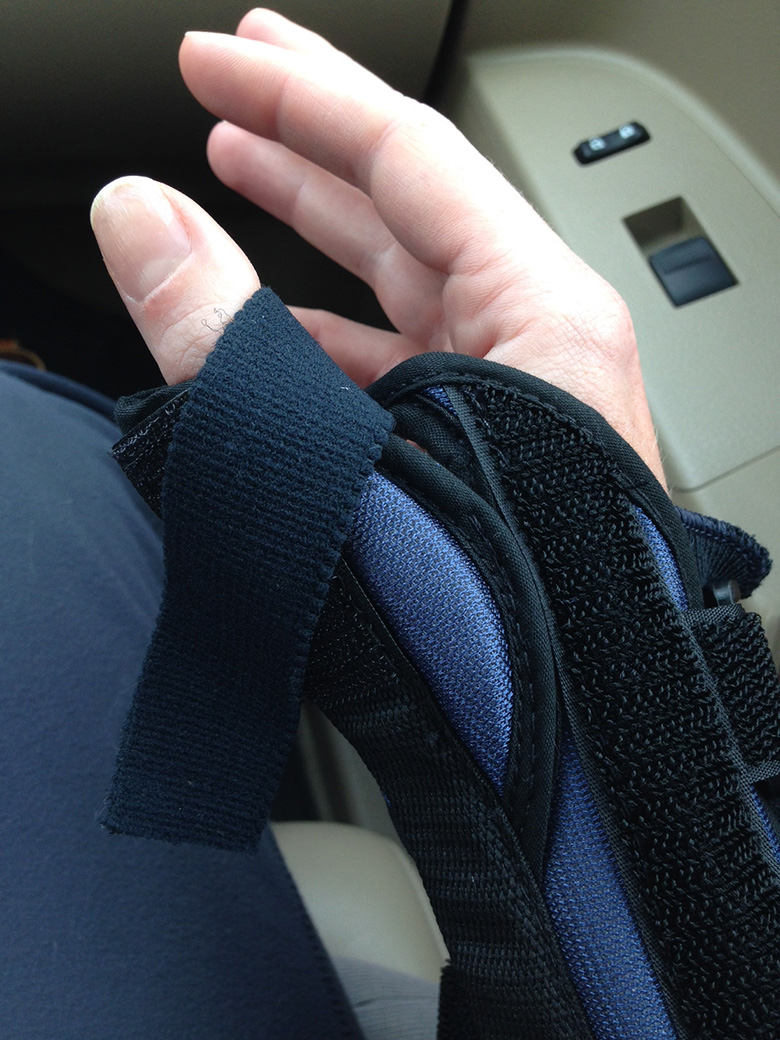 So here is what I’ve got so far:

“Yeah, this. You see, there was this bear, this huge bear…” And then I pause, shake my head and hope that whoever has just asked me about my hand gets the idea. I’m wearing a cast because I took out a bear. And that bear’s family took one look at him and was all WHAT HAPPENED TO YOU.

A bear would work. There are bears in Utah. Or maybe I just say that I got into a brawl with my sister wife.

I’m practicing this here because every time I tell the truth someone says, “You have GOT to come up with a better story.” Like, do not admit to that, Heather. Apparently, admitting that I have immobilized my entire right arm due to texting is worthy of ridicule. Like, I’ve done some pretty stupid things in my life, but a texting injury? I might as well tell people that I went up for a high five, missed and smacked that person in the face.

But it’s the truth. One Saturday afternoon in early August I texted so much and so furiously that I woke up the next morning with a shooting pain in my right thumb. I could barely move it and began texting with my index and middle fingers. That compensation eventually stretched the pain out over my entire hand, around my wrist and up into my elbow. When that pain reached my shoulder I finally called the doctor. Her nurse asked why I needed to see her.

“I texted too hard.”

Yeah. She laughed at me. Which means you are in good company.

By the time I got in to see my doctor I had enough sense to start calling it “a repetitive stress injury” which sounds a lot better than I WAS YELLING THROUGH MY FINGERS. She inspected the swelling around my thumb and made a sound indicating that she was not going to take any chances with it, eventually referring me to a sports doctor in the same practice. Until I could get in to see him I was supposed to apply heat and give my entire right hand some rest. Um… let’s see… give my entire right hand some rest. You are indeed correct if you guessed that I made a joke about excessive masturbation right then and there.

Wait. I’ve got it now: “This? This is a sexting injury. Just a ton of strenuous, ruthless sexting.”

Within a few days I was sitting across from that sports doctor who explained in great detail that women seem to suffer these hand and wrist and finger issues much more frequently than men. What I’m experiencing isn’t carpel tunnel. It’s inflammation in the tendons and tissues surrounding a certain bone in my thumb that I have strained by vigorously getting my point across in capital letters. To remedy this he gave me a sturdy, velcro cast that restrains all movement in my thumb and prescribed a round of prednisone to help reduce the swelling.

A friend of mine very recently told me a horror story about her boyfriend and the rage he experienced while taking prednisone, and that was the only knowledge I had of this steroid going into this diagnosis. When I asked the doctor about potential side effects he said, “Eh… you might get a little agitated.”

“Well,” he explained further. “You might want to warn everyone around you that you could get very angry for no reason whatsoever.”

I should have taken that explanation a little more seriously because by day three I was snapping plastic knives in half across my thighs for the sole purpose of giving my inner rage some sort of outlet. Air made me mad. Having to blink my eyes exasperated me so badly that I considered gouging them out with my bare hands. When I could not get the top off of a bottle of Gatorade, I walked out into the middle of the street and hurled the whole thing like a football at the horizon.

But then, there was also a shit ton of crying. Hours and hours of crying. Full-body crying that shook my torso and caused my eyes to swell shut. FOR NO REASON WHATSOEVER. I tried to think of a reason because when someone would ask me why I’d been crying I’d get so mad that I’d snap a plastic knife in half across my thigh.

I finally couldn’t take it anymore and called the doctor to tell him that we needed to take a different approach immediately. But not before I asked my followers on twitter and Facebook if they’d had any weird reactions to prednisone. DID THEY EVER.

@dooce Hunger, ALL THE ENERGY, none of the sleep, jitters. More hunger.

@dooce jittery rage, no sleep. When my son was on it at 11 months, it was BABY HULK RAGE.

@dooce Can it just be an animated gif of Randy Macho Man savage eating ice cream from his fist but looking sort of sad anyway?

@dooce Who needs sleep when my socks need alphabetizing?

“Said to my mother while attending niece’s dance recital. “I can’t believe I thought I could get through this without a snack. I am 2 dance numbers away from eating my purse.”

“The lint on this floor is looking tasty and I am ashamed.”

“Nevermind me, I’ll just be over here cleaning the baseboards and eating a double bacon cheeseburger at 3 am. If you walk out of the bedroom and look at me funny, I’ll assume it’s because I look like the Stay-puft Marshmallow Man and either sob like my grandma died, or rip you to shreds with my teeth.”

“Can’t get off the couch, crying because the world is ending and I want to go with it.”

“I feel great but what to punch you in the face!”

“Don’t make me kill you. Now get me chocolate.”

“My friend slept in a tent in her back yard and wrote a letter to Mikhail Gorbachev.”

“Should I cry or stab the person in front of me with an umbrella and then scrapbook the experience until 3am?”

I’m sure there are just as many if not more people who have no adverse reaction whatsoever to prednisone, but these responses gave me the reason I needed to cry! I sobbed with relief! THANK YOU NOW EXCUSE ME WHILE I GO CHEW ON SOME BROKEN GLASS.