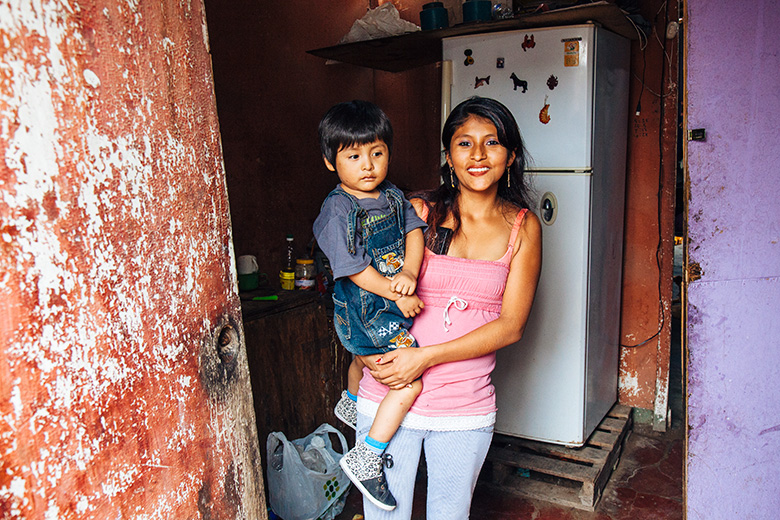 On Sunday morning Kristen Howerton, Rebecca Woolf, Sarah James and I joined Blake Goodfellow, the Country Director of Krochet Kids Peru, and his wife Sarah for a brief breakfast at a cafe in Barranca, a bohemian district of Lima that reminded me a lot of San Francisco and parts of LA. Bougainvillea crawled up and over every textured wall reaching out to graze the heads of passersby who leisurely walked their dogs on leashes. This did not make any sense to me whatsoever. Yes. Normal things blow my mind. The earth is round? I cannot possibly wrap my head around that. Do explain.

The night before after landing in Lima we drove a half hour to our small hotel in Barranco while Kristen recalled her last trip to visit KK Peru, one in which she had been sitting in the front passenger seat of a car when suddenly someone smashed through the window and grabbed the phone from her hands. We were instructed then to keep our valuables hidden from site while driving, at least in certain neighborhoods, and that roaming dogs sometimes have a tendency to bite. Roaming dogs who might have rabies. I guess I didn’t know what to expect having not seen Peru in daylight yet.

It would further seem incongruous when we drove only four miles to the district of Chorrillos where paved roads transformed into rocky dirt that swirled into dust underneath the wheels of our van. Blake had briefed us at breakfast on the mentoring program at the heart of Krochet Kids intl., one in which they provide vulnerable, impoverished women the education and support needed to learn and refine the skills required to enter the broader workforce, either by finding a well-paying job or by starting their own business.

Like I said, this is at the heart of this organization. Yes, they make and sell clothes targeted toward very white Millenials who spend their days art directing their lives, white kids who spend hours styling their toast and cappuccinos before posting a photo of it to Instagram. Honest to god, if I see one more damn ice cream cone posed just-so in front of some artsy wall. Kristen actually took a photo of every single coffee she drank while we were there. Specifically because she knew it would give me hives.

But the very purpose of Krochet Kids intl.’s existence is this program, is giving these women what they need to thrive in their communities both economically and psychologically.

We split up into two groups when we arrived in Chorrillos, and I joined Rebecca and Sarah to spend the day with two of the women benefitting from this program. First we met up with Rosa Barahona who lives in a shack the size of my dining room with her mother and her two-year-old son Gustavo. Rosa is 20-years-old, a feisty yet doting mother whose face lit up the dark interior of her home, one with a crumbling concrete floor and a corrugated metal roof that let in light through a three-inch gap at the top of every wall. She has no running water, no refrigerator, and uses the bathroom in a small wooden structure outside that conceals a giant hole in the ground.

And yet, she beamed, her perfectly applied eyeshadow drawing out the hue of her shirt. Despite having to raise her son on her own, his father having fled once he found out she was pregnant, she feels good about where she is headed, about the tangible progress she’s made. KK Peru provides childcare for Gustavo, and that has been critical for her and so many of the women in the program.

It proved life-changing for Aida Torpoco, a 31-year-old mother of four who had to quit her job selling orange juice at the local market. The newborn she had to take with her, a baby named Akemi whom she strapped to her chest every morning, was getting sick from the cold. Her husband refused to work and was therefore leaving her and all four of her children struggling to make it day to day. She eventually had to kick him out for potentially dangerous and irresponsible behavior.

Akemi was born two months premature, and Aida could barely keep up with her other three children—two boys ages 12 and five, and another girl who is 10. When a mentor with Krochet Kids Peru showed up at her door she was holding Akemi in her arms and was convinced that they were there to take away her baby. She recounted this story to us there eight months later with a bit of a chuckle, physically showing how she tried to hide the baby, knowing now how far she’s come because of that knock on the door.

But this is a circumstance I and so many of you will not ever be able to comprehend. Never would we stand at the door of our home, our two-month-old baby in our arms, thinking some agency has shown up to take her away and terrified that they have the authority to do so.

Neither Rosa nor Aida have a high school degree, and without one, especially in this part of Lima, they would find it nearly impossible to find a job that would provide for even a day’s worth of food for their families.

KK Peru is not only providing them a full-time income but also teaching them how to budget and save money, how to network with other potential business partners, and how to go back and finish their degrees. The mentors also provide emotional and psychological guidance as many of the women have escaped abusive relationships and are living with other family members who do not support their desire to work.

Someone commented on one of my Instagram photos captioned with “#thisisempowerment” asking what that means exactly. It’s this: Aida dreams of opening her own restaurant that would serve the needs of local construction workers. Now that she has a consistent income, business training and valuable networked relationships she is well on her way to making that happen.

Rosa dreams of becoming lawyer, and when she expressed early on to one of the mentors that she knew it couldn’t possibly ever happen—not for someone like her who lives where she does and has no resources—that mentor immediately laid out a plan that would lead her directly there, directly to the position of the lawyer Rosa herself used to find the father of her son to require that he pay child support.

Another commenter expressed worry about exploitation in these kinds of operations. The women enrolled in this mentoring program are all treated as independent contractors who earn based on whatever they want to invest of themselves into the work. The workday lasts only eight hours with an hour dedicated to lunch. Along with a steady and above fair wage, education and ongoing mentoring each woman is offered onsite childcare. I visited the facility, and if the ladies weren’t busy sewing or knitting they were laughing with each other or helpfully inspecting each other’s work. The whole operation has a palpable sense of ease about it.

Everyone is relaxed, except for maybe Blake who has built this up from absolutely nothing to an operation of more than 100 people in less than four years.

80% of this mentoring program is funded by the sale of product, like the shirt you can see me wearing in this photo, a shirt made and signed by Lesly Castillo whom I had the pleasure of meeting:

No, I’m not a Millennial. In fact, I’m old enough to a be a Millenial’s grumpy great grandmother who sees them at Thanksgiving and tells them to get off of their goddamn phone and have a conversation in person already. But that shirt will become a staple of my wardrobe. It’s super casual and comfortable as is most of their Spring 2015 line:

The rest is funded through sponsorships. Here’s where you’re going, oh no. No more money from me, Heather. And here’s where I’m going, thank you for even reading this far, and I get it. Money is tight.

But I recently wrote about how I’m parenting two girls full time by myself, and that when I get weary or frustrated or feel defeated I feel so outraged on behalf of women just like Aida and Rosa who have none of the resources that I am privileged to enjoy. I saw it all firsthand, I sat in their homes and listened to their stories over a lunch lovingly prepared for me and Rebecca, these strange white women who blog? Who what? Yes. I get paid to write about my feelings OH MY GOD WHAT IF I REALLY AM A MILLENIAL. GROSS.

I’m sponsoring one of the women at Krochet Kids Peru at $35/month to fund the education aspect of her mentoring process and would invite you to give the same gift. That’s what I would spend on a latte every morning for seven days.

These are the exact women I feel obligated to speak up for. My furious outrage in those moments of frustration are pretty useless if I don’t actually do something about it. This is my chance.