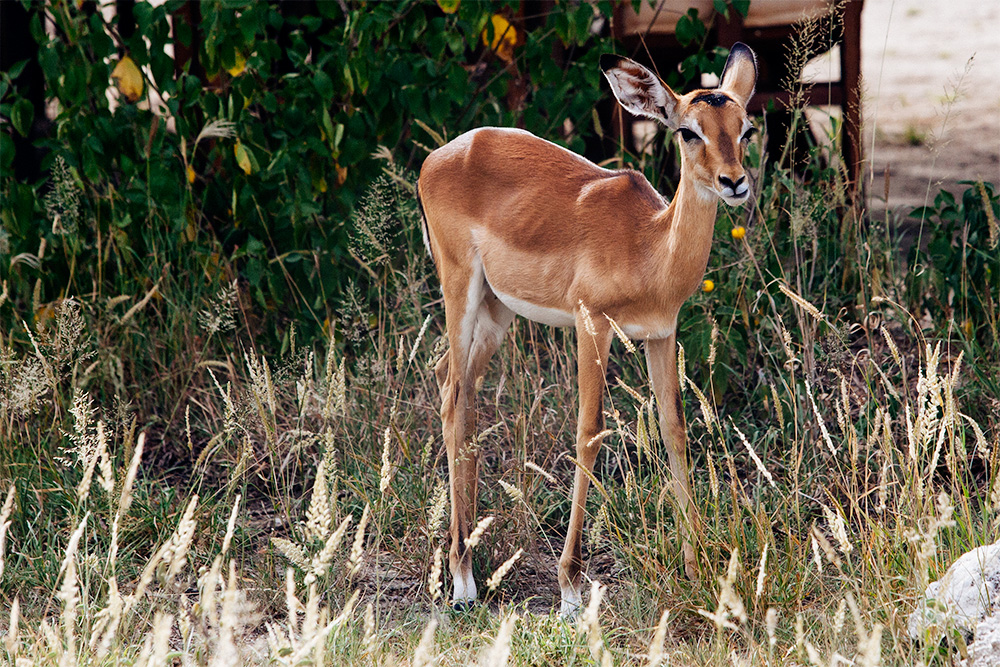 In between visits to clinics and schools our group in Tanzania got to spend some time in the bush with a team of people well-versed in showcasing the land and wildlife. Last year one of the safari guides named Alan saved an orphaned impala from two jackals, and when he was recounting how it all happened I kept shaking my head insistent that he was joking about the whole thing. Because I got the word jackal mixed up with hyena in my head, and from what I have learned through years of watching National Geographic Specials, one does not to want to fuck with a hyena. Cheetahs run away from hyenas. Those hyenas would have seen Alan coming, dropped the orphaned impala, and run straight for him thinking, “We are going to eat like kings for weeks.”

Turns out he was telling the truth. Jackals are a bit smaller and less lethal.

This is that orphaned impala:

Alan had not given him a name, so we immediately started calling him Obama. Barack is a household name in Tanzania. In fact, we met several children under the age of five named Obama. A girl we met at a school asked if we knew Obama since we were from America. This also happened:

Vendor on the street in Zanzibar: "You from Germany? No? France? No? You from Obamaland? Ah! Then *YES YOU CAN* buy these things."

Obama sleeps at Alan’s feet, so I asked him what he was going to do when Obama got too big or boisterous for that. He and some of the other guides who were overhearing this conversation all stared at me blankly as if the most stupid question had just come out of my face.

“I doubt he will ever get too big,” Alan responded.

“Wait.. what?” I asked because I did take AP Biology in high school.

The head safari guide George (HI GEORGE I KNOW I SAID I WOULDN’T BLOG ABUOT YOU OOPS) clarified things, “Nature will most likely take over, Heather.”

“Yes, that is what happens in the wild,” he interrupted.

“But isn’t there, like, some animal sanctuary where you could send him? There has to be an animal sanctuary. TELL ME THERE IS AN ANIMAL SANCTUARY.” You could say that Marlo comes by her love of animals naturally.

Alan turned to George and piped up. “Did she really just say that?”

I’m certain these guides see things on a regular basis—wild things, natural things—that demonstrate in vivid detail the circle of life and must accept it for what it is. And I realized that my sentimentality was a little misplaced.

But dammit, look at that baby impala who let us pet its head and begged for scraps of our meals like Chuck and Coco always do. May Obama live to an age where Alan really does have to consider what he’s going to do because his horns keep poking holes in his mattress.