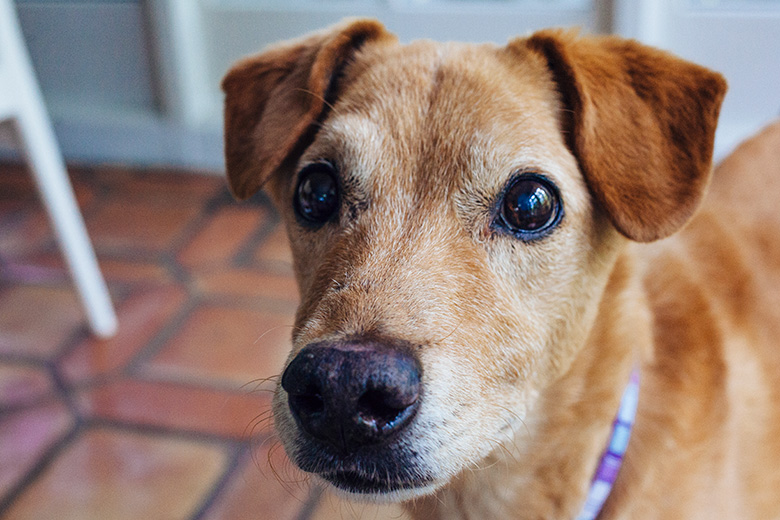 “I personally believe that dogs are into quality vs. quantity of life, and he knows you’re hurting. And he wants to know if you’re going to be okay when he’s gone.”

In 2008 I hired a trainer to work out some kinks with Coco, and during some of our training sessions she got to spend some time with Chuck, witness his unique personality, watch him slink off when bored with the conversation. Once while traveling I paid her to board the dogs at her home, and when she returned them she handed over Chuck’s leash, pointed at him and said, “That ain’t no dog.”

I laughed open mouthed. How many people have met him and expressed something similar? There is no other dog quite so peculiar in an almost professorial way.

I had a long talk with her a week ago, and the quote above is what she told me after I shared with her what I’m about to share with you.

When I arrived home from dropping the girls off with their father in New York, I immediately noticed that Chuck’s condition was getting progressively worse. Exponentially, almost. He was waking up in his own feces every single morning. Because of the way that he is shaped, his poop comes out of the hole for his tail in every diaper that I’ve wrapped around his body. During the day he began pooping near the back door of the basement and smearing it around, sometimes with his face or head. He also stopped listening to or acknowledging any command I gave. He would not come when called. He refused to sit. He did not want to go for a walk.

And then, oddly, he remained lying in the dog bed that is situated near the desk where I work. Normally he prefers to be alone and will slink off to a dark hallway when I sit down at my computer, but last week he stayed put. He hung out all day sleeping, occasionally lifting his head to glance over at my furiously typing hands.

Late last Thursday night after finishing up a project I sat down on the floor next to his fragile, curled up body.

Wait… let me back up a few years. Chuck hasn’t always preferred to be alone. In fact, when friends would come over he’d come find my body and wrap his own around it somehow. If I was sitting on the couch he’d force his way underneath my legs and poke his head out from between my knees to survey the crowd. If I was sitting on the floor he’d authoritatively plop his butt down on one of my crossed legs and press his body into mine so that I had to look around his head to see and talk to my guests.

He preferred that I sit on the floor so that he could do this. He had a sense for it, a radar of sorts, where he’d be in some other part of the house and receive a vision that I was somewhere sitting on the floor. Without fail he’d show up and have a seat in my lap. I’d rub his ears and say, “Fancy seeing you here.”

Chuck hasn’t tried to sit in my lap in almost four years. Not once. There have been certain events that triggered Chuck’s reclusive nature. Yes, my divorce is prominent among them, but I can pinpoint several others that have sent him brooding into dark hallways. Aging hasn’t been a joyride for him, either.

When I sat down next to him last Thursday evening he didn’t move, didn’t blink, didn’t acknowledge that I was there. I reached over, cupped his head in my hands and lifted it toward my face. He didn’t jerk it away, but he did turn his head out of my hands to lay it back on the bed. I tried this again and achieved the same result. The third time I held the back of his ears a little more firmly so that I could catch his eyes.

He finally didn’t turn away.

I held his gaze with mine for a few seconds and said, “Hey, we need to talk.”

He blinked but then continued to look me squarely in the eyes.

“You need to tell me how you’re feeling,” I said looking back into the dark expanse of wisdom so deep that if you jumped in you’d never hit the bottom.

We sat there staring at each other for over a minute, neither of us looking away. I remembered the first time I fumbled with his leash on the corner of Stanley Avenue in Los Angeles, the moment he realized that his neck wasn’t attached to my hand and the electric current that circulated through his entire body to set off the lightbulb above his head. I had to chase that impish puppy for three blocks as he darted in and out of alleys and hid behind manicured hedges. Here I was searching for him again.

He finally blinked one more time, and then he very painfully stretched out his body from the circle of where he’d been curled up. I set my hands on the floor on either side of me and sucked in an involuntary sharp breath as he stood up, took a few steps toward me and climbed into my lap.

His dignity would have at some other point in his life preferred that I not talk about what happened next, but I know that he wants me to set that aside for now so that I can share this with all of you.

Chuck tried to sit down on my leg like he had so many times before, but he physically could not do so. His hind legs trembled as he attempted to set himself down. So I reached up, hugged him close to me and eased his butt onto my right thigh. I realized then that his diaper was wet, but that thought was pushed flat against a tiny corner of my brain as his words filled the whole of it like rising water.

He pushed his torso against my chest, tucked his head up under my chin and rested it on my left shoulder. I gripped him with enough force to communicate that I was listening, that I could hear him pleading, but gently enough to honor all of his protruding bones.

We remained in that embrace for over 30 minutes. I’m not sure I’ve ever been given a gift so valuable.

Yesterday afternoon at approximately 3:15 PM Mountain Time, The Former Congressman Henry Buck Chucklesworth died peacefully in my arms. I had the privilege of catching his last breath on my knee. I then cradled my baby boy like I used to do 13 years ago while dozing on the couch looking out at a California sunset, the sky under which he was born.

I know how much all of you loved him, and I reassured that marvelous, professorial dog in the hours leading up to those last moments that you, too, would be okay that he wanted to leave.