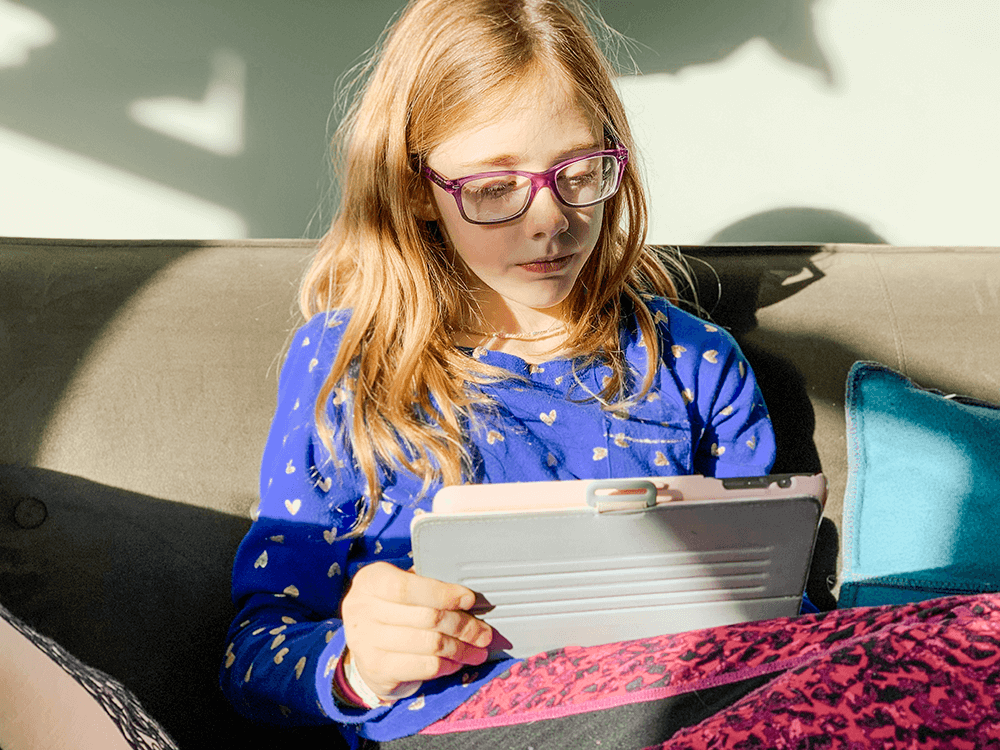 Earlier this year I wrote about Marlo’s fourth grade homework and I even mentioned that I knew I’d get a call from the principal for writing about it AND I DID, but I can’t find it so maybe I just talked about it on my podcast—I WONDER WHO IS SPYING ON MY PODCAST, THIS IS RELEVANT, SEE BELOW AS I AM PARTNERING WITH MOZILLA ON SOMETHING AMAZING, OPINIONS ARE MY OWN AS USUAL EXCEPT FOR THAT TIME LETA PAID ME TO SAY ONLINE THAT I LOVED HER.

Either way, the principal was super lovely about the whole thing as was Marlo’s teacher who very gently communicated to me that I needed to calm down. And she was so convincing in the way that she did so that this was the only instance in the history of the world when someone told someone to calm down and that person’s head didn’t spontaneously combust.

I trusted her teacher, and I’m glad I did. I needed to calm down. But there was one teeny, tiny not so teeny, tiny little thing that I did on my end that improved the whole afternoon experience by about a thousand percent. And you’re not going to believe this coming from a woman who would let her child attend school without pants in the snow if it meant that the kid would stop complaining that it is so unfair that humans have to wear pants when Welsh Corgis do not: I took away Marlo’s iPad.

I swiped that device out of her hands and hid it one Monday afternoon and did not return it to her until after dinner on Friday night. Her attention had been all over the place, and a chart of her moods resembled a sine curve. Yes, she was dealing with a far heavier course load than ever before, but I had a hunch. And I was right. She was rushing to get through homework and piano practice and anything else that was taking her away from the— ahem—astonishingly deep well of “very satisfying” YouTube videos that kids are into these days. I know. That sounds a lot more disturbing than it is, and I guess it is disturbing if watching a six-minute video of someone kneading a wad of bread dough is disturbing to you.

The fact that someone would want to sit through a six-minute video of someone kneading a wad of bread dough is a little disturbing to me.

She was addicted to that device, and everything else was getting in the way. Once that device was no longer an option, she started to slow down. She started paying attention. She started reading notes in her piano music. She started painting and writing novels. She started talking nicely to her sister and spending extra time with Coco. Stripping her of that addiction during the week changed her. I had ignored all the research warning of the dangers of too much screen time because her sister shoots her phone through her veins exactly like a heroin addict and still gets perfect grades and functions better than most adults. But, are there two siblings who could possibly be more different than Leta and Marlo? Wait. Don’t answer that. My mother The Avon World Sales Leader is one of ten kids and one or two or many of her siblings are far worse than your uncle who is in jail again because he won’t stop robbing his local 7-Eleven in the nude. 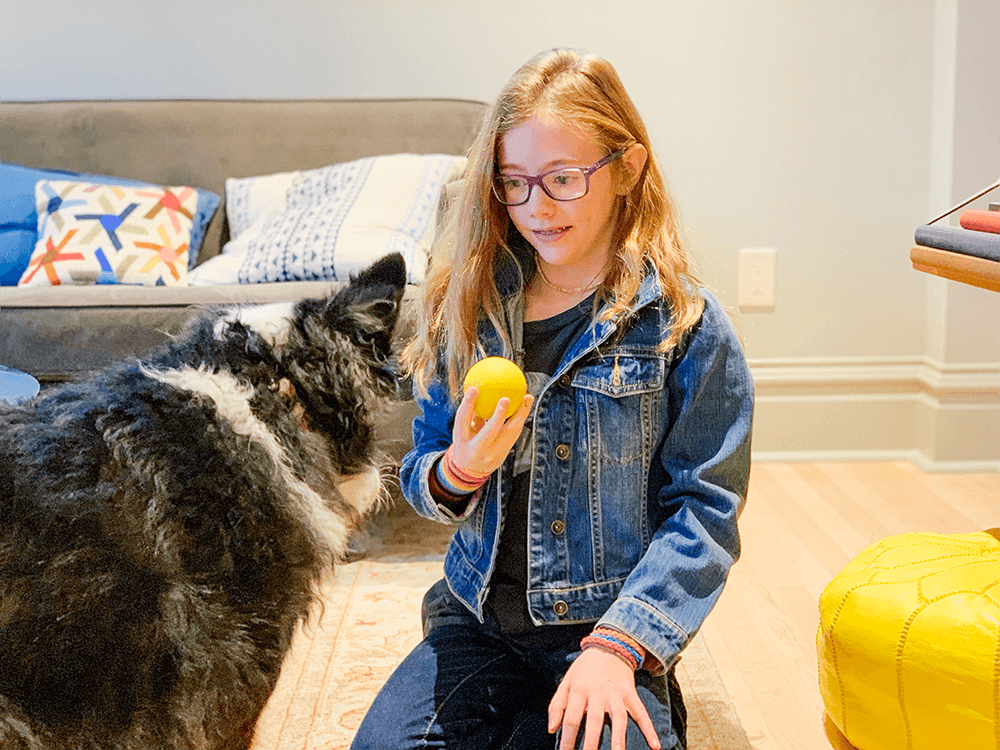 Becoming The Mother Who Is Limiting Screen Time And Loving It made me even more curious about what she’d been doing with that screen time (BREAD DOUGH IT TURNS OUT), what other things I needed to know about monitoring her, and what the device was tracking about her that I didn’t even know about. Have you guys ever seen that episode of “Black Mirror” that starts with a kid on his laptop and the whole thing goes totally off the rails when he gets a message that he’s being watched through his computer and whoever has sent the message knows exactly what the kid has been up to? Yeah, well, if you haven’t ever seen “Black Mirror” or that episode of “Black Mirror”, just know that I got about four minutes into that episode, turned it off, shut my blinds and then crawled under my bed and hid for two days while sending up prayers to at least 14 different deities I learned about while earning my degree in Fine Arts.

I understand now why certain nerds I know have black electrical tape stretched across the cameras on their computers. PRO TIP: Follow the nerds wherever they go during the apocalypse.

ALSO NOTE: I use the term “nerd” not just lovingly but with total adoration and devotion. I worship at their feet.

All of this is to say that when the Mozilla Foundation approached me and asked if I would help spread the word about the second iteration of a guide they’ve developed to help consumers better understand the potentially creepy technology behind the products they’re buying this season, I slid Marlo’s iPad across the figurative table and asked, “Are the bread kneaders spying on my kid?”

*privacy not included is a free, easy-to-navigate guide to help people like you and me buy safer and more secure products for our kids and for ourselves and for anyone else who might not know that their bathroom scale could be sharing their information with 3rd parties for unexpected reasons. Barbara knows all about your recent fluctuation in weight, Dennis. Should have done your research. She’s going to tell your mom.

Before we get into the basics, you should check out the interactive Creep-O-Meter that lets you rate a product on a scale from “Not creepy” to “Super creepy” depending on how you feel about what info the product can collect and share about you. 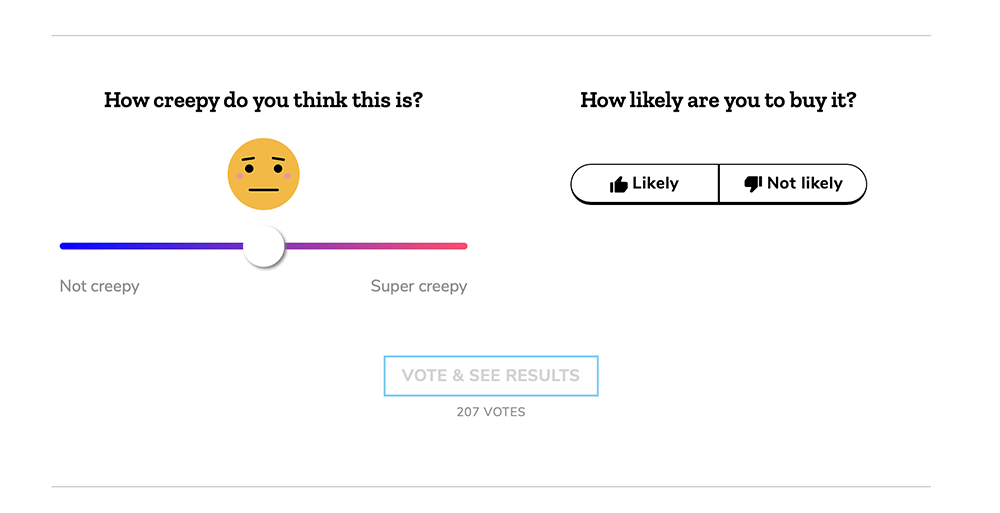 For instance, the Furbo dog camera. I adore the levity they have injected into this guide—“Is it creepy? Probably. Is your furry family member worth it? Most definitely!” And then the answer to, “What could happen if something went wrong?” is “Bad people could hack in and spy on you like you spy on your dog.”

I am in the 44% who find that product SUPER CREEPY. Stop spying on your dog, for one thing. Dogs are smarter than your dumb two-year-old who just tried to eat a stapler. Coco would hack into that thing and spy on me and I’d have no idea.

Also, while writing this post I honestly got way too distracted by reading the entire thing. The writing in this guide is just so funny and relatable and clever. Jen, the lovely creator of this content, needs to write a book or star in her own show so that the fun I am having doesn’t ever have to end. See instance below:

Here’s what the guide answers for us:

1. Can it spy on you?
2. What does it know about you?
3. Can you control it?
4. Does the company show they care about their customers?
5. What could happen if something goes wrong?

And it’s written in a way that makes you want to read all of it. What it wants you to do most is get to know what you are comfortable with. How much privacy is important to you? My answer? Please, Mom, do not go look at the search history on my iPad. FOR YOUR OWN GOOD. Second, do a little research. Anything can be hacked. Literally anything including a hot dog, and if you don’t have the time to figure out if something has a camera or a microphone or tracks your location, this guide does your legwork. And finally, understand the risks. Your toothbrush may track your location, but if it never leaves your bathroom, you’re probably okay. Are you regularly taking it with you to rob your local 7-Eleven in the nude? Might want to rethink a toothbrush that could be used against you in court.

(Here are some helpful links: the launch blog post about the guide and what constitutes their Minimum Security Standards)

You can browse the guide by type of product or filter it by mozilla’s Minimum Security Standards, Creepiness, or Likelihood to Buy. 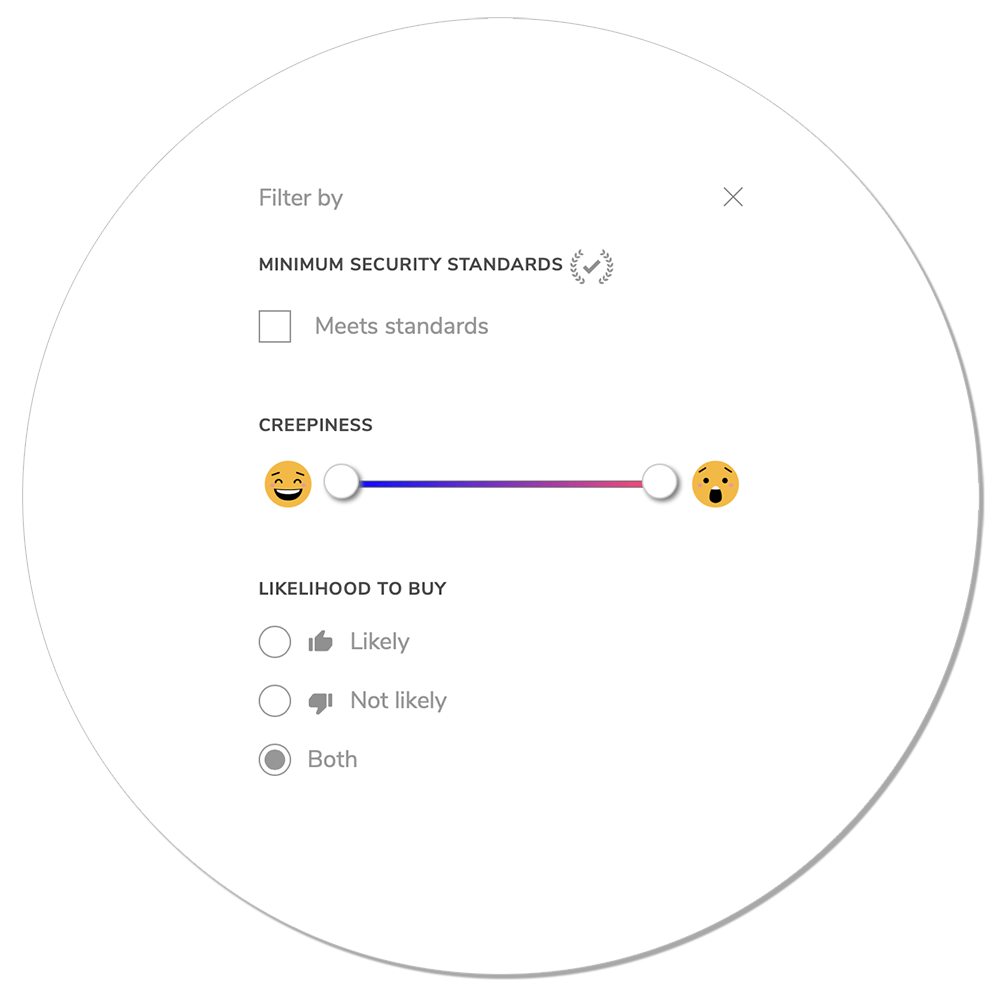 Least creepy product on the guide? The Nintendo Switch. Mozilla has done a ton of research on these companies’ policies and finds that Nintendo does a pretty good job with its security controls.

And then you look at three of the four creepiest products on the list, and they are all made by… Amazon. Gulp. There is a pattern here: “You could say, ‘Hey Alexa, call Mom’ in your sleep and end up with a cam experience you’d rather not have.”

ANECDOTAL EVIDENCE: I once had a nerd who refused to come into my home until I removed my Amazon Echo. Not just unplug it. REMOVE IT. I am not kidding.

What’s also interesting is that privacy and security may come with a price tag. Apple does a pretty stellar job with security. But even its cheapest version of the iPad is twice as expensive as an Amazon Fire HD Tablet which has a far creepier rating. 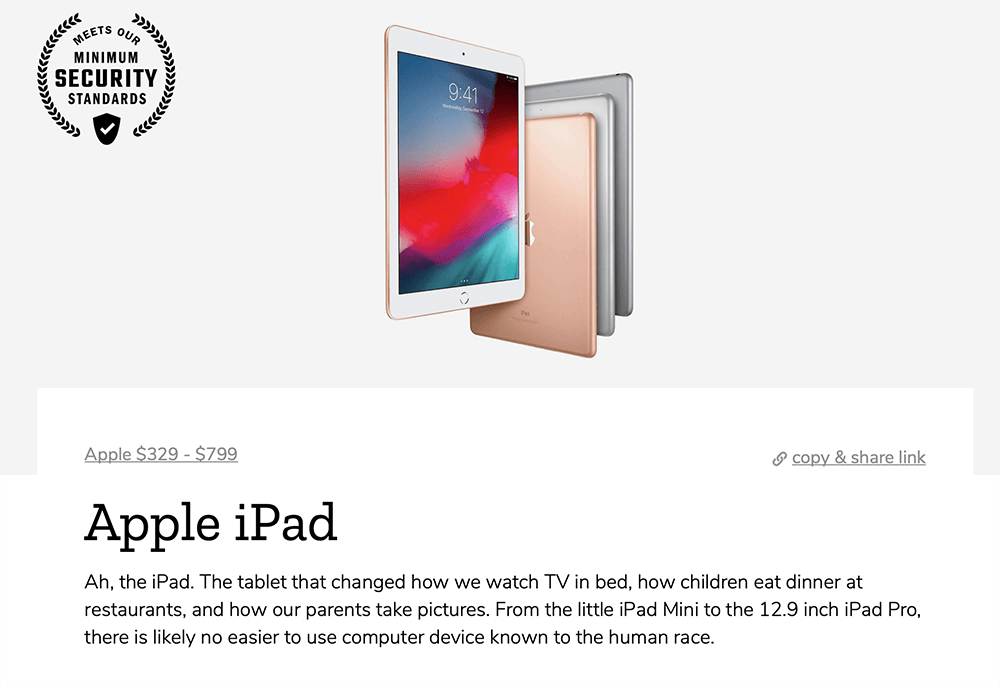 Also, companies are paying attention. That Creep-O-Meter score is based entirely on the opinions of users and consumers, not by Mozilla and not by other companies. It’s regular shoppers who are reading what a product could potentially do and saying, “EWWW!” or conversely, “Who cares if Dennis finds out!” There are already over 31,000 user ratings for this guide so far. And that kind of insight is pretty powerful in terms of getting companies to pay attention to what we’re all figuring out and what we’re comfortable with.

For instance: I do not want Dennis to know my recent fluctuation in weight, thank you very much. I actually know a Dennis in real life and if he reads this he is going to be super confused as to why I think he cares one whit about the scale in my bathroom. And I would say, “Because Barbara really cares about yours, apparently.”

I love the idea behind the guide, the writing, the design, the whole generosity of spirit in creating something a non-technical person can use when fumbling around the more concerning aspects of gadgets we’re bringing into our lives. Many thanks to Mozilla for putting it together when so many of us need something like this and are making the hard purchasing decisions.

This post is brought to you in partnership with Mozilla