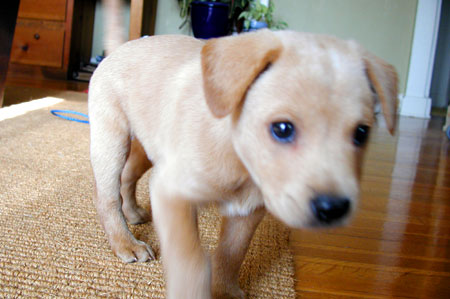 Did I ever tell you about that one time someone stole my dog? Yeah, her name was Bootsie, and she was a five-month-old terrier mix that we met at the Burbank Humane Society, and I loved her and she loved me. Her whole body was black except for her feet; they were white. Thatâ€™s why I called her Bootsie, because she looked like she had boots on. Do you want to throw up now?

I only knew her for about a half hour, but what a half hour it was! Full of kisses and cuddles and little puppy bites, that half hour was spent in a 10 x 10 square foot stretch of grass behind the kennels at the Humane Society. I knew that I wanted to adopt her, but the other member of my family, the one who thinks primarily with the rational part of his brain and not at all with the irrational part, except for times when a piece of shiny hardware with lots of RAM is involved, then itâ€™s ALL ABOUT THE HEART, BABY, that member of my family said that we needed to talk about it.

You can see where this is going, right? You’re saying, “No! Don’t go talk about it!” But we went and talked about it, and while we were eating French fries at a nearby Wendy’s talking about it, somebody else was busy sticking their hand into my chest and ripping out my heart. When we pulled back into the driveway of the shelter, SOMEONE ELSE HAD BOOTSIE IN THEIR CAR. I was horrified. Someone else was taking MY dog away in THEIR car. I jumped out of our car, which was still moving at the time, and I ran over to their car and started banging on their windows. STOP. YOU’RE TAKING MY DOG. They were not impressed and almost ran over me, speeding away with my dog in their back seat. I was so upset that I threw up in the parking lot.

The next day we drove to another shelter in Pasadena. I was determined to have a dog. I just felt that the time was right, the time being a month into unemployment and not yet bored enough with my hair. At the Pasadena shelter you have to be interviewed and deemed worthy of adopting a dog, and until you pass a rigorous admissions process you can’t even look at a dog. I had an easier time getting into BYU than I did being deemed worthy of looking at a shelter full of homeless animals. I know they are just trying to protect the animals, and all, but I aced my A.C.T. I CAN PICK UP POOP. Let me look at a goddamn dog, already!

We interviewed and we were deemed worthy, but we didn’t have our landlord’s telephone number to complete the application. I was going to make up a number, but they call your landlord while you’re sitting there and find out whether or not you’re a good person. We had driven all the way out to Pasadena (about an hour drive from our apartment) and we couldn’t even look at dogs because we didn’t have the landlord’s telephone number and I was about to puke again. I tried calling all my neighbors on the cellphone to see if anyone had the landlord’s phone number but NO ONE COULD FIND THE LANDLORD’S PHONE NUMBER. All my neighbors had extensive brain damage due to years of excessive pot smoking, and one of them even said to me, “Dude… a phone number? Does that have, like, numbers in it?” And then he giggled.

And of course I ran over to her and asked if I could hold that little tiny furball, and of course she said of course, and Jon was of course worried that I was going to get attached to this furball and have another volcanic puke as someone took the furball, put it into the back of their car and drove away. The lady said that her children had found the puppy alone, abandoned on a park bench, and that they couldn’t keep it. So she brought it to the shelter to turn it in. And there was NO FUCKING WAY I was going to let her turn that puppy in, OVER MY PUKING DEAD BODY.

So I asked her, “Can we have him?” And she looked at us and said, “I think you were meant to be here to have him.”

Is that not the fucking cheesiest thing you’ve ever heard?