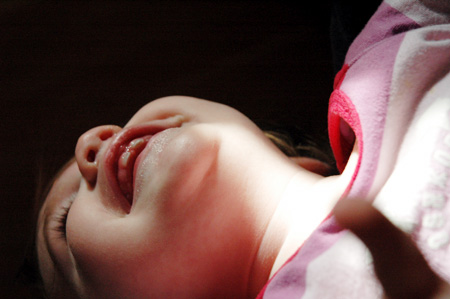 You turned 16-months-old about four days ago but your father and I were in such an early morning alcohol-induced stupor at the hands of well-manicured and coifed Southern women that we were saying things like, “Did you get a picture of that bick bruilding?” I didn’t allow myself to write anything in that state, but I’m sure you’ll forgive me. You know why? Because you can get married however the hell you want to without any fear that I won’t ever speak to you again if you don’t do it my way. THERE IS NO MY WAY, even. At least when it comes to your nuptials. Just don’t go marrying something that walks on all fours including any Southern man who drinks beer for breakfast.

You father and I left you with Grandmommie for five days while we attended Uncle Shan and Aunt Sydneyâ€™s wedding. Grandmommie said you slept in every day and never threw a tantrum or a bowl across the room. Either Grandmommie is one hell of a liar or you pulled one hell of a snow job on the one person in our family who is likely to leave you the most valuable inheritance. Well done, grasshopper. Next up: Grandpa, who will be visiting for the rest of the week. That man bought Krystal hamburgers with coupons SO YOU KNOW heâ€™s sitting on a lifetime savings of cash. Our economic future rests in your hands. No pressure.

The first two days away were thrilling, not because we were away from you but because we got to sleep in past 6 AM on not just one morning BUT TWO WHOLE MORNINGS IN A ROW. And then I started to miss you inexplicably and achingly. At first I was mad about this because we had paid an exorbitant amount of money to Delta Airlines to take us away from you, to get some quality US time, and there I was spending our US time pining for YOU, you who were getting your butt wiped by one of the most powerful women in Avon. But then I started seeing other kids your age and thinking about how big or little you were in comparison and I realized that my life has been changed forever, in the sense that I missed you more than I ever missed my old life. I thought about your incessant babbling, your obsessive-compulsive way of opening and closing boxes, the way you REFUSE to keep any hair-restraining device in place on your head. On the plane ride home we saw a girl two days older than you who had not one hair on her head and I turned to your father and said, â€œOur daughter, I think she has all the hair in the world for all the babies.â€ We could prove this scientifically, we think.

Grandmommie brought you to the airport to pick us up and when we turned the corner to see you sitting there in her arms you looked at us like, â€œWait a minute. Donâ€™t I know you?â€ You then reached out for me and hugged me. I held you and smelled the infant sweat on your neck so glad to be back in your arms, to have your crazy hair tickling my face. On the way to pick up Chuck I sat in the front seat turned around just staring at you memorizing all your features again like multiplication tables on flash cards. We tried to get you to say Mama and Daddy, but instead you sat there bleating a string of the most complicated consonants and vowels that could not be recreated by any modern recording device, an alien language that made perfect sense to you as indicated by your hand gestures and dramatic pauses. Then we played our screaming game where you scream and then I scream just like you and then you scream just like me, and this goes on and on while your father navigates traffic. The game always ends when your father looks at me and poses, â€œDo you like this game? Because Iâ€™m not so sure this game is all that fun, you know, for those of us SITTING NEXT TO YOU.â€

This month youâ€™ve started sleeping in one relatively large chunk in the middle of the day, and I say relatively because one personâ€™s pond is another personâ€™s ocean. Iâ€™m not complaining that one day youâ€™ll sleep for only an hour and the next day youâ€™ll sleep for three hours because AT LEAST YOU ARE SLEEPING. Youâ€™ll now drink from a straw, but not from a sippy cup. One day youâ€™ll eat two hot dogs for lunch, the next day nothing. One day youâ€™ll like going to the park, the next day you act as if driving to the park is like driving over a cliff to your death. I JUST NEVER KNOW. You want to be picked up, you want to be put down. You want that book, no, THAT book, NO THAT BOOK! GOD! THHHHAAAAAAT BOOK. I imagine that this is what itâ€™s like to be married to a mean drunk.

But you know what? Iâ€™m having a lot of fun, no really. Weâ€™ll play together in your room for hours in the morning taking your shoes out of their boxes and stacking them in little shoe walls. Youâ€™ll use my body as your personal jungle gym, always crawling back over me if you go anywhere in the room. And when we do find a book that you can agree on and you hand it to me and sit and my lap and listen as I read each and every page often looking up at my face to see how the words come out of my mouth, I remember people telling me that it would get so much better and I have a feeling that this is what they were talking about.