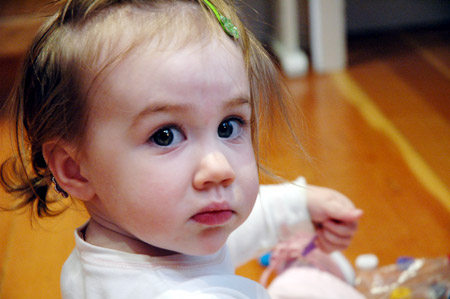 Over the weekend you turned seventeen-months-old. We celebrated by taking you to a huge swimming pool for your first real swimming experience, and while you took to the water without any fuss, you were much more interested in the sunscreen bottle we bought on the way to the pool. You spent almost four hours of your life that day putting the cap on and then pulling it off again, again, and then again. We couldn’t feed you or take off your clothes without separating you from the sunscreen cap and bottle, and there was a moment during one of the vacuum-sealed screaming fits when I thought, why can’t we just let her sleep in her wet swim diaper? Motherhood, Leta, it turns logic ON ITS HEAD. Like magic.

Yesterday was the Fourth of July, one of the few days a year the government says we can all sleep in. THE UNITED STATES GOVERNMENT SAYS SO, so why did you wake up at 5:30 AM, oh traitorous traitor? Usually when you wake up that early we let you talk yourself back to sleep until at least 6 AM, but this time, this day of government-sanctioned sleeping in, you screamed from your room, “MAAAMA!” And when that didn’t work you tried, “NOOOOOOOOOO!” And then when that didn’t work you commenced shaking your crib like a lion in a cage who is separated from steaming, fresh carcass by the the bars of his cage. When I ran into your room you were standing at the end of the bed, your dimpled fists propelling the crib forward, and you instantly yelled, “Hiiiiiiiiiiiiiii!” Hi, indeed, Francis.

Words you know how to say: hi, mama, bo, no, dank ooh, hi, owwee, hi, dada, hi, NOOOO, hi. Number of times you utter each one during the course of an hour: at least 90 times per minute, leaving zero seconds of silence. Number of times during a car ride that you have screamed louder than the radio I have turned up to drown out your Hiiiiiiiiiiii! EVERY. SINGLE. TIME. Which is the same number of times your father has turned to me during a car ride to ask, “Does she do this all the time?” and I have responded, “You have no idea.”

Your new trick this month is to throw yourself face-first to the floor and utter this wounded-boar-left-in-the-woods-to-die sound to get back something we have taken away from you. Admittedly, this is partially our fault, because when you were six months old and we handed you the remote or the telephone you couldn’t do any damage. But now, now you know how to erase important recorded programs, or store numbers on the telephone, or hit REDIAL. Once you even dialed 9-1-1 on the babysitter’s cellphone. I thought about keeping them on the line and saying, “Please, help. I had a baby and I can’t get up.”

One morning last week you suddenly and without warning realized how to open cabinet doors, and upon returning from the bathroom I found you scurrying like a squirrel hoarding nuts across the floor toward your bedroom with a bottle of Windex tucked under your arm. When I took that bottle of Windex away from you I might as well have been cutting your heart out of your chest with dull knives, the sound of your disappointment registering on seismographs at Caltech in Pasadena. Your father and I often wonder if we should pay someone to come into the home and teach us about this particular baby stage because we have no idea what the hell to do with you. We paid a trainer to come help us with Chuck when he was a baby, and that trainer put a leash on Chuck and dragged him an entire city block to get him to obey. Not that we would ever put you on a leash (or, I guess, act on the urge to do so, including the dragging part), but how do you tell someone your age that YOU ARE NOT ALLOWED TO TALK TO ME THAT WAY, when that sentence doesn’t contain one instance of the word “Hi!”?

You’re in this stage of life where the only way to communicate to us is by complaining, and that’s the thing about kids. You can get away with it because you don’t know any better, and as your parents we have to accept that sometimes, more often than not, all you do is complain. When you’re an adult and pay bills and the government takes more than a third of your income, sometimes it’s just not nice to complain all the time, even when you can’t have the remote. EVEN THEN, LETA. People don’t want to hear it all the time because they’ve heard it a thousand times already and at some point you just have to suck it. This last paragraph is more for me than it is for you because when you hang out with someone who does nothing but complain all day you, like me, may want to put that person out on the sidewalk with a sign around her neck that reads, “FREE, OR BEST OFFER.”

What I’m trying to say is, this month when people ask me about my week or my day or even the two hours I’ve been awake with you, instead of barfing all over them and lamenting the fact that damn, Gina, this is so hard, so very very hard, the hardest thing I’ve ever done, wah wah WAH WAH WAH, I’m trying to look at them and say, “She calls me Mama, now. I never knew that word could be so amazing.”