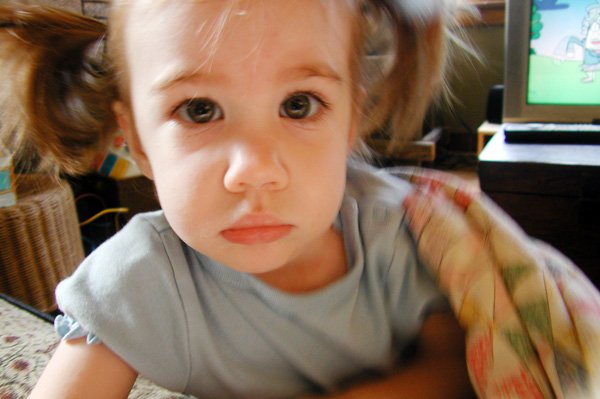 Tomorrow you turn nineteen months old and I would have written this tomorrow but we’re going to be holed up in a cabin near Bear Lake in northern Utah with your father’s side of the family, and let’s face it. Those people are crazy. Yes, my side of the family is insane, but his side is just plain looney. They cook all of their meals, always from scratch, even the desserts. They make cake out of flour and sugar! WHO ARE THESE PEOPLE? Sadly, this means your genes are totally screwed, but that’s okay. Looney people are very cute. Your father is a little worried about me and how I’m going to handle the stress this weekend. We rarely go long distances in the car with you because, well, it’s painful. I’m sure it’s painful for other families with children your age, too, so it’s not just you. Lots of kids are painful. Plus, we’re going to be in a different environment and this is harder on me than it is on you because this means I have to release my sphincter a little bit and let go of my expectations when it comes to your schedule. Here’s a little secret about your Mama: I’m a tad bit obsessive. HA HA! Your dad probably just read that and bruised his head as he smashed it into his monitor. I have you on a strict schedule, so strict that we set our clocks by it, even though every clock in the house says something different. Your father cannot stand this, but I know that the clock in the kitchen is two minutes fast and the clock on the phone is three minutes slow. If he were to change this and make all the clocks say the same thing I think all my limbs would fall off. My entire worldview would be shattered. You already want to take me to show and tell, don’t you? During the past month we have had a hard time keeping up with your vocabulary. You seem to pick up a new word or a new sound every day. Just the other night your Grandpa was talking to you in a Donald Duck voice and you tried your hardest to imitate the sound except it came out sounding more like a lion than a duck. You get an A for effort, though. I have been trying to teach you to tell me UP and DOWN to let me know when you want me to pick you up and put you down, but it wasn’t until I had to put you into a time-out a couple weeks ago that the cogs all clicked. You were throwing a massive fit in the living room for no reason whatsoever and right after I told you not to throw the purple My Little Pony you chucked it probably ten feet across the room. I picked you up, told you that I had warned you not to throw things, and put you in your highchair facing the wall for one minute and thirty seconds. That was probably the longest minute and a half of my life, and when it was over I walked over to you, explained why I had put you there and asked if you wanted up. And I swear to God the Earth split open underneath our house and swallowed the neighborhood as you pulled a roar out of the ground and yelled, “UUUUUUUUUUUUUUUUUUUPPPPPPPPPP!” I tried not to laugh, but holy shit! YOU SPOKE! You’re also very good at saying HI and BYE, especially the latter when your father is about to leave for work. You and I are usually sitting in the living room together watching the morning news when your father leaves for work, and when you see him drape his bag over his arm you start screaming, “BYE BYE! BYE BYE! BYE BYE!” Whenever I answer the phone you start saying BYE BYE before I even say hello because you know it’s coming at some point. And whenever the I come up from the basement when the babysitter is here you crawl over to me as if you’re being chased by hungry wolves and when I pick you up you turn to her and say, “BYE BYE! BYE BYE! BYE BYE!” like, “My mother is back, you can leave now. GO.” Secretly, very deep down inside I totally want to high-five you. One night this month we were standing in line at the grocery store buying a few things for a neighborhood barbecue when your father ran to grab a couple bags of ice. Before he could get back, though, two other people showed up in line behind us and we were all waiting for your father and his Very Slow Ass to return, so I yelled across the store, “JAAAAAAAAHHHHHHN!” in three distinct syllables. Didn’t know you could do that, did you, turn a word with only one vowel into a word that sounds like it has ten? Oh, Leta, the things my side of the family has to teach you. Anyway, right after I finished yelling his name you smiled and yelled, “JAAAH!” And I thought that was the most awesome trick ever, getting you to call your father by his first name. Your father didn’t find it so awesome, but that made it even more awesome for me, and for the next several hours I prompted you to say his name over and over again. Then a few days later we were all sitting in the car together when I turned to you and asked you to say his name. Except this time you looked up at me and said, “DAD.” The consonants in that word had never been so firm, and your father had this awful look on his face, one of victory and triumph and EAT SHIT MAMA. When your Grandpa moved to Utah a few weeks ago he dropped off some boxes of toys that I used to play with when I was very little, including an entire box of Strawberry Shortcake dolls dressed in all of their original outfits and shoes. I didn’t know that my father had kept them, but I’m so glad he did because I used to daydream about having a daughter of my own who would one day play with my toys. At first you didn’t know what to make of the dolls, you couldn’t turn their pages and read them. But slowly over the last few weeks they’ve become your favorite toys, and not only will you crawl around with them in both your hands, but the babysitter has taught you how to hug them and call them your “babies.” It’s an amazing thing to witness, you holding my toys in your tiny hands, and it’s nothing like I ever imagined it would be. None of this is. You don’t look like I imagined you would look, nor do you sound like I daydreamed you would sound. Motherhood is not at all like the image I had in my head for decades. It’s so different, so phenomenally different, and what a marvelous surprise.