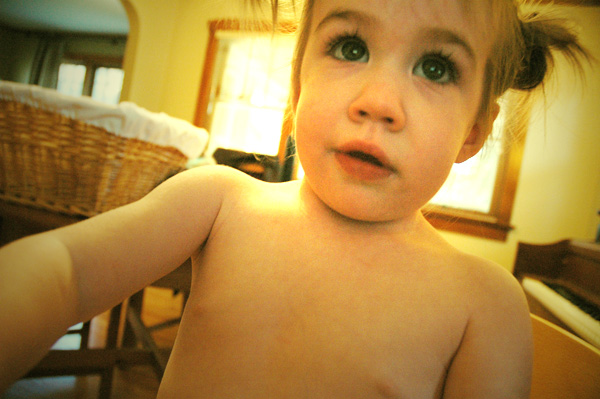 Today you turn twenty months old, and yet, you still haven’t learned how to fix Mama a hot dog. This is a total rip-off. Also, I thought I’d let you know that you’re not allowed to drive a car until you can walk. You’re cutting it pretty close, kid. This past week you started a new round of therapy with an occupational and developmental therapist, both of whom come to our house and are helping us to help you learn how to walk. They came over a few weeks ago to go over some of your developmental milestones which is just Doctor Speak for HOW CAN WE MAKE YOU FEEL THAT AS PARENTS YOU ARE TOTAL FAILURES. Everything is pretty arbitrary at your age, but when I told them you weren’t yet fixing hot dogs they knew we needed intervention FAST. As far as your emotional development, however, the tests came back saying that you’re behaving at a three-year-old level meaning you’re reacting to things and understanding things at a staggeringly advanced pace. So help me God if you start PMSing at age five. Everyone who has a daughter has told me to be prepared.

For a few months this year we were pretty worried because the system attached to your bottom wasn’t working. Mine doesn’t work, either, so don’t think it’s your fault. Let’s both blame Grandpa, and maybe he’ll feel bad enough that he’ll write us back into his will (THINK: Enough money to buy all the Teddy Grahams in the whole world). Your pediatrician said we could supplement your liquid intake with a tiny bit of mineral oil, and Joy to God in the Highest, you became what Abba would call a Super Pooper, beams are gonna blind me, or at least smoke me out of my own house. Last week, though, you suddenly stopped drinking everything, and Friday you became painfully backed up. I’m trying to see if I can make it through this entire newsletter without using the word constipation — for Baby Jesus — but how many euphemisms can I use without crossing over the line into TOTALLY INAPPROPRIATE? Clogged? Anally clamped? Corked up? Muzzled? It will be a horrifying fact of your childhood, that your mother was totally inappropriate, but I promise you now that in front of your friends I will just describe you as legendarily constipated, that when it did finally come out it was T H I S big and looked like a Russian submarine. Your father was taking a shower in preparation for your Grandma’s 75th birthday party, and I wanted to throw you immediately into the bath. A military vessel had just come out your ass and your face was a mess of tears, so I ran with you to the bathroom and stood there banging on the door with your diaper-less bum draped over my right arm. Your father, Professional Lollygagger, He Who Lollygags, Master of Puttering Around Aimlessly With No Aim, he didn’t understand the gravity of the situation. HOW HE DID NOT HEAR YOUR SCREAMING I WILL NEVER KNOW, but just as he opened the door you let loose your bladder and drown the lower half of my body with a two-minute stream of piss. I just stood there motionless, the Mother gene kicking in, knowing that if I moved the circumference of contamination would only get bigger, that your impromptu fountain might bounce off the floor and splatter the walls. By the time you were done, what seemed like hours and gallons later, I was standing in a puddle of urine and my toes and legs were eerily warm. I didn’t see the look on your face, I was too busy being peed on, but your father said you looked on the verge of unconsciousness, so relieved, so exhausted, the look people have when they pass into Heaven when they think they are going to Hell. When you aren’t defecating on your mother you’re a pretty neat kid. In fact, you’re quite enchanting and The People love you. You can speak in tongues on command, and whenever I’m asked what you’ve just said I shrug and answer, “Hell if I know, I’m just her mother. Ask the spirit she’s channeling.” You’re friendly with new people, at least after you’ve climbed my body like a monkey while playing bashful. You oddly like to share your toys (on your terms) and will spend hours figuring out how something is put together: how do things open, how do they close, can it be punctured, how loud does this go? Last week I made you this toy out of a bowl and a set of marbles and you’d spend hours dumping the marbles out of the bowl and watching them scatter in different directions across the floor. You found the sound and the mess EXHILARATING, at least until I had tired of retrieving the marbles and told you to go get them yourself. You looked at me as if I has just accused your shit of stinking. This last month has probably been the hardest in terms of parenting because GOD you don’t stop. You don’t stop demanding or whining or crawling out of view. You don’t stop complaining in the car or asking for my food or pleading to be picked up right now, this instant, did you hear me up there I WANT UP NOW. The rewards have been as proportionally magnificent though, and this is all I ever wanted, I can’t believe I’m admitting this. People used to ask me about you and I’d usually begin with, “Well, she screams a lot…” and then continue with, “I never thought it would be this hard.” Now I can’t stop gushing. I don’t wait for people to ask me about you, I tell them, “My kid already speaks a foreign language…” and go on to talk about how delightful you make my day just by reaching up to me in the morning. And then I go ahead and tell them about how you think that having someone pee on you would be totally mortifying, but when it’s your own kid, and she’s half-naked and her hair is matted to her head in perpendicular angles, you’re just so damn thankful for the memory.