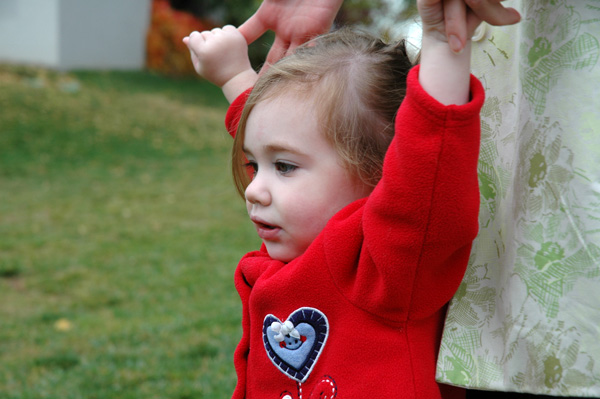 Today you turn 21 months old. To celebrate we filled a shot glass with apple juice and let you slam it back. Not really, but what I would give to be in the room when my mother reads that. It’s my way of getting back at her for teaching you how to fold your arms and be reverent while someone is praying. Speaking of the Avon World Sales Leader, she called the other morning to say that she had just listened to my message where I told her that we were going to kill you. I corrected her and said, “Not kill her, mother, give her away. Or pay someone to come get her.” I had called her the night before to curse her for ever bringing me into this world knowing that I might one day have a child of my own. I apologize now, Leta, for what your children are going to do to you. One afternoon you are going to be standing in the middle of a store and your child is going to want to push the shopping cart herself except she’s not going to be tall enough to push it by herself. And when you try to hold her high enough that she can push the shopping cart she will resist you with every muscle in her body INCLUDING THE ONE ACROSS HER FOREHEAD and in a moment of exasperation you will let her go and she will dangle like a monkey from the handle. And she will scream. That part will be the fun part and when your husband comes back from grabbing a package of paper towels you will say, “Want to see something funny? Watch this.” Have I just admitted publicly that I let my child hang from the handle of a shopping cart? Twice? While she screamed? I’m not just admitting it, I’m recommending it. That was the only fun part of that day. THE ONLY. We needed that memory to hold on to. When you realized that you weren’t tall enough to push that cart you started a series of tantrums that wouldn’t stop for over 72 hours. Tantrums thrown by a 21-month-old are a lot different than those thrown by a 20-month-old if only in the sense that the 21-month-old now understands the concept of volume. At some point in each tantrum you seem to ask yourself, “Just how loud can I scream? At what pitch will my mother’s face melt?” Your developmental therapist assures us that your tantrums are a good sign that everything is okay with you, that if you weren’t throwing tantrums we’d be worried. After she witnessed one of your tantrums, though, I asked her if she’d ever seen a more okay kid in her life. She told us that the best way to deal with these outbursts is to step back and let you get it all out, to let you express your frustration and then move on to another activity. That’s a lot easier said than done, I have to admit. My natural instinct is to drive you downtown and drop you off with a sign around your neck that says FREE OR BEST OFFER. I know that sounds harsh but even your sickeningly patient father has turned to me after certain unbearable fits and said, “If you make the sign I’ll warm up the car.” Last week your father and I made a huge mistake by encouraging you to play Sesame Street games on the computer. I say mistake because you became instantly addicted and when we took it away you got the twitches. It doesn’t help that we have more computers in our house than in the entire state of Arkansas, and every time you turn around you are bombarded with the temptation. You ask for it with, “Melmo?” And when we say that Melmo is sleeping you say, “Melmo?” And when we say not now you say, “Melmo?” And at that point your bottom lip starts quivering and I just hand over the crack pipe and light it for you. The good news is that you want Computer Melmo bad enough that you’ve started saying please. The even better news is that even though the sign for please is a circular hand motion at the top of the chest, you say please by scratching your underarms like an ape and saying, “Oh koh.” Where the hell you learned that I have no idea but keep it up and I’ll give you anything. We’ve learned that we can interrupt your tantrums with a specific episode of Sesame Street, the one where everyone gathers to sing about something being in the air today, something that makes you want to sing. When you hear the first note of that episode you race to the middle of the living room floor and start belting out words as loud and as off-key as you can sing them, SIIINGS and DAAAYS and SAAAAYS. I now can’t sleep at night because all I hear is that song on repeat with your flat and sharp vocal accompaniment, but I’m not complaining. There are worse sounds that could keep me up at night, the dry lapping of the dog’s empty nutsac for instance.

But more importantly whenever I think about you sitting on the floor singing I’m reminded that you have made me live my life differently, more slowly. I can’t pass the toy section in the grocery store without stopping, without taking the time to see if they have anything new. I can’t pass a tree whose leaves have turned red without plucking one off and sticking it in my pocket. I can no longer eat just one Lays potato chip. You have slowed me down and brought me closer to the kid I used to be. You have made me learn every word to that damn Sesame Street song, and not only do I forgive you for that I will sit in the floor and sing it with you. P.S. That part where I said I was going to give you away? They’d have to pry you from my cold, dead hands.