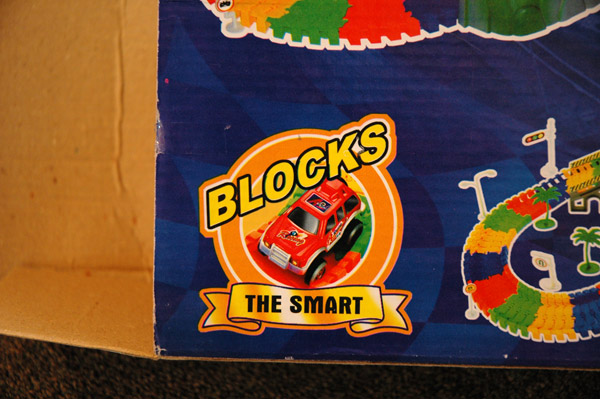 While at my mother’s cabin this weekend I watched Leta as Jon helped my step-father assemble ceiling fans and hang coat racks. They spoke a curious handyman language that sounded a bit like someone mumbling Japanese under water while my mother ran around like a wombat shouting, “Put this here! Now! WHAT ARE YOU WAITING FOR?” Periodically my step-father would look up at Jon as if to say, “Do you see what I have to live with?” As if Jon has no clue what it’s like to live with a woman whose brain has a circuit map that resembles the organization of a tumbleweed. I told my step-father that even though he doesn’t drink he and Jon should grab a couple beers and swap war stories. Then he wouldn’t feel so alone.

I had no idea what I was going to do to keep Leta occupied. When we’re with my mother I usually just point her in the direction of all the jewelry and then check up on her after an hour. The only toy at the cabin, however, was a car game called Extreme Race Car my mother had bought at a hut in the mall next to a store that sold portraits of an Anglo-Saxon Jesus with blue eyes. I thought Leta would enjoy collecting the tiny gas pumps and street signs in her hands and walking in circles on her knees, but when I opened the box we both dove for the battery powered cars. Ever since Leta began using words Jon and I have found ourselves speaking to each other in one word commands — more! some! STOP! — and when Leta and I both saw those cars a deafening, simultaneous WHOOOOOEEEEEEE! shot up and cracked the pine timbers across the roof.

Jon couldn’t finish his chores fast enough, and moments after I had painstakingly put the track and the cars and the tiny pedestrian signs back into the box he dumped them out again and all but shoved everything into his mouth. A track that had taken me almost an hour to assemble took Jon only 45 seconds and only that long because his hyperventilating got in the way. While he roared sound effects I studied the box to see if there were instructions I had missed, and that’s when I noticed that someone’s 13-year-old son who knows English because of Star Wars and “MacGyver” reruns translated the game from its original language:

Blocks, The Smart, Unlike Our Proofreader Install’s way or no way at all: A diagram of constipation: These were translated by Yoda: You know, for the children: