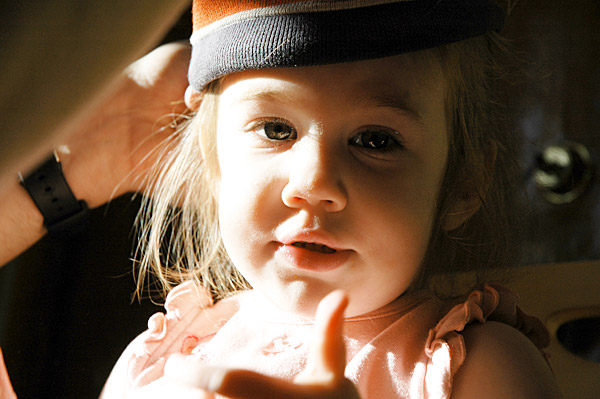 Today you turn twenty-three months old. Over the weekend we watched a few hours of home videos we’ve taken over the last couple of years, and I think you’ve finally found something you love more than Elmo: yourself. Any time you watched yourself perform something extraordinary, like a front flip in bed or putting the lens cap on the camera while I was filming, you giggled maniacally and demanded to see it, “Ah-gin! Ah-gin!” We watched you turn front flips over and over ah-gin until your father finally said, “No, we’re going to watch something else now, Leta.” Which was his diplomatic way of saying, “If I have to watch that part one more time I’m going to take a dirty fork and jab it through my neck.” Your love for yourself, though, hasn’t diminished your love for Elmo one bit. During one sequence of video you saw yourself walking around hugging Elmo to your chest and I think you thought he might be trapped in the television. You threw your body against the screen and pounded it with both of your open palms as if he were being carted away to the gas chamber. FREE ELMO! FREE ELMO! We had to fast forward through that whole sequence so you didn’t have a heart attack. You will often refer to your other toys as Elmo-this or that. Your stuffed bunny is Elmo-Bunny; your stuffed giraffe is Elmo-Raffe. You have on more than one occasion referred to me as Elmo-Mama, and while I have tolerated most of the crazy things you have thrown my way — or as you would say, COOZY things — I’m not about to let Elmo have any of the credit for bringing you into the world. Until Elmo has a hemorrhoid or can shoot an enemy target with his own breast milk you are not to mention him and me in the same sentence. Turns out that you already know the entire alphabet, and the only explanation for this is that you pay close attention to “Sesame Street,” that you are thriving and learning things despite your lazy parents. One afternoon I was in the middle of the living room floor coloring with you when I started to write your name. You looked at the letters I had written and said out loud while pointing to each one, “L-E-T-A.” Thinking that I was hearing voices in my head I wrote out my own name to see if you would recognize any other letters. Before I could even ask you what each one was you spelled out my name — from the H-E-A to the T-H-E-R — and then I frantically looked around the room to see who was playing this joke on me.

I wrote letter after letter and you identified each one. “Which one is this?”

I even tried to trick you by throwing in some numbers. “What’s this letter?”

“Someone’s feeding you the answers. I know you won’t know this one.”

Except it sounded like, “Ter-ten,” and at that point I wondered what else you knew and how long we could hide you from the government. After showing you off to your father we agreed that we would take full credit, and now when anyone asks us how you know your numbers and letters so early we say, “It’s our superior genes.” You often sing your ABC’s and stop after T because the rest of the song doesn’t interest you. I don’t blame you, after T it’s all down hill and one of the last lines of the song? Hello? “Now I know my ABC’s?” Why do you have to point that out when you just SANG THE WHOLE ALPHABET. If people would pay attention they would come to that conclusion ON THEIR OWN. A few days ago after getting you dressed for the day I asked you to walk with your father to the living room so that I could go Pee-Pee. At first you didn’t want to go, but your father finally convinced you to let me be alone, that sometimes human beings like to be by themselves when they go Pee-Pee. As you walked away I heard you sing, “L-M-N-O-Pee-Pee.” A few weeks ago you started calling me Mom. Not Mama or Mommy or Gorgeous Being of Light and Splendor, but Mom. I thought I had at least six or seven years until you got so fed up with having to call for me that you left off the second syllable of the word. When you say it you sound like you’re 15 years old and so embarrassed that we are categorized under the same species. I’m only a little bothered by this because at least you’re not calling me Heather. You frequently call your father Jon, but only after I have yelled it across the house after he has done something unacceptable like forgetting to put a new bag in the trash-can or farting as he walks past me and then crop-dusting it through the rest of the house. In our house we live by one rule: wherever you farted, you stay where it started. I don’t mind being called Mom as much as I mind how fast you are becoming a little girl. I didn’t think I was supposed to notice because I see you every day, but sometimes I wake up and you look a little taller or your cheeks are a little leaner. All of your hair fits into one rubber band at the top of your head now, and throughout the day as strands fall around your face you look like a Renaissance painting, you’re so beautiful. Sometimes I see you playing across the room by yourself and I will selfishly interrupt you and ask you if you’d like me to scratch your back. You’ll look up and say, “Scatch!” and walk over and lie belly-down across my lap so that I can scratch your back and the palms of your hands. My mom used to scratch my back just like this, and I used to worry that she would grow tired of it because I wanted her to do it so much. But now I think that she was worried about the same thing, that maybe I would get tired of it because she liked to scratch my back. So I want you to know just in case you ever get worried, I won’t ever get tired of this. You can lie in my lap whenever you need to, hopefully more often.