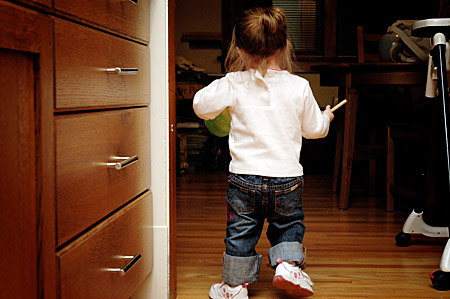 Since the beginning of October Leta has been working with a physical and developmental therapist from a state-run early intervention program. They have been coming to the house usually once a week to help foster Leta’s motor skills and language development, although Leta probably thinks of them as those nice ladies who bring over all those toys. Chuck is so in love with one of them that he routinely throws his entire body at her legs not realizing that his fur generates no friction against the wood floors and he goes flying four feet across the dining room on his back. The therapist always says that she doesn’t mind the acrobatic demonstration of love, but I imagine that Leta is horrified. Why can’t the dog just be civilized?

At the beginning of the program they gave Leta a full developmental assessment, and then we set goals as to where we wanted her to be at the end of six months. Obviously we had to work on her walking, and the physical therapist said that she wanted Leta to be able to bend over and pick toys up off the floor without having to hold onto anything for support. These were significant goals considering Leta didn’t start putting weight on her legs until she was well over a year old, a skill many babies perform during the first four months of life. We had a lot of work ahead of us, and I say us because I had a lot of late night drinking to do.

Sometime within the first month Leta met her language goal and started using 20-30 words spontaneously, and since then she’s more than doubled her vocabulary. She’s stopped throwing explosive tantrums in the morning — what was once her most ferocious time during the day — because unlike many adults she can communicate her needs. Once her needs start expanding to “Barney,” though, I’m going to shrug my shoulders and tell her, “I don’t know what you’re saying.”

This week Leta met her goal for gross motor development. It wasn’t something that just happened all of a sudden, but she’s walking around the house now like a normal little kid. She’s picking up toys off the floor without falling to her knees first, and she’s carrying books in both hands from room to room. I honestly thought I might never see her do this, and this morning while I was standing in the kitchen she walked around the corner in her pajamas. It was exactly like I had daydreamed it would be — her hair a flame of tangles around her face, her round pokey belly leading the way for the rest of her body.

This morning her developmental therapist said that we could discontinue services because of Leta’s progress. I’m not sure I can adequately state what a fucking awesome victory this is for the whole family. This news is something we’ve been waiting for since she was two months old and diagnosed with torticollis, something we had hoped for through two years of physical therapy sessions, through her first MRI, through her second MRI, through so many monumentally discouraging moments.

Thank you, Elmo-Internet, for your support through this.