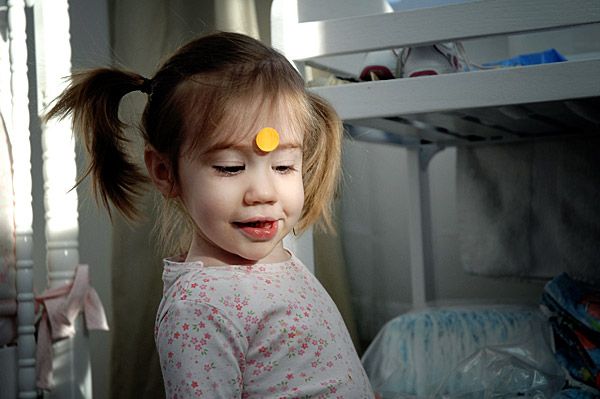 A few days ago you turned two years and one month old. People ask me all the time how long I plan to continue writing these monthly updates to you, and to tell you the truth I have no idea. When I started doing this I thought I’d just do it through your first year of life but then you continued to grow and change, strangely, as human beings sometimes do. It made sense to keep doing it because every month there were so many new things to tell you about, things you won’t remember, things I want to be able to hold over your head when you are older and need to make bail.

Sometimes I go back and read the things I wrote to you in the early months and I realize that I’ve already forgotten half of what happened, and if it weren’t for what I’ve written here I could have lost certain memories forever. These updates are as much for me as they are for you, and I’ll keep writing these as long as my memory continues to deteriorate. You can blame it on getting older, or maybe it was all that tequila I drank in my early twenties, but it definitely has something to do with the amount of UPN I watch and the space in my brain occupied by Tyra Banks forehead.

This month you have finally become enamored of walking upright and have walked circles around the house so often that there are visible tread marks in the hardwood floor. You love to yank me by the hand and say, “Walk!” to get me to walk laps with you, and one night last week we went outside and walked up and down the block for over an hour. Usually, though, when you take me by the hand for these walks we always end up in the kitchen right in front of the medicine cabinet where we keep your gummi vitamins, and you’ll pull on my arm signaling that We Have Arrived At Our Destination. “Min!” you’ll say, and even if I indicate that you’ve already had your vitamin today you continue to repeat that word — min, min, min — until I relent and let you pick out another one from the bottle. This is called Being Manipulated by a Two-Year-Old, a skill that I have mastered with the energy and ambition given to me by the Avon World Sales Leader through DNA. I want to be the best object of manipulation! And this is why we regularly hand you lollipops at bedtime.

Your father and I can’t ever get you to eat anything, ever, at all. Nothing. You won’t eat. You won’t open your mouth if we try to feed you, and when you try to feed yourself all you want to do is create art on your face or somewhere in the air in a three-foot circumference around your body. This has become so maddening that sometimes I have to leave the room when your father makes you lunch. I know that whatever we fix you will be refused and you’ll go another day without eating which means yet another day without pooping. On the rare occasion that you do eat your father and I become very still and silent, afraid that if we set in motion a series of molecules that might alter the direction of air in the room that you will change your mind. Your father immediately morphs into what he calls Satan Ventriloquist and without opening his mouth will say, “DON’T MOVE, THE FORK IS HEADED TOWARD HER MOUTH.” I keep the camera nearby so that when you do eat I can take a picture just in case it never happens again.

Recently your imagination has exploded and you love to play pretend. You often carry around Potty Elmo — one of four Elmo dolls you have, he wears a diaper and when he says that he needs to go to the bathroom you have to sit him on his potty post-haste or he sings, “OOPS! Elmo didn’t make it to the potty!” which is so annoying that when you aren’t looking I punch him in the head — and you’re constantly checking his diaper to see if he has gone Poo-Poo. One morning last week I was lying on the couch in the living room and you brought me a blanket, covered me up and said, “Night-night, Mama.” Then you disappeared around the corner only to return with Potty Elmo whom you tucked under the covers next to me. “Hug Elmo,” you commanded. So I hugged Elmo, and then you said night-night again. You kept taking Elmo back around the corner and then returning with him, each time demanding that I hug him. It was a game of Night-Night, and I made the monumental mistake of getting up in the middle of this game without running it by you first. When you saw me standing in the kitchen doorway your face contorted in horror, and after throwing your body head-first across the room you screamed, “NIIIIIIIIIIIIGHT-NIIIIIIIIIIIIGHT!” I imagined that your voice would have sounded exactly the same if you were trying to tell us that your face was on fire.

Your father and I have been making a transition over the past few months, trying to figure out the best way to get things done and who has what responsibility when it comes to you and to the litany of chores required to keep the house in order. At first I had a hard time adjusting because I had a system that I used to make sure the house ran smoothly, and once your father came home his big body was like a huge wrench being thrown into my machinery. When he took over some of the chores I didn’t like the way he did them, he was too slow, or he didn’t wipe the counters in the right direction, and it’s taken me a long time to come to terms with the fact that it’s okay if he doesn’t do things my way even though my way is the right way, the superior way.

In the last month that transition has finally given way to a newer way of life. He’s taken over almost all of the chores and he’s even pretty good at them even though he did put my sports bra in the dryer and during one of my workouts I lost feeling in both legs because my circulation was being cut off at my boobs. The best part, though, is his relationship with you and how you’ve responded to all this time he’s spent with you. You often call for him when you wake up in the morning or call out his name when you fall. You follow him around the house and want him to sit in your floor and read you books. You often cry when he leaves the room.

When we first decided to make this change in our lives I got a lot of hatemail from people who disagreed with the decision, and that hatemail continued for several months, continues even now. But I can honestly say that what has happened between you and your father — the way you look at him now, the way you crawl up into his lap and touch his face, that one time when he was crying and you ran to him and wrapped your arms around his neck, that you two have been able to have this time together — that alone is worth having to endure every bad thing that has been said about me.