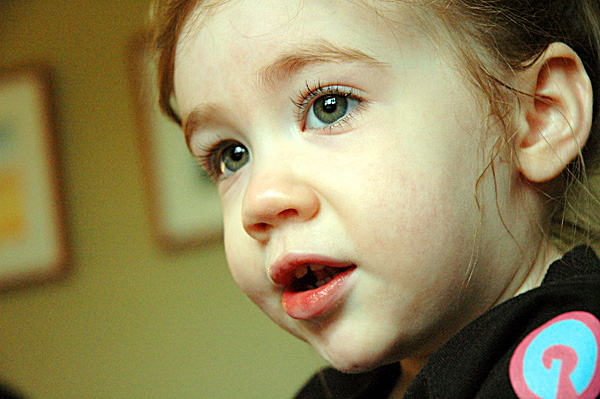 Yesterday you turned twenty-six months old. I would characterize the last month of your life as That One Time You Refused To Eat Anything, with [One Time] being a variable X where X = [Every Single Day]. We have come to realize that food is an area in your life where you are trying to exercise control and the best way to deal with this is to make it a non-issue. So we give you options, and one of those options is always the choice of not eating. If you don’t want to eat then I’m not going to make you eat although I may grab a fork and jab it into the flesh on the back of my hand. One afternoon last week you had a single chicken nugget for lunch and then refused to put anything else into your mouth. And then you didn’t eat anything for dinner. And then you didn’t eat anything for breakfast the next morning. And then you didn’t eat anything for lunch that afternoon. We made you food for each of those meals that you refused to eat, reasonable meals that months ago you would have eaten ravenously, like pizza and Fruit Loops. By dinner you had gone almost 30 hours without eating, so your father and I broke out an old standby and spread chocolate on saltine crackers. At first you recoiled at the sight of them, as if food was for the weak, for people who require calories, people who can’t change the direction of the rotation of the Earth through concentration alone. You stared at them for five minutes, sighed, and then finally took a reluctant bite. If you had to eat this cracker covered in chocolate then okay, fine, but we better not expect you to enjoy it.

That was five days ago. Since then you have had chocolate-covered crackers for every meal. That’s 15 consecutive meals of chocolate-covered crackers. Before I became a parent I would have looked at this scenario and turned my nose up in disgust. But now… now? Wow. Now I look back at the judgmental person I was and I want someone to crack her skull with a car jack and then stuff the body in a chimney. In other news of our degenerate parenting, this month has also seen the return of television. You used to be a huge fan of “Sesame Street” but once you learned to walk you had no use for that nonsense, and this made me terribly sad for a few reasons. One, we all stopped sitting still, which is fine for you, you’re two and you have the energy. But I’m 30 and my body is ravaged from having handed it over to Satan. Two, I really started to worry that we were missing out on what was going down on the Street. I imagined that while you and I were running around the house checking all your stuffed animals for poopy diapers that other kids were watching as Telly Monster discovered he had a venereal disease. Or that Zoe was considering a boob job. You never know. But you can always hope.

So your father and I worked hard and now you will momentarily sit still in front of Monsters Inc. or “Blue’s Clues.” You ask for Mon-eek or Coos-coos, and your father and I then have maybe 15 minutes tops to use the bathroom or lie in the floor and twitch before you realize that there is perhaps something in the house that hasn’t had its diaper checked for poop recently, and it’s off to the races again. Your father and I are not easily deterred, though, and last week while cleaning out the car your father brought the car seat into the house for a few hours. This BLEW YOUR MIND, and so we used that novelty to our advantage. For several hours that day you requested that we buckle you into that seat right in the middle of the living room floor. No problem! How about a movie? And since you’re buckled in, why not get comfortable? Here’s your blanket and some yummy snacks. No need to move! EVER. A few weeks ago your father and I went to Texas to a conference and we left you with Pa-Paw. We delivered you to him in working order, but when he returned you to us you were broken. My father broke you. For two years we have cultivated a morning routine with you, one in which we wake up slowly while lounging in bed, watching the morning news, and eating dry cereal. We worked hard for two years to get you used to that pace, but the morning after we got back from Texas you wanted to start the day immediately. It was still dark outside, and even though I hadn’t yet had coffee you wanted to start checking Elmo for a poopy diaper NOW. I wondered what my dad had done to you and then realized he probably had you up at the crack of dawn scrubbing the grout in the bathroom tile or vacuuming the floor mats in his car. We have slowly retrained you to start the day more softly, but it hasn’t been easy. Most days are tough and you want to get going, and even before your father and I have had a chance to realize what day it is you’re screaming because it’s time to eat again. NOT AGAIN! BUT YOU ALREADY ATE SOMETHING THIS YEAR. This morning, however, your father brought you into bed with us when you woke up, and you snuggled right up into my neck. This was strange because I am used to the militaristic duck-pecking of your morning demands. Your father realized the significance of the moment, too, and climbed into bed right next to you, his hand on your back, the three of us an Armstrong sandwich. We all lay there for an hour dozing and cuddling. As you started to wake up I reached over and started scratching your forearm, and then you stuck your arm straight in the air as an indication that I should scratch the parts of your arm that I would otherwise be unable to access, kind of like what Chuck does when I reach down to rub his belly and he falls over on his side with a thud. I continued scratching your arm for a few minutes until you grabbed my hand and stopped me, forcing my arm back against my chest. “Scratch Mama,” you said and then ran your fingers up and down my arm. It paralyzed me, the way you gave back to me, and I had a hard time breathing because that’s the type of thing you spend your whole life hoping for.