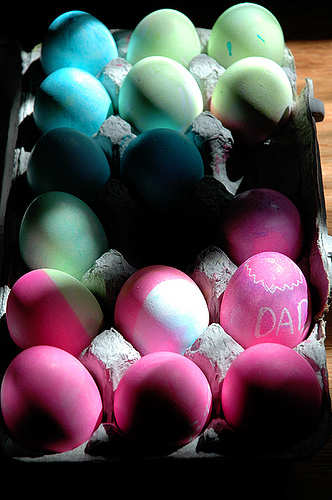 Yesterday morning when I mentioned to Leta that the Easter Bunny had brought her a basket full of goodies she presented me with a blank face. I don’t know what I was expecting because we hadn’t ever talked about it before and she didn’t know that she was supposed to be excited. I could have said, “GAH GAH GAH GAH GAH,” and it would have meant the same thing to her: sentence does not contain any instances of the words “Elmo” or “cookie” so I can stop paying attention now.

We didn’t prepare her for the event for a few reasons. One, we are lazy. Two, how do you explain the Easter Bunny to a two-year-old? Look, Sweetie, this giant bunny wearing a bow-tie is going to break into the house while you’re sleeping because Jesus died for your sins. Three, on the off chance that she did catch on to the whole concept the last thing I wanted to do was listen to her ask about the Easter Bunny every four seconds. Already we’ve had to start spelling words in front of her because certain ones can trigger dangerous fits of hyperventilation, words like gummy bear and Grandmommy. I made a huge mistake last week when I told her that we were going to Grandmommy’s house later that afternoon because she stopped breathing air after she heard GRANDMOMMY and didn’t hear the rest of the sentence. The disappointment over the fact that Grandmommy was in fact not in our house that very instant was such that I had to talk her out of throwing her body into traffic.

Because we are no longer a very religious family we didn’t attend any church services, but we did celebrate the resurrection of our Lord and Savior by dyeing eggs. Nothing says “Jesus is risen!” like a festive hard-boiled egg. This is an activity that until yesterday I had never taken part of, and I used to think my parents were ogres for having denied us that experience. Now I know they were just smart. At one point Leta had her left foot submerged in the bowl of green dye, and in each hand she held an egg that she would seconds later throw in a straight line at the ground. It was a picture of The Armstrongs at our finest: both Jon and I still in our pajamas, hair pointing in every direction except the right one, our child standing ankle-deep in a bowl of green vinegar with shards of egg shell tossed about like glitter. I can laugh about it now but at the time I was a wreck because I had a mental tally going of how many surfaces she could destroy with that dye. Jon kept telling me to relax because this mess was the essence of the activity, because we were creating memories with our child. And I totally see his point, which is why next year I think we should dye eggs while we’re drunk and naked.