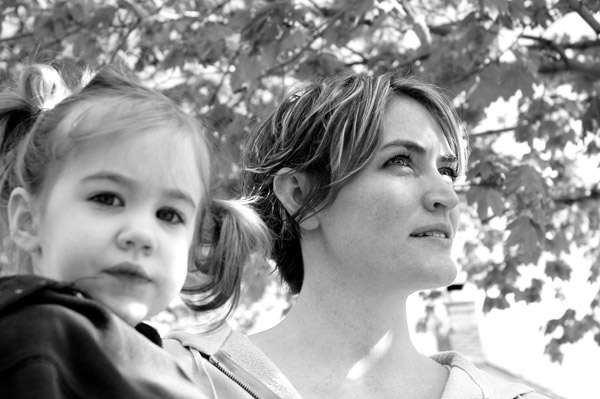 Yesterday you turned twenty-seven months old. I cannot even begin to tell you what an amazing month this has been, by far one of my favorites. It’s been so good that I haven’t wanted it to end much like those days when you are in such a great mood we have a hard time putting you to bed, or more accurately, are afraid to put you to bed. What if you wake up the next day and that great mood was just a fluke, or even worse never happens again? I’m not a very superstitious person — unless “superstitious” is just a euphemism for “obsessive-compulsive,” then I am superstitious enough to be hospitalized — but I suffer from a crippling phobia that if I ever talk about your good mood I’m going to ruin it, that Karma has somehow let your good mood slip right by it, and here I am calling attention to that mistake. In my head the idea of discussing your good mood out loud is the equivalent of painting a red target on my head so that The Universe knows exactly where to stomp with its size-64 black combat boot. I’m not sure what has made this last month so special, but I find myself gushing to everyone I know that this age has so far been the best one. This is something I have seen other parents do, talk about the age they liked best, but until now I haven’t been able to jump in with much enthusiasm. Some like it best when the baby is still very small and chubby and edible, others like it when they are old enough to pay their own rent, preferably in another city. And it’s not that I haven’t had fun until now, because I have, it’s just that you are right now a perfect blend of baby and person, not too much of either. You’re old enough now that you are more of a companion than immobile bundle of digestive processes but still enough of a baby that we can throw you around and wrestle, and your bones will pop right back into place. You’ve also got this amazing sense of humor and somehow have the maturity to know how to use it. Often we will be sitting at the table having a meal, or I guess I should say your father and I will be eating something while you sit in your chair counting the chicken nuggets you refuse to eat, and I will look up at you only to see that you have your eyes crossed again. When I was a kid there was this urban legend that if you crossed your eyes and someone came along and hit you in the back of the head while you were doing it your eyes would stay crossed like that forever. I have never stopped believing in that possibility, so when you cross your eyes I TOTALLY FREAK OUT, which you might have noticed already is something I do about as frequently as I breathe, and this makes you very happy. When I ask you kindly to uncross your eyes you giggle and say, “I’m funny, huh?” Yes, you are so funny that I might start drinking before noon. One of your new habits is to mimic our everyday activities like sweeping the floor and sticking the keys into the lock on the front door. When we come home from running an errand and I unlock the door I have to hand you the keys so you can pretend to do the same. You’ll often mumble exasperated nonsense to yourself in the same tone that I do when I open the door, like, “I can’t believe I just paid seven dollars for a box of tampons.” One night last week while you and I were playing with a deck of cards you suddenly hopped up and ran into the kitchen with the seven of hearts. I followed you in to see what you were up to, and you had gone over to our side-by-side refrigerator to run the playing card through the slot between the doors. LIKE A CREDIT CARD. Then you handed it back to me and asked for another card. Why? Was that one rejected? Can you try one more time because I don’t have my checkbook on me. This month we bought you a small table and chairs perfect for someone your size to use as an art table. It is your favorite place in the house now, and you often grab my finger with your small hand to lead me to it. “Color?” you’ll ask, except it sounds like CUH-YAH, and I’ll plop down into the too small chair to join you in scribbling with the washable markers. Your father was adamant when we bought art supplies that we would encourage you to use them however you liked as long as you didn’t destroy furniture. He wanted you to be able to use as much paper as you liked and also as much ink as your masterpieces required because he wasn’t given that type of support when he was fostering his creative side. So I agreed, and even though the practical side of me sometimes flinches when you go through an entire tablet of paper in one coloring session, I mostly rejoice that you’re showing so much interest in creating something. So when you started coloring your arms I applauded you. You were just expanding your canvas, right? But your father walked in and was all WHY ARE YOU LETTING HER DO THAT? And I was all BUT YOU SAID TO ENCOURAGE THE ARTIST IN HER. And he was all YES, BUT THAT WAS BEFORE I REALIZED HER ART WOULD REQUIRE REALLY TEDIOUS CLEAN-UP, AND NOW I MUST GO GRAPPLE WITH THE HORRIFYING REALIZATION THAT I HAVE BECOME MY FATHER. Last month my cousin had his first child, a little girl, your second cousin, and a few weeks later when I called to see how he was doing he talked about what a surreal experience it was to have this new person in their home. He said that when they were still in the hospital he felt the usual pride a father does about a newborn daughter, that she was the most beautiful baby in the world. But then, he said, when he came home he realized that things were so crazy in the hospital that his feeling then about her beauty was totally subjective, that he thought she was the most beautiful baby only because she was his daughter. Now that they were home and he felt clear-headed he couldn’t believe just how pretty she was, and he felt that he could make an objective, scientific assessment that she was, indeed, the most beautiful baby in the world. And he said all of this to me with the seriousness and authority of an expert.

I laughed quite a bit about that conversation because that’s sort of a cliché about parents. We all believe that our children are the most beautiful children in the world. But the thing is, what no one really talks about is the fact that we all really believe it. I, too, believe it, that you are the most beautiful child in the world, and as absurd as my cousin was being about his own baby, I feel the exact same way. Even though I know it is a totally subjective judgment, I feel it so strongly, so completely that even the most rational part of me can’t help but feel that it’s true. You are the most wonderful, beautiful person in the world.