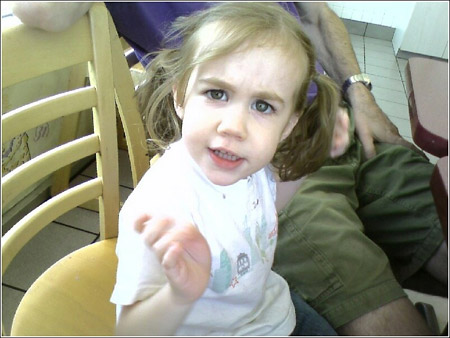 Jon scored one of his hugest victories yet in our marriage recently when he successfully introduced Leta to black licorice, Grossest Substance on Earth. I guess I should say re-introduced, because it was my step-father who initially offered her a piece of Black Death a little over a month ago. I had hoped that maybe that instance was just a fluke, that maybe Leta had gone temporarily unconscious and had not willingly subjected her tiny, delicate body to something so disgusting, something that could wipe an entire town off a map when eaten and then given a resurrection through someone’s rotten, stinking exhaled breath.

Her tolerance of black licorice should clear up any doubt you might have had over whether or not this kid is the child of her father — and let’s be honest here, haven’t you scratched your head once or twice when looking at this face and asked yourself, “I wonder what Heather’s mailman looks like?”

There are only three tastes in this world that I cannot abide: black licorice, anise, and fennel, tastes I find less desirable than yanking out my tongue with a rope tied to the back of a pick-up truck. Both my step-father and Jon have tried to convince me that there are various flavors I should try, a Swedish brand here, or a Danish brand there, that I’m bound to find one that will win me over. Maybe I’m being a little stubborn, but I equate the idea of sampling licorice to a study on the variations of YUCK. It’s like asking, which one of these brands makes you want to die from a piano falling on your head rather than because a shark ate both your legs off?

No one in my family likes licorice, especially not my father who has such a strong gag reflex that it can be triggered if he’s looking at a picture of someone who is thinking about throwing up. We’re not fans of strong smells, and growing up he wouldn’t allow watermelon-flavored Bubble Yum bubble gum in the house, which if you remember correctly was only the most explosive taste imaginable, especially to a kid who subsisted on nothing but peanut butter and banana sandwiches. I remember sneaking over to my friend’s house to chew it, to behold its rectangular, pink figure in my trembling hands, to feel its dangerously electrifying juices set my tongue on fire. And then I would wash out my mouth, brush my teeth and hope that when I went home my father wouldn’t be able to smell the sin on my clothes. If you look at the trajectory of my life this seems to suggest that watermelon gum is the gateway drug to gay porn. He was right all along.

Take into account that Leta will sometimes refuse to eat a chocolate pop tart — a food that is both chocolate and pop tart AT THE SAME TIME — and yet, she will agree to a piece of licorice each time it is offered. The upside is that the licorice has cured every problem she ever had in terms of Going Number Two, and because those diapers emanate a distinct smell I can hand her over to Jon when they happen and say, “You caused this one.” I will not change a licorice poop, that is an agreement we have reached, an agreement that has saved our marriage. Because I cannot guarantee that while I’m wiping her butt I won’t puke and then choke on that puke and die and then fall over. People cite that exact scenario in divorce papers all the time.

One of the many, many, endless and uncountable downsides is Leta’s breath which used to be the color of fairy wings and was so sweet it could cure broken hearts. Now it is a visible black smoke that curls into forked tongues and seethes with the voices of screaming demons. I cannot withhold kisses or hugs from her like I can from Jon because she’s just an innocent pawn in all of this, and a true test of parenthood has been willing myself to endure the pain of having my eyebrows roasted off my forehead when, after stuffing her mouth full of licorice, she crawls up into my lap and says HEEEEEEELLLLLOOOOOOO. I just pick up the flesh that melts off my face and stick it back on, pretending that it happens all the time.