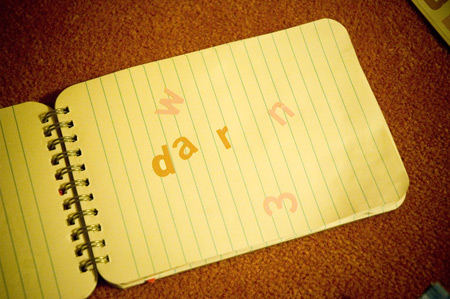 Jon and I flew with Leta to San Francisco this afternoon. I’m writing this from our hotel room in Cole Valley while Jon drives back to the airport to pick up a bag we left circling on the baggage carousel. The bag containing every single thing we packed for Leta, including clothes, diapers, and the books we read her before bed. Because it is already three hours after her normal bed time, I went ahead and put her to sleep in the red t-shirt she wore all day. It has dried licorice-drool stains covering the shoulder, and on the plane I used one of the sleeves to wipe her nose. In about an hour she will wake up screaming because she is stuck to the mattress.

In her crib right now are the following:

She was a little uneasy when I “closed the lights” so I sat down next to the crib and told her that tomorrow we would go to a park and a restaurant and maybe even a Shoe Pavilion IF SHE WAS LUCKY. She perked up and said, “And have water in a cup? A big one? Blue? With ice?” As if a drink of cold water in a blue cup was a trip to Disneyland. I told her you bet.

Jon has work to do for a freelance client this week here in the city, and instead of flying back directly after his meetings we’re going to stick around for a few more days and see friends. Oddly, I didn’t have a heart attack when considering this trip, although that could happen any minute as I get notoriously anxious whenever we vary from Leta’s schedule. Jon is steeling himself for the moment my skull splits open to reveal the larvae of Satan.

I told him it will happen when we sit down to eat at a nice restaurant and Leta starts banging her forehead on the table because they don’t serve pop tarts. This is not a possibility, it is an inevitability, and one of the biggest reasons we don’t ever unchain her from the water heater in the basement.

To keep her occupied on the plane I packed $20 worth of crap that I’d bought at a dollar store: stickers, ballpoint pens, magnets, and poker chips. She could not have been a better passenger, and for over an hour we decorated pieces of paper with stickers in the shapes of cars and planes and boats. We also played with alphabet stickers, and on a day that I thought would be one of the hardest of parenthood, she instead gave me reason to laugh:

This treasure will be going up in a frame above the piano when we get home. Right between a family portrait and a picture of Chuck balancing a crockpot on his head.