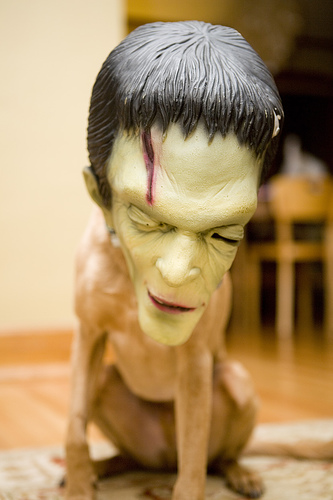 For a few weeks I tried to prepare Leta for Halloween, often asking her what she wanted to be, and she always answered, “Leta!” This makes perfect sense because we’re always playing this game where I ask her if she’s an elephant or a lion or a zebra, and she invariably responds, “NO! I’m a Leta!” in a tone that suggests that she is concerned about whether or not I know the difference between a feral animal that cannot walk upright and my own daughter, she’s only two and she can make the distinction. Sometimes I wonder if when I walk out of the room she rolls her eyes and muses to herself that, God, parents are SO MUCH WORK.

She didn’t seem to show much interest in the holiday, so we made a decision for her concerning her costume and ordered it online several weeks ago to make sure it would be here in time. We even had Jon’s mother take the bottom of it up several inches because when it arrived we realized that when it said WILL FIT CHILDREN AGES 2-5 it meant NEVER BUY CLOTHING FROM AN ONLINE STORE WHOSE NAME SOUNDS LIKE BOOGER, DUMBASS, LET THIS BE A LESSON. Why I thought a costume that is supposed to fit a 5-year-old would ever fit my very tiny 2-year-old, I’m not sure, maybe because there is no room left in my brain for actual thinking as it is filled to overflowing with the names and hometowns of every person who has ever starred on The Real World. And all that memorization has come in handy a total of zero times while watching Jeopardy!.

A few nights ago Leta came down with a runny nose that turned into a two-day fever, and a couple hours before dark last night Jon and I both decided that we couldn’t let her go out into the freezing night feeling like she did. Plus, every time I asked her if she wanted to go trick-or-treating, she would moan and mumble an almost incoherent sentence about staying in bed and watching Sesame Street. Which meant that I would have to stay in bed and watch Sesame Street, and when faced with a decision between doing that and walking around the neighborhood in 30 degree weather with a bunch of kids who are high on sugar, let’s just say that I was a little worried that the other parents who live on our street would find out about my good fortune and set fire to our lawn.

Fortunately we attended a family party on Sunday night and were able to snap a few shots of Leta in costume:

She is dressed here as Princess Leia, except she refused to wear the wig that shipped with the costume, so we improvised and styled her hair like we do every other day of the year.

And whenever someone asked her what she had dressed up as, she said, “Leta.” Close enough.

I had bought a really cheap black cape and Darth Vader mask to wear when I took her around the neighborhood, and so instead of letting that go to waste I forced it on the one creature who would capture the spirit of that intimidating character perfectly: Even better, though, was the costume we ordered for Chuck along with the one we got for Leta. I do believe that if you squint and listen closely, you can hear the swampy sounds of Dagobah in the scenery of these photos, and nearby a lonely X-wing ship bubbles underneath the surface of the planet’s murky waters: And finally, because Leta’s costume didn’t get nearly enough screen time to warrant its outrageous price tag, I present Former Congressman Princess Leia, fitting because his attitude is just as feisty as hers and he looks just as dazzling in a bikini.