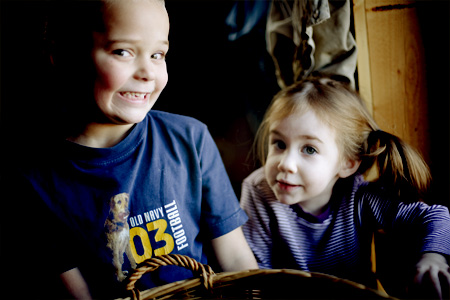 Yesterday you turned thirty-four months old. In the last few weeks you have forged a remarkable relationship with your five-year-old twin cousins, my sister’s youngest children, Noah and Joshua. I say remarkable because the possibility of you getting along with the two of them seemed almost as unlikely as my sister and I ever sharing clothes — I’d rather not have my shirt visible from the International Space Station, and she’d rather look like a woman than a pasty eighth-grade boy who has to smell his socks to determine whether or not they are clean enough to wear. Fair enough. Noah and Joshua are two of the most physically destructive human beings I’ve ever witnessed outside of fictional stories about cannibalism. They are rowdy and rough and like to smash things with their faces, and because you are none of those things your father and I were worried that we might need to talk to my sister and make sure she didn’t let them throw you off tall furniture or stuff you into a box and drop-kick you from the roof of their minivan.

But you transform them when you play with them, and they become these gentle, delicate creatures who want to show you the world. They argue over who gets to play with you next, often shoving the other one out of the way to be the one who gets to hold your hand. While we vacationed with my family over the recent Thanksgiving holiday, you spent almost every moment with those two, jumping on the bed or playing with flashlights or making tents. We thought you might be intimidated by their size and willingness to sacrifice their bodies to determine whether or not a surface can be dented, but just the opposite was true, and for three days I watched you bark orders at them like a heartless drill sergeant: jump! get down! get me that! bring me this! stop crying! I think it’s pretty clear that one day you are going to sell more Avon products than anyone else in the world.

This month your fascination with purses has turned into a full-blown obsession, and sometimes when we leave the house you have to bring three or four of them with you, one around your neck, two hung over your right shoulder, one clutched in your hand. You also like to sleep with them, but that is not just limited to your purses, no. If I were to walk into your room right now and take a look inside your crib I’d find seven babies (two who make terrifying noises), three Elmos (one who uses the potty), a Dr. Seuss book, a Dora book, four purses, a large pink ball, and a basket of bracelets. There is barely enough room for you to even sit upright in there. I decided long ago that I was not going to fight this battle only because I don’t want to have to go rummaging around in the dark looking for a scary plastic baby when you wake up in the middle of the night and it’s not tucked under your arm. So I make sure that anything you have ever asked to sleep with is within your short reach, although your father drew the line one time at a set of steak knives. And you’re also not allowed to sleep with your grenade.

I have noticed this month that you are not at all fond of wearing coats, and either you are learning this from watching me or my DNA is finally kicking in. This worries me because I think I’m going to have to start wearing winter clothing to set a good example for you, and sometimes the thought of wearing a coat is enough to make me stay inside. For a whole week. Coats and mittens and scarves make me claustrophobic, and usually I don’t wear them because modern cars? They come with heaters. And since your father insists on wearing a winter coat inside the house, even in summer, I always send him out to warm the car up for me before we go anywhere. This arrangement might not work for other couples, but it works for us because I am stubborn and unwilling to negotiate. Also, in return I offer to have sex more than once a year.

But most of the time you don’t even like to wear pants, which is only a problem when we aren’t sitting on our bed watching Dora the Explorer. And I’m embarrassed to admit this, but the ratio of time spent on the bed watching Dora to time spent doing something else would break most calculators. A few weeks ago your father and I traded our queen size bed for my father’s larger king size bed, one so massive it has its own area code, and in addition to saving our marriage, it has become your favorite place on Earth. There are times when we cannot even pry you off of it, and to be honest, we usually don’t want to. One of my favorite memories of your childhood will be the hours and hours we have spent as a family on this bed, your father and I sitting close together watching you perform somersaults or read books or sing along to Dora. Sadly, I also won’t be able to forget just how much Dora annoys me, and how at night when I’m trying to go to sleep I can’t get her chipper voice to stop playing over and over in my head, how just once I wish Quentin Tarantino were a guest director, and in the middle of the journey over the strawberry mountain, through the chocolate lake to Coney Island, a Deadly Viper Assassination Squad would pop out of the big blue bush and gun Dora down. Because then? Then there would be so much really useful learning.

I don’t know if you’ve realized this yet, but I’ve made it through a whole newsletter without talking about your eating habits. Not because they’ve improved at all, but because your unwillingness to eat normally has become such a part of our routine that I don’t even notice anymore. In fact, the only thing I can remember from the last month concerning your eating is something I’m glad I will have a memory of. Last night after you ate a few crackers with peanut butter, your father fixed you a small bowl of ice cream, and when he set it in front of you, you glanced over it and then looked at me with very worried eyes. “Fix it, Mama,” you said. I didn’t know immediately what you were talking about, but when I looked at the ice cream sitting in perfectly round scoops in your bowl I instinctively took your spoon and began mushing it into a soft ice cream soup. And then I remembered for the first time in years, maybe a decade, that my father used to do the exact same thing for me. Ice cream tasted better after he had mushed it. I sat there for a second and smiled to myself in the warmth of that memory, and then later made a very important phone call to my father. I told him that I know he sometimes feels like he could have done better with me, but that he should know he taught me many useful things that have made my life better. I hope to do the same for you.