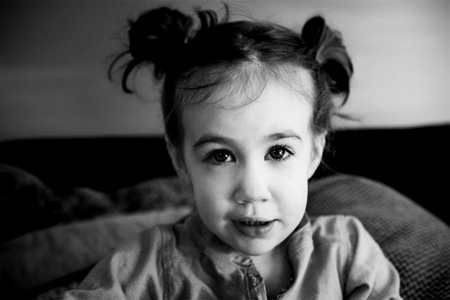 Yesterday you turned thirty-five months old. Mostly good news to report this month, and I could spend the next seventeen paragraphs singing opera about how you’ve suddenly started eating food. There was of course the occasional lunch or dinner you wouldn’t eat, and also that one time you threw up bean-coated twizzlers — your father and I are still trying to figure that one out, could have been the gum or maybe your body went into shock because it had been so long since it had seen any food that it forgot what it was supposed to do with it — but for most of the month you’ve been really good about eating meals, good meals, meals that come in flavors other than Berry Xtreme. Maybe you’ve hit a growth spurt and this behavior will stop tomorrow morning, but it was really fun while it lasted. If it continues then I’m going to take every bit of credit for it and tell people that you started eating because you couldn’t resist my homemade frozen pizza. That I bought on sale.

Recently your father and I have discovered that we can resurrect old toys that you have long grown tired of by bringing them into our bed. Something about seeing them in that new landscape makes your head spin around, and the first time it happened we thought that the incongruity of it was going to short circuit your brain. You were wanting your father to come into your room and play blocks, but we were watching something on the news, and because we were too lazy to pause the television he brought the blocks into our room and put them on the bed. You watched this happen, your head following him out of the room and then back in, like the ball in a tennis game, and when he called you onto the bed you looked around to make sure he was talking to you. Like, wait a minute. We’re going to play blocks ON? THE? BED? WE CAN DO THAT? IS THAT EVEN LEGAL? We had to convince you that this was perfectly okay, and once you climbed up and surveyed their scattered shapes across the mattress it was like you were seeing color for the first time. BLOCKS! ON THE BED! Who knew that life on this side of the womb would be this good?

Now you play with all your toys on our bed, and every day sees a mass migration of plastic out of your room into ours. Purses and dolls and puzzles and every single book you own. You once asked to ride your tiny plastic bike on the bed, and although we did draw the line at that urban adventure we do often let you drag up your new Elmo chair, a giant red throne that is twice your size. It has shared space with you in your bed on more than one night, has taken rides with us to the grocery store, has repeatedly been denied entry into the bathtub with you. Sometimes we put that chair up on the couch and you will sit in it between us while we all three read books, your father and I unable to see each other through the enormous red wall. I like to think that this is preparing us for the obnoxious things you will later bring into our lives that we will have to accept because you love them so dearly: boy bands who end plural words with a Z, poorly designed magazines that have entire sections devoted to embarrassing stories about clogging the toilet at a boyfriend’s house, peanut butter and ketchup sandwiches.

Your Elmo chair was a Christmas gift from my father, one of many gifts you got from all over the family. This year Christmas morning made more sense to you because you have been given many presents in the last several months, most of them from my mother who cannot pass up an opportunity to show you how fulfilling a life full of jewelry can be. I think she may feel that she did something wrong with me, because somehow the daughter of the Avon World Sales Leader doesn’t regularly wear pearls. And that she wants to right that wrong with you. She’s doing a hell of a job, too, because you often wear more jewelry than I do. And when we’re out together I sometimes think people are wondering how in the world you ever let your mother leave the house looking like that. And you’re all, yeah, I know, we’re hoping this is just a phase.

Sadly you have become a convert to Barney over the last couple weeks and are often heard singing that “I love you, You love me” song. It’s not really the purple dinosaur who bothers me so much as it is the kids on the show who seem way too excited to be on camera, like this show is their ticket to a lengthy and fulfilling career in Hollywood, or that it will at least get them a meeting with Jerry Bruckheimer. And I’m sorry, but there is no way that they would be so happy about sharing their toys that they’d hold hands and sing about it. It would be more fun to watch if they’d just kick each other in the shins or throw themselves face first on the concrete. And I have to be honest with you, if I ever told you to share your toy with a friend and you started skipping and talking in a really high-pitched tone about how much more super-dee-dooperly fun it is to give than to it is to receive, I’d have to ground you. For making me throw up.

One other thing you’ve suddenly started doing is this fake laugh that turns into a real laugh that turns into hysterical laughter. I have no idea where you learned it, but out of nowhere you’ll start making this really low stuttering noise in the back of your throat that sounds very much like a car that won’t start. And then pretty soon you’re laughing so hard that your entire body is moving up and down with your diaphragm. The sound is spectacular, a really meaty laugh, and without fail it always makes us crack up. Last night while we were giving you a bath your father kept rolling his eyes and asking who tooted, and I didn’t own up to it because it wasn’t me. You kept shaking your head no until a giant bubble slipped out from underneath you and exploded so violently on the surface that it splashed the walls. You immediately looked at us like, um, that wasn’t me either. And then all three of us were laughing so hard that the walls seemed to be trembling under the echoes. Later on in your life, Leta, some very grumpy people are going to try to tell you that you’re not supposed to laugh at such crude things, which is really very sad because it’s moments exactly like this one that I think you’ll look back on and smile the most about when you think about what it was like growing up in this house, the three of us laughing in chorus. And whether it be over a toot in the bathtub or because I’ve knocked my forehead into the door again, it doesn’t matter because the noise is the same, and that noise will always hold us together.