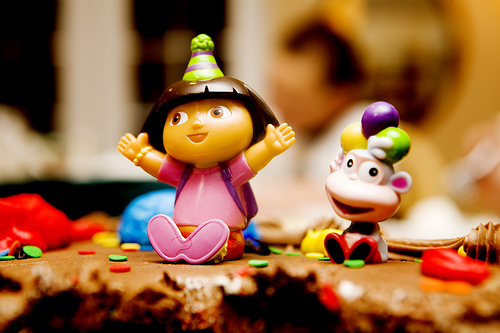 My sister, September, turned 37 years old yesterday, and over the weekend we celebrated her birthday and Leta’s upcoming birthday at my mom’s house with my side of the family. I was in charge of the cake, which says a lot about my family, that they are no longer afraid of my evil liberal germs, that they’d be willing to eat a cake made with my dirty, dirty hands. I just had to promise my mom that I wouldn’t cook it in the shape of an embryonic stem cell. Fair enough. Good thing she didn’t say anything about spitting into the batter.

So Jon and I ran up to our grocery store to buy some icing and a Dora the Horror Explorer cake decorating kit: And because I didn’t think my sister would want to be confronted with the flame of 37 blazing candles we instead bought those single candles that are molded into the shapes of numbers: a number 3 for Leta, and a 2 and 9 for my sister, because, I don’t know, that seemed like the right thing to do. I realized three seconds after we bought those numbers that there probably isn’t anything more patronizing than thinking someone is insecure about her age, and being all, HA HA! You’re 37? YOU DON’T LOOK THAT OLD. When she probably hadn’t even thought twice about her age until I made a point of suggesting that she should. But I forgive myself because she’s the one who inherited the large boobs, and the fact that I am younger than she is helps to balance out that injustice. Leta’s gifts included Sesame Street coloring books, a wooden clock from my father and step-mother, and two more Dora books, all of which she took to bed with her that night: This is how you know Leta likes something, she requests to sleep with it, and when we come to get her in the morning she is usually arranging all the inventory into straight, even rows. With the addition of the two new Dora books, Leta’s Dora library now consists of nine separate tomes, all of which she calls the Dora New Book. And when she asks for the Dora New Book she has a very specific one in mind, and if you offer her the wrong Dora New Book, she will specify, NOT THAT DORA NEW BOOK, which always clears things up.

Yesterday afternoon when we put her down for a nap I leaned all nine Dora books up against the wall so that she would have room to sleep, and five minutes later she started screaming I’M OKAY! I’M OKAY! I’M OKAY! She continued chanting this for over 15 minutes until Jon finally went in to check up on her and found that four of the books had tipped over on her back. And she just lay there paralyzed underneath them, motionless, calling out to let us know that she was okay, that worse things have happened and she was trying hard to move on.

Here is Leta reluctantly blowing out her candle, annoyed that she has to participate in this and can’t right this second be reading a Dora New Book, what kind of celebration is this?