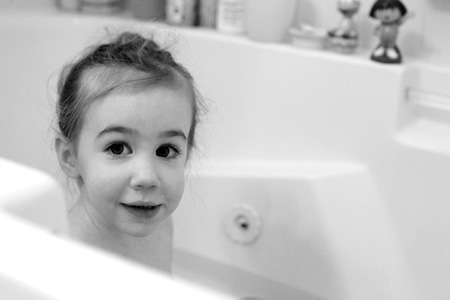 Over the weekend you turned three years old. Happy Birthday! We had been telling you for a few weeks that your birthday was coming soon, and on Saturday morning when you woke up I told you that it was finally here, that three years ago you came screaming into this world as CNN Headline news looped a clip of Janet Jackson’s exposed breast on a television set hanging from the wall. I then asked if you remembered how old you were, and you said, “Three, huh?” And when I smiled you added rather blankly, “I think that’s pretty good. Three.” As if you had come to terms with it, had analyzed it and decided it was something you could live with. You accepted the idea of your age like it was the best interest rate your mortgage broker could get you.

All day long you asked for birthday cake because that is what a birthday signifies to you, Permission to Eat Birthday Cake, and being the very mean mother that I am, I wouldn’t let you eat any until after dinner. This didn’t stop you from asking again and again, using several different variations on the question. At first you asked politely, even energetically, because you were certain that because it was your birthday I would have to give in. But I said no, if only because the power was making me dizzy, and that’s when you started pleading. For what seemed like hours. Eventually you threw your body face-down across my lap and screamed CAAAAAAAAKE to show me that you were willing to sacrifice your dignity. It was just that important. And normally I would tell you to snap out of it, because there aren’t many things in this world that are worthy of you making a fool out of yourself. It’s just, chocolate cake happens to be one of those things. Chocolate cake makes most women I know behave the same way.

For the majority of the last few months you have had some sort of illness, a cold or the flu or an endless runny nose, and it has made sleeping and eating and generally living life hard for everyone around you. But earlier this month your run of sickness finally stopped, and oh my God, are you a different kid. We have watched your personality explode over the last few weeks, and where there was once this tired, grumpy lump of white cells is a wild, hilarious fireball who knows how to electrify a room. Mornings were always the worst, you’d fight getting dressed, but now when it’s time to start the day you act like you’ve already had your coffee. You get to wear a NEW SHIRT! A NEW LELLOW SHIRT! LOOK AT THAT SHIRT, MOM! WHAT A BEAUTIFUL SHIRT! And then after you brush your teeth WITH A NEW BRUSH! A DORA BRUSH! I LOVE THE DORA BRUSH! IT’S A GREAT BRUSH! it’s time to take your vitamins, your NEW ORANGE VITAMINS! I LOVE THESE VITAMINS, MOM! THEY TASTE SO GOOD, THESE VITAMINS! Who are you? And why are you screaming? It’s all lowercase before 9 AM, okay?

This is how you talk about things now, you declare what something is, describe its color, determine if it is old or new, and then make a final announcement about whether or not it is worth your time. It’s a shirt, a blue shirt, a new blue shirt. You love this new blue shirt. How pretty, this new blue shirt. Or it could go the other way: It’s a cup, a green cup, a not new green cup. You do not want the not new green cup. You don’t like it, the not new green cup. It’s not great, the not new green cup. And it’s those monologues that we usually try to cut short because you seem to think that we’re not getting just how much you don’t like something, just how not great something is. You want to make sure that we understand that your mind is made up, and if given the chance in this instance you would go on and on to detail exactly how unjustifiably substandard it is, this not new green cup, until you had used up every molecule of oxygen left on Earth. There have been many days when I did not think you would ever stop talking, days when you outspoke your own father. Do you have any idea how difficult that is to do? It’d be easier to drink the entire Pacific Ocean without stopping to take a breath.

This month you’ve mastered the act of memorizing the books we read to you, and often you will read them back to us, not always word for word, but always understanding what is happening on each page. Sometimes when I’m lazy I’ll try to skip whole sentences, and you always catch me and force me to go back and read it the right way, which is no fun at all because there was a good reason I skipped it in the first place, BECAUSE IT WAS BORING. Do you have any idea how much of your life you could waste in college if you force yourself to read every sentence? Have you ever seen the Iliad? People who read the whole book are people who do not own televisions, and those people are probably the same people who think it is uncivilized to talk about boogers. Very sad people. You do not want to be one of those people, Leta. And so I challenge you to skip a sentence every now and then. Save that brain power for more important things, like setting your farts on fire.

As we all begin this new year together, I want you to know that while the last year was pretty difficult for your father and me, difficult in terms of things that have everything to do with being an adult, the last year was the best we have had with you by far. I had been worried that this would be a tricky year, because legend has it that two-year-olds can be repulsive human beings. I have known many two-year-olds in the past who had me convinced that I wanted to give birth to a full grown 30-year-old man. So I had no idea it could be so marvelous, so full of off-key songs and belly laughs and racing each other down the cereal aisle. And while there have been plenty of those horrible moments that you’d expect living with a human being who does not yet know the difference between her mother and a paid butler, there have been so many more that have made your father and me question whether or not life could get any fuller. You have brought him closer to me, and not just because we’re here in the trenches together, dodging your bombs and gunfire. I see how much he loves you, how he looks at me when you do something funny so that we can share that brief moment together. Living with you has been something else we have fallen in love over, and even more than our favorite music or the sushi we like to eat when we go out, you are what we have in common. And every night after we put you to bed and settle down to watch a show or read a book, your father and I will first talk to each other in your voice, will repeat something ridiculous you have said during the day, because we miss you already.