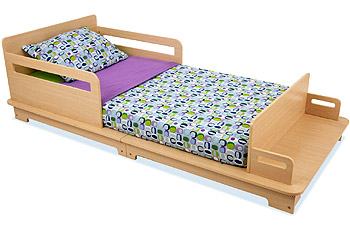 Recently I have received many concerned emails from people who do not understand why Leta was, up until a week ago, still sleeping in a crib. I think I’ve covered this maybe once or sixty times, but I am very busy being lazy, and generally if you want to know why anything is the way it is, I’ll get around to answering you once I have recovered from all this blinking I have to do.

I knew that transitioning Leta from a crib into a regular bed was going to be intense, and I have put it off because she didn’t seem to care that she was still sleeping behind bars. Not once has she ever tried to climb out of the crib, and yes, I am fully aware of how lucky we are because of that. My sister’s twin boys started climbing out of their cribs when they were 10 months old, would walk into the kitchen in the middle of the night and throw skillets down the stairs to the basement. Because they liked the way it sounded. To survive life she had to chain them to a radiator at night. And whip them with long slabs of raw beef.

Leta just hasn’t ever been physical that way, hasn’t ever understood the need to go exploring like that when all she has to do is repeat a few annoying sounds for several minutes to summon her personal chauffeur. She isn’t a kid who climbs dressers or scales kitchen counters or jumps from the top of the piano. And so there really wasn’t any danger in leaving her in a crib for as long as we did. In fact, I think she would have very much liked to live inside of it if we would occasionally stop by and refill her sippy cup.

I was also loath to buy any of the toddler beds that I have seen in stores around here, beds with large butterfly-shaped headboards or frames stenciled with flying unicorns. There is a dearth of stores that sell both good-looking and affordable furniture in Salt Lake, and it wasn’t until I was browsing a few of my favorite interior design websites a few weeks ago that a brick fell out of the sky and knocked me awake. I realized I could find what I want online and have it shipped to my house. Also? Did you know? You can buy a loaf of bread THAT IS ALREADY SLICED?

So I ordered this toddler bed online (free shipping!) and within seven days someone had dropped it off on our porch:

We didn’t hear the delivery guy knock, and as we were walking out of the house to run a few errands we noticed a large box leaning up against the side of the house. Jon turned to Leta and asked in a hyper, animated voice if she had any! idea! (!!) what this was because Plan A was to convince her that the toddler bed was none other than Jesus Christ. She acted completely uninterested, and as she rolled her eyes into the back of her head she answered, “Um, Dad? It looks like a box.” Like, whatever. And then she got in the car and drove off to college and now she doesn’t call me anymore.

Plan B: Start drinking at noon.

The following morning we took down the crib, and Jon assembled the new bed. I thought I was going to have more emotion around this milestone, but it just didn’t happen. I don’t miss Baby Leta, although I do have many great memories of her, that little screaming frog who screamed a lot every day with the screaming. I’m just really in love with Toddler Leta, and maybe I’m too enthusiastic about what’s happening right now to be sad about the fact that so much has already passed. Maybe it’s because Plan A finally worked, and she got so excited about the new bed — the BIG! NEW! BED! LOOK AT THAT BIG NEW BED! — I was really happy to see the crib go.

When I got her ready for her nap that afternoon, I talked to her about what was happening, that she was going to sleep in this new bed, that it was pretty much just like her other one, except it was a little bit closer to the floor. Her eyes got really big and she said, “THIS IS GOING TO BE SO FUN!” Oh, Leta, I know. Wait until I introduce you to tequila.

And then, the struggle I expected never happened. There has been no crying or getting out of the bed in the middle of the night. None of it. Occasionally she will wake up and not know where she is, and her response to this is to scream out, “WIPE MY NOSE!” Which means, please come show your face, woman. It’s not exactly an I love you, you are my everything, I recognize all that you have sacrificed to give me this life, but it’s close enough.