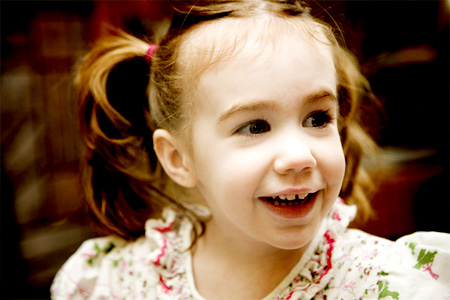 A few days ago you turned thirty-seven months old. I would have written this earlier but I have been in bed for four days with the worst sinus infection I’ve had in years, and it’s tough, tough work watching from the bed as your father takes care of everything, I AM NOT RELISHING THIS ONE BIT. I can’t remember the last time I was this sick, sick enough that I haven’t been able to get up and dress you in the morning which has always been one of my favorite parts about having you around. I love putting you in your little denim pants and Converse high tops, love parting your hair evenly into little curly ponytails. Your father normally does a terrible job dressing you, often pairing purple shirts with green pants and pink shoes. Remind me to tell you about what he was wearing the very first time I saw him, this will explain SO MUCH MORE THAN IT SHOULD.

But these last few days he has really impressed me, and each morning he has dressed you in actual dresses, ones given to you by friends and family who are very worried about the high tops. Dresses with ruffles. And bows. And because I am not a huge fan of little frilly dresses this was an incredible novelty to you, and more than once you have twirled around the living room shouting I LOVE THIS CUTE DRESS! Leta, you can wear the dresses. Just promise me, PROMISE ME, you will not start singing Phantom of the Opera. Or selling Avon.

You are very quickly approaching the age when you will be the same number of months old as your father is in years, which means that in order to count that high you’re probably going to need a calculator, and even then you’ll have to take a break halfway through. I like to tease your father about his age for a few reasons. One, because it is fun. Two, because nothing makes him more uncomfortable than the thought that the woman he married was in third grade when he was busy getting to second base after the senior prom. That is pretty gross when you think about it, that he was in high school well before I even started kindergarten. But it worked out perfectly for us because he’s a lot younger than his years, and me? I’m just a mean old crone who throws rocks at cars. We meet somewhere in the middle.

This month you continue to delight us with your enthusiasm for life, and often your father and I have to check with each other to see if we have heard you correctly. One morning I told you we were going to the bank and you said, “I get it! The bank! That sounds like a great idea!” Generally you are this perky when we make plans to leave the house, often telling us that you love wherever it is that we’re going, even if you haven’t ever been there. Sometimes I’ll push back and be all, oh really? You love the dog food store? WHAT’S IT LIKE? And your eyes will get impossibly wide as you say something about it being really big, the big dog food store. Good cover, kid, although I’m not buying it because a shoe box would be big to someone who is only three feet tall.

This month we re-enrolled you in a gym class, the same one we had you in about a year ago. Last week was your first class, and both your father and I tagged along to see how well you would take to the other kids and the program, and we were both so stunned with how much different you are, at least in terms of being willing to try things physically. A year ago you were still new to walking and had a hard time even taking a step off a two-inch gym mat by yourself. This time you ran to each different station ready to climb and tumble, albeit still very tenderly. Not unlike last year you were the most tentative kid there, the one who was much more interested in figuring out whether or not something had the mechanics to hold your weight before you trusted it with your life. One of the most distinctive memories I will have of you as a kid is the picture of you in the gym huddled over the joint in the balance beam, inspecting how the two pieces of wood fit together, while all these crazed, barefoot boys are flying horizontally through the air behind your head. You unaware.

This month we also filled out an application for preschool, something we hope you’ll get to start later this year, and late one night your father and I filled out several pages full of questions. We had to discuss several things, including what we hope you will get out of the program and which class we think would be right for you, and then we came back to the one question we saved for last: How would you describe your child’s personality? Your dad wouldn’t let me write “HAVE I GOT A URL FOR YOU!” so we sat there and tried to come up with a way to sum it all up. And we didn’t even know where to begin. It was one of the hardest questions I’ve ever been asked because there were only three lines for the answer, and I felt like I was trying to describe a rainbow to someone who has been blind their entire life. And I didn’t know if they were trying to mess with all these parents, because I know I’m not the only one who sat there staring at that question thinking back over every moment I have lived with you, the screaming and the singing and the way you call a lake a “lape” and a river a “ribber,” knowing that whoever gets to spend their days with you will be transformed by the experience, and that the only right answer would be: You will not be disappointed.