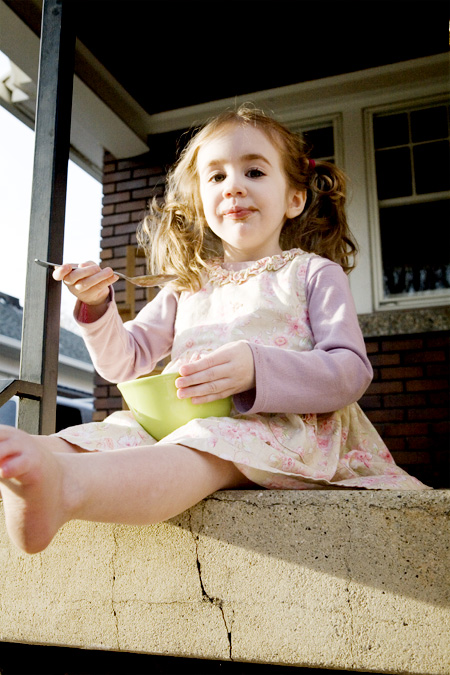 Yesterday you turned thirty-eight months old. We celebrated by eating a lot of ice cream which is not much different than how we celebrate every day, let’s be honest. I’m sure we’re breaking all sorts of rules by letting you eat ice cream as frequently as we do, but I don’t really care about those rules. Those are the same rules that say you shouldn’t walk around barefoot in Wal-Mart, the same rules that would have you refrain from belching during a prayer or chewing a piece of gum that you found on the sidewalk, and I’m sorry, but this is America, and those rules can suck it.

Yesterday we took you to the doctor to get your three-year physical check-up and vaccinations, and while we were there they weighed you and measured your height. Turns out you’re kind of short for your age, and this surprised all of us, including your doctor. He says that parents who as tall as we are usually have taller kids, but that maybe because both your father and I were late bloomers you’re going to experience a huge growth spurt a bit later than your peers. Or maybe? Maybe we just gave birth to a short child. And when he said that he acted like he was having to break us the bad news. Our child will not be the valedictorian of height. I suppose this might be devastating to some people, having a short child, but I think there are much more important things to focus on, like will you grow up to be one of those people who is constantly hitting the brake for no reason? Or will you freak out if one of the foods on your plate touches a different piece of food? WHEN YOU GROW UP WILL YOU LISTEN TO THE ADULT CONTEMPORARY STATION? At least being short does not make you in and of itself a distinctly annoying person.

We had to wait quite a while at the doctor’s office because they were all running behind schedule, and there was a time when that kind of wait would have turned me into an absolute basket case. Keeping you occupied used to be so much harder than it is now, and we were so proud of you yesterday for being such a good kid. When we were finally lead to one of the rooms you started to freeze up a bit with the memory of a few months ago when we had to take you there for your bladder infection. “IT WON’T HURT! IT WON’T HURT!” you repeated over and over, and we lied through our teeth, told you it wouldn’t hurt this time, and then that lovely German woman walked in and stabbed you in the thigh with a needle. You flinched, and then shrugged like it was no big deal, just a little flesh wound. And then you reminded us about that one time you crashed your helicopter in ‘Nam.

In a couple of weeks we’re going to be moving into our new house, our NEW! BIG! HOUSE!, and you seem to be very excited about this, especially about your new big room and the new big “Play Park.” Every time you have been in your new room you’ve thrown you arms wide and run in circles as if you could not believe that there was this much space anywhere in the world. And it is a little obscene, the space. It seems a little, I don’t know, like we’re being allowed to eat chocolate cake for every meal. The backyard seems to go on for miles, and this summer we’re going to have a lot of fun back there swinging and blowing bubbles and watching Daddy throw the basketball at the hoop only to miss it by four feet. You won’t be inheriting any sort of skill for basketball from either of us, that’s for sure, but I guess it doesn’t matter since you’re going to be short anyway.

Finally we have reached a point with you where we are having to stop ourselves from saying particular words because of your fondness for repeating them. It’s not that we curse a lot, well okay it is that. It’s exactly that. We cannot go a single sentence without inserting some sort of colorful exclamation, and your favorite one to throw around is OH. MY. GOD. And you say it just like that, with the punctuation, and your accent is very much a Southern one so we don’t have to guess which parent is the one who says it the most. In this community, a very Mormon one, an OH MY GOD is just about as bad as any four-letter word in the English language, as it is taking the Lord’s name in vain, and that violates one of the ten commandments. So when we’re in public and you stub your toe you should yell something different than OH MY GOD because people are going to look at you very sternly, whereas if you just scream COCKSUCKER no one will even notice.

Last week we got some great news about my brother who got a job here in Salt Lake City. He is going to be moving his wife and four children down here from Seattle where they have been living for the last eight years, and for the first time in almost two decades my entire family will be living in the same city. This means that you’ve got four more cousins to boss around, and holidays with my brother are always more exciting if only because he’s an even louder talker than I am. And way more Southern. He was in town last weekend looking for a house, and when we drove him up to see our new one I realized that I am going to love having him around. And because our whole family is going to get to see so much more of each other, because you’re going to get to grow up knowing his kids, I don’t think I’d rather be anywhere else in the world right now, right here in this little desert city. I feel like there is so much to look forward to, and having experienced several times in my life when I couldn’t say that, I can confidently say that this is the best feeling in the world.