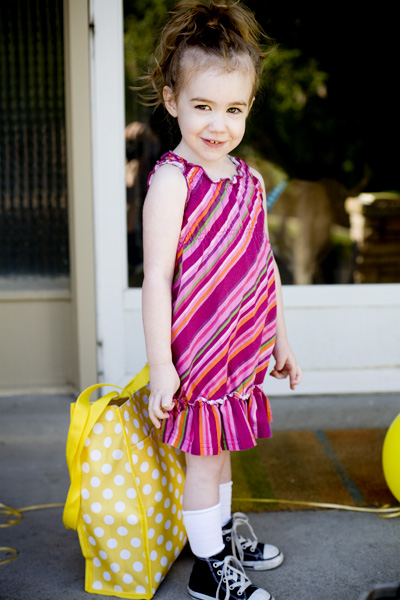 A few days ago you turned forty months old, and just yesterday you started pre school. This is something we have wanted to get you involved with for a while, mostly because you already know everything and more than I did when I started kindergarten, and I’m pretty sure you’re bored here at home. We also don’t know many kids who are your age and are thinking that this will be a great opportunity to let you make some friends. And then there’s the real reason we decided to enroll you, the fact that you can always fetch a higher price for kids who are educated than you can for the stupid ones, and if we ever have to sell you I’d like to make enough to pay off all the bills and have a little left over to buy some press-on nails.

We wanted to make sure that you would be up for such a huge change, and we’ve been talking about School with a capital S for several weeks now. Yesterday morning I went over the major points with you again before we left and told you about all the books you’d get to read, about the playground with the swings, and the blocks and toys and crayons. You hung on every word, nodded vigorously at the thought of all those books, and when I asked you what you thought you said, “And we’ll get to watch TV, too, huh?”

Maybe you really are my child after all.

I’m pretty sure they have a TV, although I’m guessing that most of the other parents would prefer their kids to do more learning than watching, and yeah, I get it, there is a lot of learning that needs to be done, but if I find out that the teachers have let you watch an episode or two of “Sesame Street,” I’m certainly not going to write any letters to the government over it. I’m going to save those letters for something more pressing, like, Dear Mr. Congressman, I can’t buy liquor on Sundays. Please fix this.

Your first day went relatively well, and other than a rough transition when we dropped you off — a few tears, some spider-like crawling up my legs — you had a great day, made a few friends, and got to play with what seemed like a million new toys. The highlight of your day, though, was when the teacher showed you the toilet, and it wasn’t just an ordinary toilet. It was a Dora potty, with a cushiony Dora seat, and it had Dora on it. With Dora. And when we picked you up you didn’t want to leave without showing me the Dora potty, so I was all, fine, let’s have a look at this Dora potty. So we walked into the bathroom, and you ran right over to it, and before I could stop you, you hugged it. You hugged a toilet.

Leta, most marriages don’t know that type of devotion.

A couple of weeks ago your father got it in his head that he wanted to potty train you, suddenly, without any preparation, even though you know and I know that you’re just not ready yet. So I stood back and let him try it, watched from the sidelines as you refused over and over again to have anything to do with it. For two days straight he had you do nothing but sit on that potty, and you gleefully played along knowing that the moment he turned his back you were going to hop up onto the couch or bed and go to the bathroom there. And so he finally gave up and agreed to postpone his efforts for a few weeks, and I most certainly did not tell him that I told him so, did I not tell him so? I think I told him so, wait, let me check, yep, right there, that’s when I told him so, and maybe he should listen to me next time. I didn’t say any of that, I just smiled and felt superior. With this type of teamwork, Leta, your father and I can do anything.

For the past week or so both you and I have been very sick with a cold, a fever, and an endless hacking cough. I am so tired of this, and it seems like the past six months have been nothing but a string of illnesses, sinus infections, and stomach bugs. The worst part of it is what it does to your personality, and all of your cute and affectionate mannerisms get lost in a wave of mean and abusive outbursts, in a lot of wanting things, but not wanting things, and then wanting things again. THE THINGS, THEY ARE WANTED. BUT DO NOT GIVE THEM TO ME BECAUSE I DO NOT WANT THEM. A lot of this is just because you are three, and three-year-olds are not known for Handling Things Well. You know what three-year-olds are good at? Violently hammering away at their parent’s ability to remain civilized. I owe you my ability to swear without actually moving my lips.

While being sick is not ever as fun as say, balancing beer bottles between the dog’s ears, it does allow me the very infrequent opportunity to sleep next to you, and one afternoon last week we both napped next to each other for a few hours on our bed. We both snored through our congested sinuses, and at one point you rolled over, grabbed my arm and pulled it over so that my hand was cradling your face. And then you fell back asleep underneath my fingers. That was just, I don’t know, exactly what you hope being a parent is going to be, and it complemented the conversation we had when you woke up, when I said, hey you, I think you’re cute again, and you screamed I AM NOT CUTE AGAIN, like I had just accused you of owning a John Tesh CD, and you continued to scream it until I finally agreed to say that weren’t cute again. I promise you, Leta, that if you’re ever cute again, I’m not even going to point it out. I care that much about you.