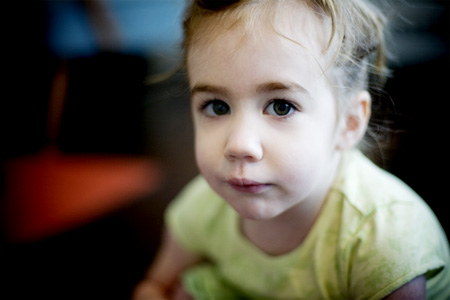 Today you turn forty-one months old, and wait a minute, I don’t even remember the last time I wrote you a newsletter on the third day of the month. Usually I’m way behind schedule and writing you two or three or eight days after you have turned another month old, and let me check … nope, that month was a whole week after … not that one, or that one … oh my god, I haven’t been on time with a newsletter in 17 months. That is beyond pathetic. There is no excuse for this poor performance, and I would apologize for the example I’m setting, but it probably doesn’t matter. Both your father and I are Olympic Procrastinators, and regardless of my example, you’re going to fight a genetic urge to put things off until they are almost past due. Consider it one of many inherited defects, like your freakishly long toes? Those you got from me. That gross habit you have of snacking on licorice? That one came straight from your father.

I will look back on this month of your life as The Month of GEORGE! as you and he have become special buddies. At first I thought you weren’t ever going to take to that kid, and for a few weeks you hated it when he even looked at you, but I noticed the change one afternoon during our first trip to the new Ikea when we left GEORGE! to look after our large purchases while we ran to get the car. When we backed out of the parking space you started screaming, “WE LEFT GEORGE! WE LEFT GEORGE!” and even after I assured you that we were going right then to pick him up, you tried to wrangle yourself out of your seat, presumably to get out of the car and find GEORGE! It wasn’t until we met him at the loading zone and you saw him standing there that you calmed down, and that’s when you took a deep breath and said, “I’m okay, I’m okay.” As if watching out for him was your responsibility, and was that ever a close call. Time to stick a microchip in his butt.

He often likes to sit with you and watch entire episodes of Dora, and although he’s probably not too proud to admit it, he can sing along to every song almost better than you. In fact, whenever Dora turns to the camera and asks the audience a question, GEORGE! always has a thoughtful answer and has only occasionally told her to shut it, which I think shows incredible restraint on his part. Because when Dora asks me questions I’m usually tempted to throw a rock at her head.

A few days ago it was time for you to take a nap, but GEORGE! didn’t know this and turned on another episode of Dora for you to watch. I walked in, paused the television, and said, no, not now, it’s time for bed. Your lip quivered as you asked, please, could you watch more Dora, and I said again, not right now, maybe later. That’s when you would normally turn to your father and start crying, but your father was in the other room. Only other person nearby was GEORGE!, and you were desperate, so you tried to get GEORGE! on your side, YOU ASKED HIM TO OVERRULE ME.

I could have been insulted, but this was touching for a few reasons. One, how cute is it that you reached out to him like that? That you thought him a close enough friend to back you up? Two, this shows that somewhere along the way you’ve learned a game of numbers, that two is stronger than one, and you’re starting to realize that you have have options. I think this demonstrates remarkable progress on your part, because normally you dive head-first into Option Last Hope: FALLING APART. And let’s just say that this particular option is not very becoming.

For the last four weeks you’ve been going to preschool every morning, and although that first week was tough, you have since loved the idea of heading out every day to see your friends. I think preschool has been a fantastic addition to your life because suddenly you started eating, not only every day, but three times a day. In fact, sometimes you eat the entire lunch I have packed for you, and when you get home you ask to eat again. You’re asking to eat. Food. I know you’re going to read this years from now and wonder why I’m making such a big deal out of this, why this is so special to me, because duh? Who doesn’t like food, right? And I want you to do me a favor. When you read this and you start to have that thought, I want you to run right out to the nearest farm, grab the youngest, wildest pig you can find, pick it up, and try to snuggle it to your chest. See how it wriggles and kicks and scratches at your face? Hear that piercing grunt? THAT IS MY LIFE.

Your teachers have sent home several drawings and projects you have done, and have even given us some homework to do with you, like, we’re supposed to practice throwing a ball with you? I mean, yeah, you’re not good at throwing a ball, but look whose kid you are. You’ll never be good at throwing a ball. They say you’re getting along with the other kids, and that you’ve even agreed to play in the sand, which shows what magicians those people are. You’ve never liked sand, because it’s dirty. And it gets on things.

They’ve also mentioned more than once that you’re a great kid, that you’re sweet and one of the most incredibly gentle kids they’ve ever met. And I know that when you read these letters you may not believe that you’re this gentle little being, but there’s no truer word to describe you. Gentle. It seems to go against every story I have to tell about you, and I don’t mention it nearly enough, but that is the impression you leave with people. You have a softness about you that almost startles people, because it’s very different from the loud and often jarring movements of many kids your age. So I want you to know it, from me, the one who takes notes and writes about all your other faces, that I love your gentle one the most, and I know that it is the real you, even when you kick and scratch and fall apart.