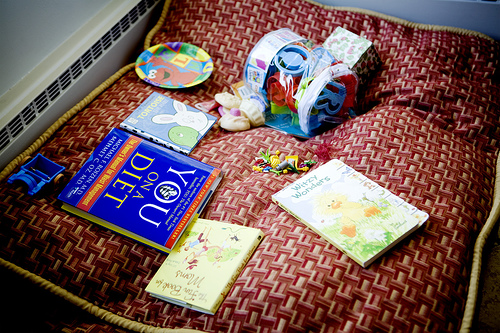 “Why are you putting all of those things on Chuck’s bed, Leta?” I asked.

“Because it’s My Party,” she answered.

Chuck has three dog beds in three separate areas of the house, so many because I wrongly believed that if he had options he wouldn’t need to jump on and off our bed at night. Does your dog do that? Hop on and off your bed, over and over again, because he is part Labrador, part douchebag?

If we could get him to stop this one obsessive habit I could probably halve my dosage of brain pills.

Leta has now staked her claim on all three beds, including the relatively new one above that we have tucked into the corner of the kitchen. She carries around everything you see on that dog bed, and has at one point or another slept with each item, including, yes, our copy of You on a Diet. She calls it the Big Blue Book, and sometimes after school she will run inside, head straight for that book, and then spend the next half hour pretending to read it to a group of people. I think she learned to do this by watching the teacher at school read books to the whole class, the book upright with the pages facing away from her, but I don’t know what it is about this specific book that she is drawn to. The intense color of the jacket? The gigantic letters in the title? The chapter devoted to inflammation of the intestinal wall? Because that one happens to be my favorite. It reminds me of Hemingway.

We’ve been keeping a running list of things Leta has asked to sleep with, and in the last year she has shared her bed with a frisbee, a bottle of shampoo, an entire set of Dora-themed dinnerware, a wad of cash, purses, new shoes, and a basketball. We figure that since she hasn’t formed an obsessive attachment to one specific thing, like a blanket or a doll, that this is her version of that normal childhood behavior. It’s less an attachment to things than it is an attachment to sleeping with things in general. There is always some weird object next to her head in bed, and I can see a future when she’s going to be thinking about bringing some strange dude back to her dorm room and ultimately chooses not to because she’s got a toaster oven on her pillow.

Who needs religion to keep you chaste when you’ve got eccentricities!

Last night we read her books in our bed after her bath, and when we were done she looked over at Jon’s nightstand, pointed to his copy of Freakonomics, and said, “Oooh, apples! I want to sleep with that book.” And since he had finished it a couple of weeks ago we let her, tucked her into her toddlerbed and set Freakonomics next to her head. She rolled over, hugged it, and then looked back at both of us and said, “You guys are my friends.”

You think you’re going to be prepared for the sheer incredibleness of such a moment, but it’s like, someone keeps setting off pipe bombs on your front porch and throwing rocks through your windows, and then one day out of nowhere they show up and mow your lawn. And you’re suddenly glad you didn’t shoot them last week.