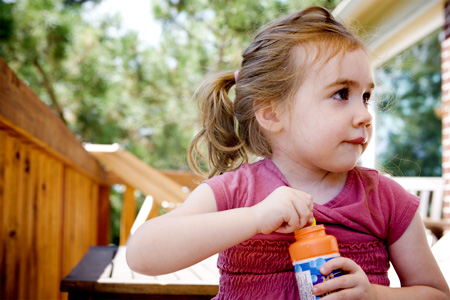 A couple of days ago you turned forty-three months old. I get a lot of email that asks me why I count your age in months, and the truth is, I do not have a good answer to this question. Because it’s easier than counting your age in days? Because if I wrote these newsletters only once a year I’d forget all the little stuff and end up saying something like YOU GOT BIGGER. THE END. When I started writing these letters to you my idea was to sit down at the end of every month to tell you about you, and the number of the month is just a way of keeping track of time as it passes. It’s not like your father and I sit around and go, do you remember month 34? That one was a doozie. Or how about month 21? I still haven’t recovered from that one! Although, you could sort of look at it as a way of counting out the prison sentence of parenthood, that we’re 43 months into a 216 month term, only 173 more months until we get to start charging you rent. Plus interest if you’re late.

This month you have taken serious interest in the dog for the first time. I have to admit that I have always been a bit sad that you could not care less about the animal who lives with us, maybe because I was worried that it was indicative of you not caring about animals in general. And I couldn’t imagine giving birth to a child who didn’t love animals even a little bit. The only reason we haven’t adopted 20 more stray animals is because YOUR FATHER WON’T LET ME, because his heart is made of cold black stone. He won’t even let me go to the zoo because I will talk for days about how we need to adopt the zebras, how we should bring them home and braid their manes and feed them ice cream.

You’ve suddenly started asking about Chuck when you wake up in the morning, as if you cannot start your day until you know where he is. When I say, you know, I have no idea where that dog is, probably moping around in black eyeliner, you will call out for him — CHUUUUUUUCK! — and continue doing so until he reluctantly crawls into the room, like, DOES SIR DESIRE MY PRESENCE? You’ve also been playing games of chase with him, and last night when you caught up with him you started to throw your leg over his back for “a fun pony ride,” but I stopped you. One, that would hurt the dog, obviously. Two, the look on his face was, this? THIS IS NOT FUN FOR ME. I LIKED IT BETTER WHEN SHE DISDAINED ME.

Month 43 was also the month when you officially dropped your nap. For good. There is no more napping. It’s like we’re being forced to give up pain medication, and the withdrawal is unbearable. Some days I still make you take some down time, and you and I will go down to our big bed together and lie there quietly for an hour, but even that quiet time is becoming a nuisance. I’ll lie there with my eyes closed while you tap my forehead with your index finger, a rhythmical indication of the fact that YOU. ARE. NOT. TIRED. And then it’s, can I have some water? Where’s my pillow? Where’s Chuck? Why is it dark in here? Why is Daddy upstairs? Why is the blanket this color? Why does the fan go so fast? Why is the window over there? Until I’ve had it and I’m all BECAUSE HEAVENLY FATHER MADE IT THAT WAY. NOW SHUT UP.

I vividly remember the transition from three naps to two, and then from two naps to one, and how each time I thought it was going to kill me. Because sometimes you needed that extra sleep, sometimes you didn’t, and the balance was so delicate that if we ever got it wrong you were not a very nice person. This transition is no different. A few nights ago after a long day with no nap you suddenly started to throw your body onto the ground. Over and over again. It got to be ridiculous, and I finally had to tell you, look, if you throw yourself face-first onto the floor like that one more time, I’m going to start laughing at you. And what did you do? A big heave-ho and all 32 pounds of you were in the air. So I scooped you up, cradled you like a baby and held you tightly on the couch. Within minutes you were asleep, at 5:30 PM, and you didn’t wake up until eight o’clock the next morning. Your father was like, what if she wakes up at midnight and won’t go back to sleep? And I was all, THIS IS THE EXACT REASON THEY MAKE BENADRYL.

You’ve also started saying “honey” quite frequently, as a go-to word whenever there’s silence, except you say it like “hun-ehhhhhhh,” like you’re stoned out of your mind. We couldn’t figure out where you picked it up, and then we learned that there are two sisters in your class at school, and the younger one calls the older one honey. You know that you’re being funny when you say it, and you’ve even started to pronounce other words this way: mommy is mum-ehhhhhhh, daddy is dud-ehhhhhhh, puppy is puh-pehhhhhhh. Out of nowhere you’ll say one of these words, like we’ll be driving to school and without any context whatsoever you’ll suddenly go HUN-EHHHHHHH! Or you’ll wake up in the morning and call out to me from your room, MUM-EHHHHHHH! Followed by hysterical laughter. And I know you’re in there smiling to yourself, like, these people have no idea how lucky they are to have me in their lives.

And the thing is, you won’t say hun-ehhhhhhh for anyone else. You only do it in front of me and your father. Earlier this week I asked Grandmommy if she had heard you say it during the time that you were staying with her while we were in Los Angeles. And she had no idea what I was talking about. Honey? What? And for a second I was worried that maybe you’d decided that you were over it, that honey was like, so seven days ago. But the moment Grandmommy left and you were alone with us for the first time in five days, you held out your arms in a welcoming gesture and shouted MUM-EHHHHHHH! DUD-EHHHHHHH! Our little inside joke. Leta, we know exactly how lucky we are to have you in our lives.