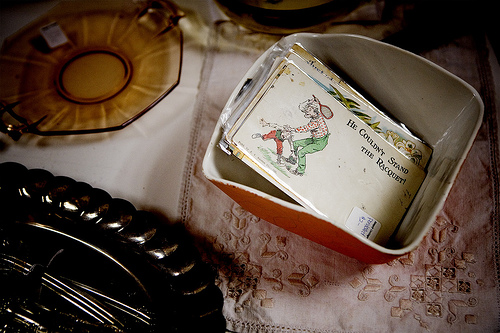 One of the (very few) highlights of our trip was the time we got to spend with our friends Maggie and Bryan, and the morning Maggie and I went shopping for antiques. Several years ago this would have been my idea of hell, hours of walking around a dusty shop looking at things that used to be owned by other people, people who could have been suffering infectious diseases, the remains of which could still be sitting on the handle of that hand-painted porcelain teapot. But something changed, I became really interested in interior design, grew to love the history of vintage objects, and realized I’m more likely to catch a nasty germ from owning a pet who would look at human feces and think, “Dessert!”

I didn’t take many photos of San Francisco, I think because I wasn’t inspired and had a hard time concentrating on anything but wrangling a child who many of my readers think is autistic. I get that email at least three times a day, the “I have been wary of saying anything, but I can’t help myself, and you really need to come to terms with the fact that Leta is autistic.” And I understand the motive behind such email, that these readers are concerned and are trying to offer helpful advice. I’ve actually thought twice many times in the past about whether or not to tell a specific story about Leta because of the innumerable all-caps declarations of SHE’S AUTISTIC! I’d get in my inbox.

But I want to reassure those readers who have sent me that email and all those readers who have yet to and will eventually send me that email that we have had Leta tested and observed by occupational therapists, physical therapists, neurologists, a handful of pediatricians, and a slew of child development specialists, and every single one of them was quick to assure us that this isn’t a case of autism, it’s just a case of a really difficult kid. The only diagnosis they could come up with is that she is more stubborn and sensitive than the average human being. And there is nothing we can do about it except learn to live and deal with a child who has this type of personality. She’s difficult because of some combination of Jon’s DNA and mine, his tendency to want to know exactly why? why? why? and that fundamental spirit in me that rebels against anything that tries to control me. Hello, little mirror of your parents.

There was something about walking through those antiques shops with Maggie that opened me up (I owe Maggie a huge thanks for suggesting that small break from the kids), and I couldn’t stop taking photos, maybe because if I kept the camera in my hand I wouldn’t buy everything that I saw. My ideal home (one I’m trying to make here now) would be a mixture of mid-century modern furniture and vintage accessories, like a Barcelona chair sitting in the corner of the living room next to a short stool some unknown farmer crafted out of barn wood, a crocheted tea towel tucked underneath a teacup that looks fragile enough to shatter under the weight of sunlight. Holy shit, that last sentence sounds like such a load of crap, like I’m someone who spends her free time re-reading Wuthering Heights instead of watching “The Hills.”

Here are some of the vignettes I’d love to have in my own house: And here are the two things I couldn’t leave the store without: