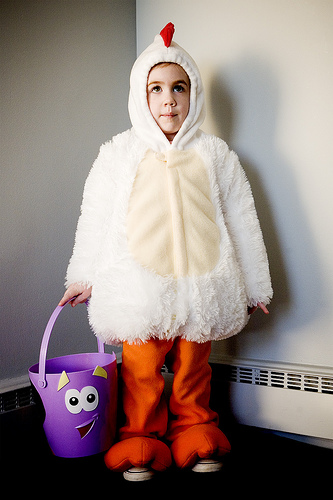 This year was the first time all three of us participated in the official act of trick-or-treating, and before I go any further can I just say that the fun we had last night is exactly why I would recommend that someone have children. I’ve got this friend from high school who doesn’t have kids yet, and she’s expressed to me that maybe she’s not the type of person who should ever have children, and I was all, do you like to sleep? And she was all, well, duh? And I was all REFILL YOUR BIRTH CONTROL.

But last night was filled with such joy, such brilliant, tingling happiness, the kind of experience that is so fulfilling that you want everyone you know to go through something like it. And so today I would tell my friend, look, you need to go out, find some guy who loves the way you look in the morning, can forgive you when you lose your shit, thinks that the smell of your neck is better than a football game, and then take that guy and have a lot of grueling sex, over and over and over again, so much that when you roll over next to him with your voluptuous naked body he’s all NOT AGAIN, IT WOULD TAKE AN ACT OF GOD, WOMAN, and then four years later you’ll get to watch your kid waddle around the neighborhood going, “Bawk! Bawk!” You will not regret it. This is the first year that Leta really understood what this holiday is all about, and last year we didn’t even get to attempt trick-or-treating because she was sick. Jon and I debated over who would get to accompany her this year, and then we figured, we’re not going to be gone that long, Leta can only walk so far, why not leave a bowl of candy by the front door and trust people to take only one piece of candy? This is Utah, a place where your eternal salvation depends on whether or not you are honest about the candy. You take that extra Snickers bar and you might as well just go murder your cousin and steal his kidney, IT’S THE SAME THING.

That last sentence should be read with a thick Southern accent. So we zipped up her chicken costume and headed out, and immediately she started asking if we were headed to Grandmommy’s house, because why else would we be this excited? Do you even know what they’ve got at Grandmommy’s house? FREEDOM, THAT’S WHAT. She can do whatever the hell she wants to at that place, and if we head over there now maybe there’d be enough time to bathe in a tub of chocolate syrup.

We had to explain that no, we’re not headed over to Grandmommy’s Resort Spa, we’re just going to knock on every door in the neighborhood and demand that they hand over treats. And she said, “Oh.” Like I had just detailed the procedure a surgeon follows when he removes someone’s frontal lobe. Both made sense.

At every door I’d lift her up to ring the doorbell, and when the neighbor answered I’d ask, “What do you say, Leta?” She’d quickly go through the rolodex of words in her head and say, “Thank you?” And I’d explain that no, this is when you say trick-or treat. And then they’d ask about her costume and I’d say, “What does a chicken say, Leta?” And again she’d rummage around in her brain for the answer, this time stopping on, “Trick or treat?” So this goes on and on at several houses where she’s often saying BAWK! BAWK! when she is supposed to be saying thank you, when finally at one house I ask her what she’s supposed to say when they answer the door and she just vigorously shakes her head, like THIS SCRIPT IS TOO CONFUSING.

But every time they handed her a piece of candy she just could not believe it, and would hold it up to me with the biggest eyes, the most incredulous look, like THIS CANNOT BE LEGAL. Halfway through our route she had so much candy in her bucket that it was too heavy for her to handle, so she stopped dead in the sidewalk, her orange chicken legs as bright as a traffic cone, and said to Jon, “You carry it.” It was about time he started to do some work.

I can barely explain what it was like to watch her waddle up the steps to people’s porches, partly because there were those years of her life when I didn’t know if she’d ever be able to waddle. But also because of the pride I feel that she is my daughter. People with kids often tell people who don’t have kids this thing about how when it’s your own kid, there’s this feeling, and you can’t explain it, it’s just different. Doesn’t matter if your kid is biological or adopted, it’s your kid and the instinct you have concerning them is primal. You see them and the feeling you have inside you reaches to the very center of your gut. All of that crap is so true, no really, it is, and it feels distinctly like that sickness you feel in your stomach after eating an entire bucket of candy.

Chuck did not walk with us through the neighborhood, but we did celebrate with him beforehand, and this here is the long-awaited Chuck portion of the program. This year’s costume is more traditional than the series from last year, and while getting him dressed we realized that all the fun is in the process. So we took it slowly: