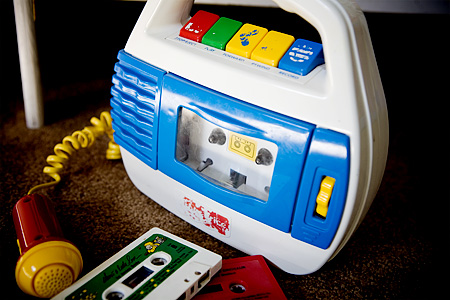 A few days ago you turned forty-five months old. Let’s see, what happened this month, hmm, let me think… is it worth mentioning that you have been sleeping with a Fisher-Price tape deck for the past week? Considering the vast array of ridiculous objects you have slept with in your life, this one doesn’t seem that odd. Except that it’s this gigantic piece of obsolete machinery, about half the size of your body, and during the day as you carry it around the weight of it is constantly pulling you to the ground. And yet, you will not leave it behind. You must have this cassette player with you at all times, so you’ll walk into the room dragging this awkward mechanical behemoth behind you like it’s some dead body you found in a field and are determined to give a proper burial.

It was a hand-me-down from one of your cousins, and had I known she was going to throw in a couple of old cassette tapes I think I would have intercepted this gift and set fire to it in the driveway. Because these tapes, they are full of perky Mormon songs written specifically to turn young Mormon kids into perky annoying shits. I know, because I used to be one, used to go around singing these songs as loud as my voice would take them, and Leta, it is a miracle that I am sitting here today with my face in its original form, a miracle no one tried to shut me up by hitting me in the face with sack of bricks. And it’s too late for me to tell you that you can’t listen to these songs, because you already love them, have played them so many times that the actual tape in the cassette has almost worn through, it’s just I’m tired of having to ask you to turn The Jesus down because I can’t hear the theme song to “The Hills.”

Music has been a running theme this month, and you are bringing home new songs from school at an alarming rate. Many of these songs are ones I have never heard, and to make matters worse, I think you’re mashing up three or four songs into one tune. I wouldn’t care except that you want me to sing along with you, and I’m all, first, please explain to me why there are goats in a song about friendship? Am I missing some metaphor? Because I think you just made that part up, and why you chose goats over some other animal is something I do not want to know the answer to. And second, half that song was in Spanish, and you know more of that language than I do, so you can just go ahead and pick your body up off the floor BECAUSE I DID NOT ROLL MY R.

So we’ve already established the fact that you don’t like dogs, that you only abide Chuck’s existence, but I’m beginning to believe that you don’t like any living thing, especially insects. Not surprising, since I once made my family leave a campsite because there were bugs there, and I’ll admit to being a little jumpy around spiders. But you are still talking about an ant you saw in your room two weeks ago, still making me promise that the ant will not get you, and after breakfast in the morning as we’re walking downstairs to your bedroom you’ll tug on my hand and say, no, not again, we can’t go down there, there is an ant, and it is waiting behind that door with a shotgun. It is in cahoots with the moth that hovered outside the window last night as we ate dinner, and together they plan to knock you over and suck the eyeballs out of your skull. Our only defense? To panic.

The last month has been an emotional and physical roller coaster ride for me and your father, and I have to admit that the stress has caused us to act a bit immature in certain circumstances, many if not all of them involving you. Sometimes I’ll take a second or two longer than you prefer to pour you a glass of water or retrieve a book that is on a high shelf, and you’ll scream, “BUT YOU HAAAAAVE TOOOOOO!” The logical, unemotional response to this behavior is to pick you up and lock you outside in the cold, because hello, you do not talk like that to anyone. But when I haven’t slept in a few days or have spent the morning crying, my response might be to stick my wet finger in your ear. Or maybe I’ll just walk up and lick your forehead. The other day I picked up one of your Dora dolls and dropped it on its head. I’m not proud of myself.

I want to say I’m sorry, and I am, but I think one day you’ll understand why and forgive me. About a week ago you and I were sitting on the couch reading books together when you suddenly looked up at me and said, “We’ll have a baby soon, huh?” And I really didn’t know what to say. I don’t know how much you understand about what has happened, that no, the baby we had talked about is no longer going to be coming to live with us. But I didn’t want to confuse you anymore than you already are about the whole thing, because for all you know babies suddenly show up on the porch in a box marked AMAZON.COM. It’s just that the weirdest thing about this whole grieving process has been how much hope it has given me, how it has made everything clear to me about who I am and what I want, and I know that having lived through this we will somehow make it happen, even if we have to order one off eBay. So instead of saying anything to you, I just nodded my head and wiped my tears.